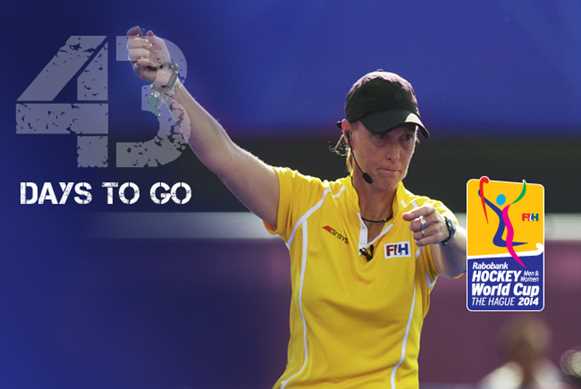 Lisa Roach and John Wright will be centre stage at the Rabobank World Cup, but they'd rather no-one noticed them

They are the people who keep the game flowing; the men and women without whom there would be total chaos on the pitch. If they do a good job they are unobtrusive; if they make a mistake then all eyes are on them. Umpiring hockey at any level can be stressful, at an event that attracts a global audience such as the Rabobank Hockey World Cup, such pressure is at its most intense.

John Wright from South Africa and Australia's Lisa Roach are top international umpires. They agree the main qualities needed to become an international umpire are an in-depth knowledge of the rules, a high level of fitness, mental strength, consistency and a good understanding for what the game and teams are trying to achieve. Smiling wryly, John adds, "thick skinned!" to the list.

Lisa also points to the importance of developing a good relationship with the players. "I always try to understand what the players are trying to do on the field and work with my colleague to get best from the game and myself. Most would call me a player's umpire; someone who is empathetic towards players."

Both umpires have seen numerous changes to the rules and the way the game is now played. This can have an impact on umpires as much as it does players. The physical demand on an umpire's fitness has been made greater by the increasingly non-stop nature of the game. "The first major change was the removal of the off-side rule. That made the game quicker and the self pass has added another element of continuity and flow to the game," said John.

For John, being an umpire is all about making the game a great spectacle. He says: "It may sound odd, but we are all working together to take the game to the spectators and to make it the best experience for everyone, whether they are spectators, players or coaches."

Both umpires have experienced highs and lows in the their international careers. Lisa, who is one of the most experienced female umpires in the world, says: "I enjoy umpiring fast, free flowing teams that really test you, but in terms of my career highs to date, hands down it is two special highlights – the last World Cup Final in Argentina and the Gold Medal match at the London Olympics." For John, the World Cup finals in Moenchengladbach and Delhi, and the Olympic final in Athens rank among his favourite events.

And when it comes to moments the umpires would most like to forget Lisa's worst moment was a ungraceful landing on her backside during the World League Finals in Tucaman, while John is quick to hold up his hands and admit his moment horribilus came during the the London Olympics when Spain met Great Britain in the quarter finals. A series of controversial decisions during the match meant he was surrounded by angry Spanish players when the whistle went.

For players who think a move into umpiring might be for them, John had this advice: "If you want something easy then you shouldn't choose umpiring. If you want to challenge yourself and make a valuable contribution to the game then umpiring will give you much satisfaction." Lisa added: "Listen to your umpire coaches. They can be your greatest support and can keep you motivated to keep achieving your goals. There can be an exciting pathway and umpiring career if you are prepared to take the journey."