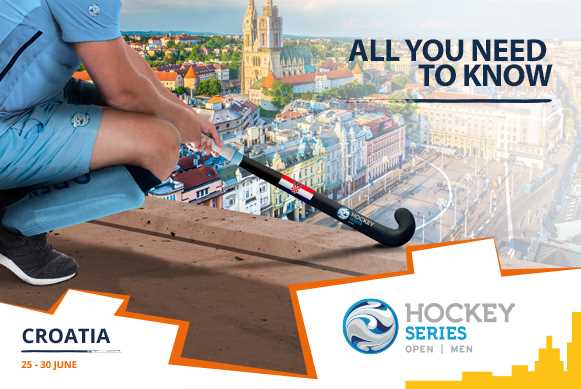 The third of the International Hockey Federation (FIH) Hockey Series Open events takes place from 25-30 June at the Sports Park Mladost in Zagreb, the capital of Croatia.

With the prospect of Tokyo 2020 Olympic Games qualification a distant ambition, teams will be aiming for the top spots in the knowledge that 15 nations from the Hockey Series Open events will qualify for next year's Hockey Series Finals. Add in the opportunity to win vital FIH Hero World Ranking points, fans can expect fierce competition between these European rivals.

This will be an intriguing encounter between five men’s teams who will be familiar to each other through continental competition.

This will be an intriguing encounter between five men’s teams who will be familiar to each other through continental competition.

At 19, Austria are this event's top ranked team in the FIH Hero World Rankings and have players with a wealth of experience under their belt. Michael Korper is the talismanic goal-scorer and, along with Benjamin Stanzl, was one of the standout players for Austria’s indoor squad who claimed the Indoor Hockey World Cup earlier this year. Austria finished seventh in the 2017 Rabo EuroHockey Championship, drawing with Spain and Ireland, both of who are ranked several places higher in the world rankings. Their experience at the top level of European competition will stand them in good stead for this challenge.

Wales (WR:24) are a team with big ambitions. They finished a respectable ninth at the Gold Coast 2018 Commonwealth Games, beating higher ranked South Africa in the 9-10th place play-off. This was after they had narrowly lost out in the last minutes to the world number seven team England in a 3-2 thriller. Recent preparations for the Hockey Series Open has seen Wales play Poland in a three match series. Although they lost the series, Head Coach Zak Jones said the experience was a “hugely positive one, which had readied his team for the challenge ahead.”

Switzerland are ranked four places below Wales and their biggest challenge will be the lack of experience in the squad. Captain Sebastian Schneider is approaching 50 caps for his country but, with 13 teenagers in the squad, this is a team for who each match will present a huge learning curve.

Host nation Croatia and Slovakia are the other two teams contesting this round-robin competition. Croatia are currently ranked 41st in the world, and Slovakia are ranked 50th, but both teams will be determined to use this competition to enhance their global status. Fans can look forward to an energetic display from Slovakian captain Michal Romanec who, with 14 caps, is the most experienced international in the side. Like Switzerland, these are two teams with players who are inexperienced at international level but both Croatia and Slovakia have players who ply their trade at some of the top clubs in Europe, so expect some competitive matches as the players seek to continue their journey towards Tokyo 2020.

The round-robin competition opens with an encounter between Wales and Slovakia. Full a full match schedule, click here.