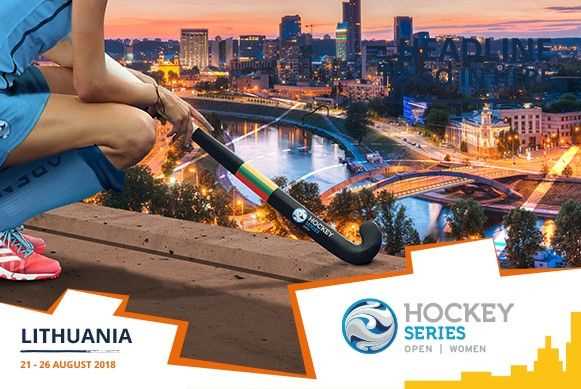 Five teams battle for places in next round of Hockey Series

Vilnius in Lithuania is the next venue all set and raring to go as the Hockey Series continues to excite and inspire hockey people from around the world.

The Vilnius event is a five-nation round robin, taking place from 21 August to 26 August.

It will pit some of the up-and-coming hockey nations from Europe against each other in a fascinating contest to see who qualifies for one of three Hockey Series Finals, taking place next year.

From that event, teams have the chance to compete for Olympic qualification. This really is a chance for a developing nation to go on an exciting international hockey journey.

Three teams will qualify for the next round so competition between the nations will be fierce, with every nation seeing this as a great opportunity to take the next step towards the top level of international hockey competition, as well as the chance to gain ranking points.

As the top ranked team, Czech Republic will be favourites to take top spot at this Hockey Series Open event and the experienced pair of Jindriska Reichlova and captain Tereza Mejzlikova will be looking to lead this exciting team to the next level. There are a number of debutants in the team, including talented teenagers Rozarie Steidlova in goal and Karolina Hanzlova.

Wales have a squad that contains a blend of experience and new talent, with a number of players making their first international appearances for the team. At the other end of the scale, captain Leah Wilkinson is likely to reach 150 caps at this tournament, and the evergreen midfielder will be hoping to celebrate the milestone with a tournament win.

Wales head coach Kevin Johnson said: "After a rigorous training phase in the last two months which have included match series against both South Africa and Poland, we are all looking forward to the challenges that lie ahead in Lithuania. I am particularly pleased to see a number of our younger players step up with the opportunities they have had in this phase and witness how quickly they have connected with both our established player group and the principles of play we are trying to deliver."

Ukraine's national indoor team have tasted high level international competition already in 2018 as the team finished fourth at the Indoor World Cup in Berlin. Many of that team will be playing in Vilnius and they will be keen to reach towards those levels in the outdoor game as well. With the multi-capped (209) Yulia Vorushylo at the helm, Ukraine will pose a threat to those ranked higher, as they have learnt what it takes to win on the big stage.

The final two participants are Turkey and Lithuania. Both these teams are more than capable of causing an upset, and with three qualification spots available, it would only take a good result against a higher ranked team for either side to find themselves catapulted into the big time.

Turkey comes into the tournament as the team with the least experience. Within the squad, only seven players have more than 20 caps, while 13 of the players are under 20, but Head Coach Mustafa Cakir will be looking for his team to play with no fear and high confidence against their more experienced rivals.

The host nation will have the benefit of home support and familiarity, both of which are key components to success. Captain Dovile Kukliene will be marshalling the talents of players such as Dovite Juraite and Viktorija Bogdanova, both of who showed much potential in the junior squads.

Like so many of the players appearing at this event, the Ukraine players are itching to prove themselves ready to play hockey on the international scene.

The Hockey Series Open provides opportunities for the lower ranked or unranked nations to push ahead with their development by giving them the opportunity to take their place on the global hockey stage.

Fans can watch all the action from the Hockey Series Open on FIH Youtube.

For further information about the Hockey Series Open, click here.