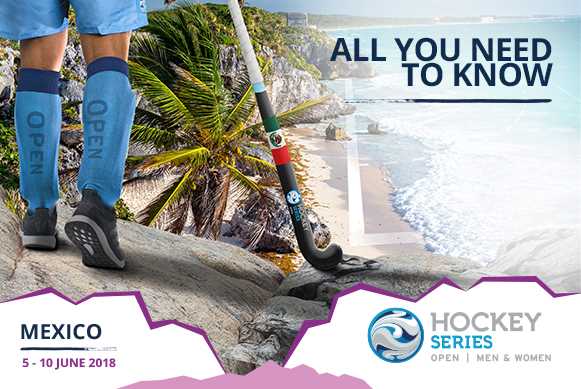 The Mexican events comprise nations from the Pan American continent and will provide a colourful and entertaining curtain-raiser for the new global competition.

There's a lot at stake in Mexico as 15 nations from the Hockey Series Open events will qualify for next year's Hockey Series Finals. Vital FIH Hero World Ranking points will also be on offer which could prove vital in respect of qualification for future events.

A tense men's match between Puerto Rico and Panama will get things started at 10:30 (local time) on 5 June, while the first match in the women’s competition involves the same two teams at 14:30.

Early favourites in the women’s competition are Canada. The top ranked team, standing at 21 in the FIH Hero World Rankings, have made significant progress under experienced international coach Giles Bonnet. His influence appears be showing results with some impressive performances at the Gold Coast 2018 Commonwealth Games where they came up against some of the world's top nations.

Mexico women (WR: 29) are the team likely to push Canada for top spot, particularly given their home advantage. Captain Marlet Correa is an experienced campaigner, as is Michel Navarro and Jesus Castillo in goal. Mexico finished sixth in the 2017 Pan American Cup, but will have gained much knowledge from encounters against Argentina, USA, Chile and Uruguay – all teams with much higher world rankings.

For Guatemala women (WR: 69), entry into the Hockey Series Open is another major step along the way for this rapidly developing hockey nation. Guatemala began to ramp up their hockey activity in 2012 and since then, they have entered their first Central American and Caribbean Games and also participated in the Hockey World League Round One in 2016-17. They are the lowest ranked team in the women’s competition but will be looking to gain invaluable experience on the international stage.

The men’s competition sees the USA leading the way with their FIH Hero World Ranking 26 while at the other end of the scale is Costa Rica who are yet to receive a World Ranking.

Mexico men are ranked 39th in the world and, like the Mexican women’s team, will enjoy home advantage. They finished seventh in the recent Pan American Cup, but there were signs of an emerging talents within the squad. Despite the disparity in rankings, expect Mexico to push the US team hard for top spot.

For many of these teams, the Hockey Series Open offers valuable experience of international competition. For some it also provides an opportunity to make their first step towards Tokyo 2020 qualification. By reaching the Hockey Series Finals, they will give themselves the chance to qualify for the Olympic Qualification Events in 2019.

This event will be streamed live on the FIH YouTube Channel. In addition, more information can be found on the official event website here while FIH will also begin posting on the new Hockey Series Facebook, Twitter and Instagram accounts once the first event begins.

For detailed information about the Hockey Series and Olympic Qualification, visit the Q&A page on the FIH website here.