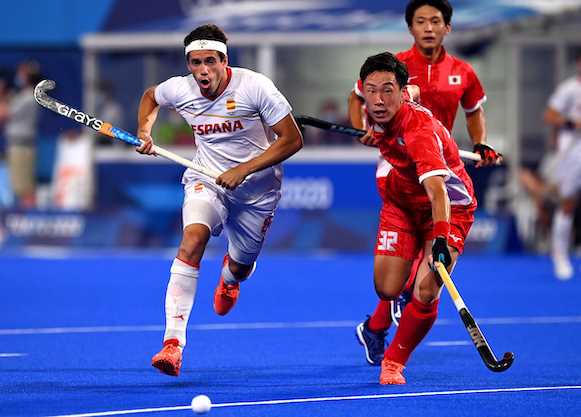 Day 5 (Evening): An Oceania derby match triumph over New Zealand guaranteed Australia a top two finish in Men’s Pool A, while victory for Spain’s men over host nation Japan has boosted their own chances of reaching the quarter-final stages of the Tokyo 2020 Hockey competition. In Women’s Pool B, Australia and Argentina both earned important wins to strengthen their respective positions within the standings.

Japan 0-1 Australia
Australia’s Hockeyroos made it three wins out of three and open up a three-point lead at the top of Pool B, battling to a narrow victory over hosts Japan to all but guarentee a berth in the competition quarter-finals. The result leaves Japan still searching for their first points of the competition, currently three points adrift of the quarter-final qualification places with two rounds of matches remaining.

Japan were arguably the better team in the first two periods, but Australia – who have scored ten and conceded just once in their three matches played so far in Tokyo – had the best chance when a deliberate foul lead to a penalty stroke. However, Kaitlin Nobbs’s flick towards the bottom right corner was blocked by Japan’s impressive goalkeeper Sakiyo Asano, leaving the two teams level at the break. Madison Fitzpatrick scored what proved to be the winning goal three minutes into the third quarter, sending a low penalty corner flick from the left of the circle into the bottom right corner of the Japanese net. Japan rallied hard in the final stages of the match but could not get the break-through that they were so desperately searching for.

"Our focus was that the Japanese were going to come out, without a win yet, and they were just going to come out and throw everything at us”, said Australia’s Edwina Bone. “We were going to be in for a bit of a scrappy fight of a game, which I think it turned out to be. But at the end of the day we still got the result, so I'm pretty proud of how the girls kind of ground it out."

Argentina 3-2 China
An Agustina Gorzelany double helped Las Leonas moved up to third in the Pool B standings as her team claimed a 3-2 win against China, who finished the day just outside those all-important top four qualification positions. Argentina finished the day in third position with two rounds of matches left to play.

Japan 1-4 Spain
Spain gave their hopes of securing a place in the quarter-finals a real boost with a 4-1 win over hosts Japan, a result which moved the Red Sticks – for the time being, at least – into the qualification positions. Japan’s hopes of qualifying look all but over, with the Samurais needing a big win against India in their final pool match to have any chance of progressing.

A poor tackle on the ever-lively Kenta Tanaka saw Japan awarded a penalty stroke within two minutes of the start, with Hirotaka Zendana firing home from the spot. Spain levelled almost immediately thanks to Xavi Lleonart’s penalty corner, with the Red Sticks taking full control in the second quarter courtesy of a brilliant Pau Quemada penalty corner drag-flick and a deflected strike from David Alegre. Japan worked incredibly hard to find a breakthrough, but Spain were in no mood to let the three points slip through their grasp, with Lleonart completing the match scoring with a penalty stroke five minutes from the end of the contest.

Despite the disappointing score-line, it was a day to remember for Japan’s Masaki Ohashi and outstanding goalkeeper Takashi Yoshikawa, with both athletes earning their 100th international caps this evening.

Australia 4-2 New Zealand
The men’s Oceania derby match was won by pool leaders Australia, defeating New Zealand 4-2 to make it four wins from four matches to guarantee a top two finish in Pool A. The Kookaburras are six points clear of second placed India, who have a game in hand over the Australians. Despite defeat, New Zealand remain very much in the hunt for a quarter-final berth.

Australia, who have been in irresistible form here in Tokyo, took the lead in the ninth minute courtesy of a classy field goal from the excellent Tim Brand. It was an advantage that they held for just four minutes, with Kane Russell tying the scores with a penalty corner. The match remained locked at 1-1 throughout the second and third quarters, but three Australian goals in seven fourth quarter minutes changed everything, with Brand, Blake Govers and Wickham sealing the win before New Zealand’s Russell completed the scoring with his second of the match. The match was certainly special for Australia’s Jeremy Hayward and New Zealand goalkeeper Leon Hayward, with the brothers facing each other on the world’s greatest sporting stage at the Olympic Games Tokyo 2020.

Commenting on the situation, Leon Hayward said: “It's ridiculous isn't it? It's a good feeling. It's a strange feeling and I guess everyone's really proud of what's happened but unfortunately I didn't win today so I'm not the happiest guy."


On Thursday (29 July), the morning session will be dominated by action in Men’s Pool B, with South Africa playing Germany, Belgium facing Canada and the Netherlands taking on Great Britain. South Africa and Canada both need wins if they are to keep their quarter-final hopes alive. There is also action in Men’s Pool A, with India facing reigning Olympic champions Argentina.

The evening session will see attention switch to the women’s competition, with three Pool B matches – Spain vs China, Japan vs Argentina and New Zealand vs Australia – in addition to a huge Pool A meeting between Olympic champions Great Britain and World, European and FIH Hockey Pro League title holders the Netherlands in a re-match of the Rio 2016 gold medal game.