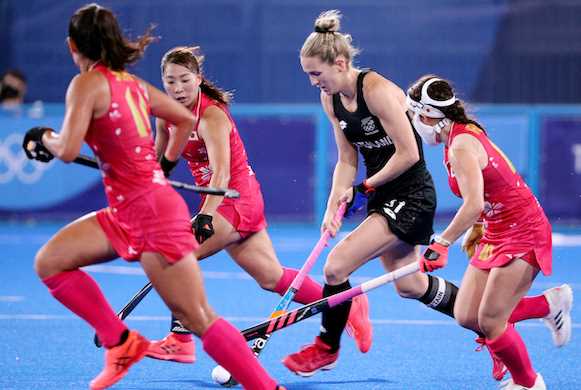 Day 3 (Evening): It was another good day at the Olympic Games Tokyo 2020 for the women of New Zealand and Germany, who both moved level on points with the leaders of their respective pools by claiming second successive wins at the Oi Hockey Stadium. Defending champions Great Britain were also winners, while Argentina kick-started their title challenge with three points.

South Africa 1-4 Great Britain
Rio 2016 Olympic gold medallists Great Britain got their title defence underway with their first three points of the competition, fighting back from a goal down to beat South Africa 4-1. South Africa made an excellent start and took a deserved lead when Nicole Walraven scored from an improvised penalty corner. GB grew in confidence as the game progressed, tying the scores with an Ellie Rayer deflection in the second quarter before Lily Owsley and a rare goal from Laura Unsworth put the title holders in charge. Rayer completed the match scoring with her second goal of the game, racing onto an overhead pass before calmly slotting home with an accurate slap-shot.

“We are absolutely buzzing to get a result out of that game”, said Great Britain’s Fiona Crackles, who at 21 is the youngest member of the squad. “After an amazing performance against Germany, we were unfortunate with the result, we just wanted to come out with the same physical and mental energy. It took us maybe a quarter or two to get into it, but I think we showed there that we can come back from being a goal down.”

Germany 2-0 India
Germany made it a maximum six points from two games courtesy of a 2-0 victory over India. The result moved Die Danas on points with the Netherlands at the top of Pool A, with the Dutch – 4-0 winners against Ireland in the morning session – currently in first place due to a superior goal difference. Germany captain Nike Lorenz put her side ahead with a well taken penalty corner effort in the 12th minute, with Anne Schroder completing the scoring with a 35thminute field goal. Crucially, Germany goalkeeper Julia Sontag saved a penalty stroke when the score was at 1-0.

Speaking about Sontag’s important contribution, Germany’s Lisa Altenburg said: "It was really good. We had many, many good moments in this game. She was our best player I would say."

India head coach Sjoerd Marijne said: "Against these strong sides like Netherlands, like Germany, you don't get five or six opportunities. The ones you get you have to make, that is the stroke for instance. That's the way it is. That's the difference. They get that opportunity and they finish. And that's the difference between the two countries, but we are working hard on that."

Argentina 3-0 Spain
Argentina bounced back from their opening match defeat against New Zealand to claim a 3-0 victory against Spain, although they were certainly made to work for it. The Red Sticks defence proved a tough nut to crack, with Las Leonas having to wait until the 47th minute before finally making a breakthrough when Valentina Raposo scored. Agustina Albertarrio’s cool deflection extended Argentina’s advantage before Noel Barrionuevo completed the match scoring from the penalty spot. Spain captain Maria Lopez made her 200th international appearance in the contest.

Japan 1-2 New Zealand
New Zealand joined Oceania rivals Australia at the top of Pool B thanks to a battling display to overcome hosts Japan, moving onto six points from their two games. All of the goals came in the second quarter of the contest, with Japan taking the lead thanks to Shihori Oikawa’s low penalty corner drag-flick before Olivia Merry made a decisive, match-winning contribution. Merry cracked home a fierce penalty corner strike in the 26th minute before setting up what proved to be the winner, firing across the face of goal for Hope Ralph to score from close range. Japan had numerous chances to pull level, but could not find a way past New Zealand’s superb defensive line.

“I think it is fantastic that we got the three points”, said New Zealand captain Stacey Michelsen. “Obviously coming away with six points from the opening weekend is everything we could have wanted. I think it would have been nice to have been a little bit more clinical tonight; we lacked a bit of energy to the way the girls played yesterday [in the defeat of Argentina], so we’ll certainly look at that.”

Tuesday 27 July is dedicated to the men’s competition, with all 12 competing teams in action. The teams competing in Pool A will be up first, with reigning Olympic champions Argentina taking on pool leaders Australia, India playing Spain and hosts Japan against New Zealand. In Pool B, Germany face Great Britain, Belgium play South Africa and the Netherlands take on Canada.

Make sure that you use #Tokyo2020, #Hockey, #StrongerTogether, #HockeyInvites @Tokyo2020 and @olympicson social media when showing your support for your nation. Be sure to follow FIH for all the latest updates as teams and fans get ready for the biggest show on earth – the Olympic Games.