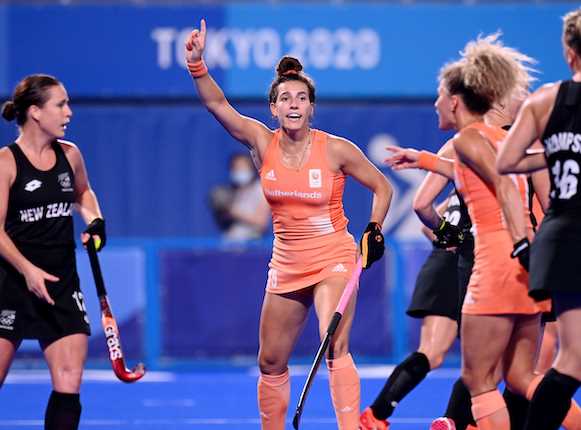 Day 10 (Evening): The semi-final line-up for the women’s Hockey competition of the Olympic Games Tokyo 2020 has been revealed, with the Netherlands and Great Britain joining Argentina and surprise package India in the final four.

The Netherlands – the reigning World, European and FIH Hockey Pro League champions – powered to their sixth win on the bounce in Tokyo with a 3-0 quarter-final victory over New Zealand, with Lidewij Welten, Frederique Matla and Lauren Stam on target as the Oranje confirmed a seventh successive appearance in the medal matches.

The Dutch will face Rio 2016 gold medallists Great Britain in the semi-final, with GB sealing their place with a drama-filled shoot-out victory against Spain. As she did against the Netherlands in that famous final in Rio de Janeiro five years ago, goalkeeper Maddie Hinch produced a sensational goalkeeping performance to save all of Spain’s shoot-out attempts as GB won 2-0.

Earlier in the day, India women produced the performance of their lives to claim a stunning quarter-final victory over Pool B winners Australia, with the team that finished fourth in Pool A now guaranteed their first top four finish at an Olympic Games since Moscow 1980. Gurjit Kaur scored the only goal of the game as India, who finished 12th in the standings at the Rio 2016 Olympic Games, ensured their ambition of medalling in Tokyo was kept alive and kicking.

India’s semi-final opponents will be Argentina, who defeated the much-fancied Germany in the day’s first quarter-final. Goals for Agustina Albertarrio, Victoria Granatto and rising star Valentina Raposo earned Las Leonas a comprehensive 3-0 victory over Die Danas, eliminating the team that finished second in Pool A to march into the semi-finals.

Across both the men’s and women’s Hockey competitions, teams from seven different nations representing four continents have qualified for the semi-finals here at Tokyo 2020 - India (2), Great Britain, Netherlands, Argentina, Australia, Germany and Belgium.

The timings for the women’s semi-finals, which take place on Wednesday 4th August, are as follows. All times are Japan Standard Time (GMT / UTC +9).

More information about this evening’s quarter-finals can be found below.


Netherlands 3-0 New Zealand
Having won all five of their matches in Pool B, the Netherlands started their quarter-final clash with New Zealand in assured fashion, dominating the Black Sticks and scoring goals in each of the first two quarters to firmly take control.

Lidewij Welten got the ball rolling in the seventh minute when she tapped home after fine work down the right from Laurien Leurink, who worked her way along the backline before sending the perfect pass into the path of her onrushing team-mate.

That lead was extended in the second quarter by Frederique Matla’s perfectly placed penalty stroke, which was awarded after Caia van Maasakker’s penalty corner drag-flick hit the body of a New Zealand defender on the goal-line.

The third and final goal for the Netherlands came from the stick of Lauren Stam, sending a penalty corner drag-flick into the goal via the left glove of New Zealand goalkeeper Grace O’Hanlon.

“I’m very happy that we won with the team and got to the semi-finals”, said Netherlands goal-scorer Lauren Stam, who is competing in her first Olympic Games, after the contest. “Of course, it is really nice to score an Olympic goal as well. I have ‘goosebumps’, as you say in English.  I’m excited about everything [here in Tokyo], about the [Athlete’s] Village, the Olympics; I’m very honoured to play here.”

Commenting on the emotions of losing their quarter-final match, New Zealand captain Stacey Michelsen said: "Pretty heart-breaking. We were a little bit disappointed with the way that we came through the pools, and we obviously set ourselves up for a very difficult quarter-final against the world No.1. But we were excited for the game, we put everything out there and we certainly worked hard as a team, but unfortunately it just wasn't enough against a better side today.”


Spain 2-2 Great Britain (0-2 After Shoot-Out)
The quarter-final between Spain and Great Britain was fiercely contested from start to finish, with the Red Sticks proving equals to the reigning champions – 3-1 winners against Spain at the same stage at the Rio 2016 Games – throughout this thrilling, high-octane contest.

The two teams went hard from the very first whistle, showing incredible bravery in the battle to keep their Olympic title hopes on track. It was Great Britain who edged ahead early in the second quarter when Hannah Martin’s quick hands allowed her to move past three Spanish defenders before firing a diving slap-shot between the legs of Spain goalkeeper Maria Ruiz.

Great Britain retook the lead in the third quarter when Grace Balsdon launched a penalty corner drag-flick into the top right corner of the Spanish goal. Spain hit back yet again, with Berta Bonastre showing superb skills to control a high ball before lifting it over the head of the helpless Maddie Hinch to force a shoot-out.

GB’s shot-stopper Hinch was exceptional in the shoot-out, stopping all four Spain’s attempts on goal, with Hannah Martin and Sarah Jones scoring what proved to be decisive goals as the title holders booked their ticket to the semi-finals.


Tuesday 3rd August is men’s semi-final day at the Oi Hockey Stadium, with the four highest ranked teams in the world all fighting it out for the chance to reach the gold medal match. At 10:30 (JST), India men will look to move one step closer to a ninth Olympic title when they take on reigning World and FIH Hockey Pro League champions Belgium. The evening match will be played at 19:00 and will see 2004 Olympic gold medallists taking on four times winners Germany. The two teams met in the semi-final stage of the London 2012 Olympic Games, with the Kookaburras looking to avenge the 4-2 defeat suffered at the hands of eventual champions Germany.

Progression
The quarter-finals, in both the men’s and women’s competitions, were formed as follows.