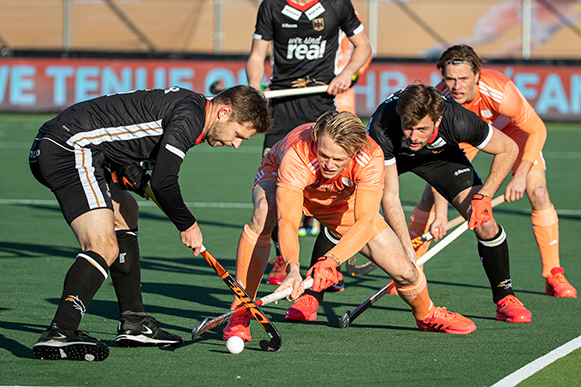 Belgium
About the team: Following their stunning triumph at the Odisha Hockey Men’s World Cup Bhubaneswar 2018, few would dispute that the Red Lions are the hockey success story of the past ten years. In the years leading up to that glorious occasion in India, it had been a case of ‘so near, so far’ for this hugely gifted side. By winning the 2018 World Cup, 2019 European Championships and recently being crowned 2020-21 FIH Hockey Pro League champions, the team coached by New Zealander Shane McLeod are rightly considered as one of the front-runners for gold in Tokyo.
Player perspective – Florent Van Aubel: “Every match is a very important match, and it is how you deal with the pool games. That sets you up for the quarter-final stage. That is something that we have been working a lot on. That format has been around for quite some time, and you need to have your peak performance in the quarter-final and it is based on one game, and that is what is so interesting about that format. You can be very good in the pool stage and finish first, but it is still played on one game. That is where we have tried to train to make sure that we are physically and mentally as fit as possible for that quarter-final.”
One to watch: Arthur Van Doren. A key figure in the Red Lions team that claimed the World and European titles in recent years, defender Arthur Van Doren is a two-time winner of the FIH Player of the Year award a true superstar of the sport.

For more information on Belgium, check out our special interview spotlight feature by clicking here.

Netherlands
About the team: Led by globally respected head coach Max Caldas, the former Argentina international who coached the Netherlands women to Olympic and World Cup glory, the Netherlands are a phenomenally talented team capable of beating anyone on their day. Their sensational run to the final of the Odisha Hockey Men’s World Cup Bhubaneswar 2018 ended in defeat to Belgium, but reconfirmed their status as one of the very best hockey teams on the planet. The Netherlands – who recently became European champions for a sixth time, defeating Germany in a shoot-out in the competition final – reached Tokyo through the 2019 FIH Hockey Olympic Qualifiers, powering to a 6-1 win over Pakistan in Match 2 after the first game in Amstelveen finished 4-4. Tokyo 2020 will be Caldas’s final competition in charge of the Oranje, who is moving on to pastures new by working with the Spanish men’s team.
Player perspective – Jorrit Croon: “I think in our pool and the other pool, all of the opponents are really good teams. Internationally, all the teams are really close and play at such a high level, like we saw at the last Euros. We drew with Germany and Belgium and then drew with Germany again [in the final], so I think that shows how close teams are. I think it will depend on the shape of the day, and maybe if some player will stand up [and perform]. It is all about the details, I think. We are going to try to manage that as good as possible. Of course, the confidence boost of the Euros will help us a lot. But when we are in Tokyo, the Euros won’t count anymore. We will have to prove again that we are in a good way, show a good game and the best of ourselves. I think it will be a really nice Olympics because of how close the teams are.”
One to watch: Billy Bakker. The creative heartbeat of the current Netherlands team, the brilliant Billy Bakker is a player capable of dominating matches from any position he plays. Although he is primarily a midfielder who regularly creates goals thanks to his driving runs into the circle, his tireless running often sees him making crucial defensive interceptions, making him a vital component in the Dutch machine assembled by Max Caldas.

For more information on the Netherlands, check out our special interview spotlight feature by clicking here.

Germany
About the team: The trophy haul achieved by Germany’s men’s team – known as ‘Die Honamas’ – down the years is intimidatingly impressive. Their four Olympic gold medals, two World Cups, eight European Championships and nine Champions Trophy titles provides clear evidence of their consistently excellent performances at the highest levels of international hockey. Having medalled at the previous four Olympic Games competitions (including gold at Beijing 2008 and London 2012), they also have a habit of peaking just at the right time. Germany – silver medallists at June’s EuroHockey Championships in Amstelveen, NED – were comprehensive winners against neighbours Austria in the 2019 FIH Hockey Olympic Qualifiers, winning 5-0 and 5-3 in Mönchengladbach.
Player perspective – Florian Fuchs: “It is a tough pool I guess, but every team is super-fit at the Olympics. Every team is determined to make it to the knock-out stages. I think it is pretty cool that we can play Belgium, the Netherlands and England [Great Britain], all teams that we played at the Euros, again. I think that is nice. [Regarding] being ranked high in the group phase, we were ranked first in 2016 and then we played New Zealand [who finished fourth in their pool]. You might think it is easier to play New Zealand, but it wasn’t that way, and we scored a last second goal [to win].”
One to watch: Christopher Rühr. A central figure in Germany’s Olympic bronze medal winning performance at Rio 2016, Christopher Rühr is a sensational attacker blessed with speed, skill, guile and supreme confidence. Named FIH Rising Star of the Year both in 2013 and 2015.

For more information on Germany, check out our special interview spotlight feature by clicking here.

Great Britain
About the team: It has been 33 years since Great Britain’s men famously claimed the gold medal at the Seoul 1988 Olympic Games. With the Olympic Games Tokyo 2020 on the horizon and Danny Kerry – the man who coach GB’s women to Olympic gold at Rio 2016 – in charge of capable group of players, could another success be just around the corner? GB have produced some fine performances in the FIH Hockey Pro League, and on their day are capable of competing against the very best in the world. GB overcame Malaysia in the 2019 FIH Hockey Olympic Qualifiers, beating the Speedy Tigers 4-1 and 5-2 at the Lee Valley Hockey & Tennis Centre.
Captain’s comment – Adam Dixon: “It goes without saying that we are there to win gold. I think we’d be foolish to downplay ourselves by setting any other goal. I think first and foremost, we have to target getting out of the pool to play those cross-over games. From there, just take each game as it comes. The pool stage is going to be very important for us. I honestly believe the playing field has been slightly flattened with the preparations, covid and everything else that has been going on. There are no certainties. The preparations of some nations will be slightly damaged by the travel restrictions, so I think the playing field is wide open. We are really looking forward to Tokyo.”
One to watch: Zach Wallace. Nominated for the 2019 FIH Rising Star of the Year Award, Zach Wallace is a wonderfully gifted, energetic and versatile player who looks to have a long international future ahead of him.

For more information on Great Britain, check out our special interview spotlight feature by clicking here.

Canada
About the team: Canada will make their eighth Olympic appearance in the same city they made their first, with the Red Caribou debuting at the Tokyo 1964 Games. The team have long been one of the giants of Pan American hockey, becoming continental champions on no less than five occasions. They have yet to achieve an Olympic finish higher than tenth, but will be aiming to change that in Tokyo, having qualified by battling past Ireland in the 2019 FIH Hockey Olympic Qualifiers.
Captain’s comment – Scott Tupper: “Our best placement at an Olympic Games is tenth position, so if we can get into a quarter-final it would be the best performance by the Canadian men’s team ever, and we would love to do that. But I do really think it is one game at a time, and not letting say a tough match at the start of the tournament roll into the next game. Ultimately, it is possible that you could get through with two good results. We’d love to have more than two, but we really need to make sure that whether the previous game has gone well or not so well, we put it to bed and have a good game plan ready to go in order to be ready to seize any opportunity that might present itself.”
One to watch: Scott Tupper. Canada’s captain and talisman is a rock-solid defender who leads by example. Committed in the tackle and blessed with great vision, Tupper has a habit of controlling games from the back line and also getting on the scoresheet with crucial goals.

For more information on Canada, check out our special interview spotlight feature by clicking here.

South Africa
About the team: South Africa sealed their ticket to Tokyo by becoming African continental champions in 2019, with veteran defender Austin Smith playing a huge role in the success by finishing as competition top scorer with ten goals in five matches. The team has long been the dominant force in African hockey and will be determined to make a big impression in Tokyo. There have been two late athlete replacements for the South Africa team, with Daniel Bell and Rusten Abrahams replacing Clinton Panther and Mohamed Mea. To see the updated South Africa team list, click here.

Coach Quote – Garreth Ewing: “It’s definitely been an interesting 12 months. I think we have taken the positive in growing in maturity and culture over the past year. It is a great opportunity to make an improvement in the world rankings, but that is something we want to do over a sustainable period. I am very pleased with the squad we have put together. It was a difficult process, but I am certain we have the team that can go to games and meet our objectives.”

One to watch: Tim Drummond. South Africa’s captain is an influential midfielder who has plied his trade arguably the toughest club league in the world, representing Klein Zwitzerland and SCHC in the Dutch Hoofdklasse. Tokyo 2020 will be his second Olympics, having also been part of the squad that competed at the London 2012 Games.

For more information on South Africa, check out our special interview spotlight feature by clicking here.