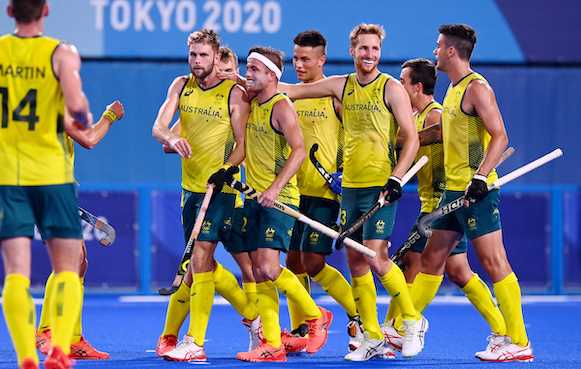 Tokyo 2020: Kookaburras lay down marker with crushing win over India

Day 2 (Evening): A magnificent attacking display from Australia’s Kookaburras was the highlight of a remarkable evening session at the Oi Hockey Stadium, with Argentina, Spain and Netherlands also claiming important wins as the search for a place in the competition quarter-finals continued.

More information can be found below.

India 1-7 Australia
Australia’s Kookaburras produced a devastating display of attacking hockey to overwhelm India 7-1 and put themselves two points clear at the top of Pool A after two rounds of matches. The early exchanges were relatively even, but everything changed when Daniel Beale netted in the 10th minute. Strikes from Jeremy Hayward, Flynn Ogilvie and Joshua Beltz established a 4-0 lead at half time as Australia hit top gear. India made a strong start to the second half and pulled a goal back through Dilpreet Singh, but a Blake Govers double killed off any hope of a fightback before Tim Brand completed the scoring with a stylish finish nine minutes from time.

"When you score seven goals you’ve got to be pretty happy with it”, said Australia’s Beale. “I think we’re just more happy with putting four quarters together. Yesterday [against Japan] we had a second-quarter lapse, so today to get ahead and then I think we made a pretty good save on the line at 1-0 up, and then from that momentum we can put seven on which you’re never going to be unhappy with.”

India captain Manpreet Singh said: "It’s a really good team, Australia is No.1 in the world. We expected that from this team, but we need to work on our man-marking behind because it was too easy for them to score a goal."

Japan 1-2 Argentina
Reigning Olympic champions Argentina remain unbeaten in Pool B, having added three points from today’s 2-1 win over hosts Japan to the one they claimed against Spain on Saturday. Los Leones ended the day sitting second in the pool after their triumph over the Samurais. Argentina took the lead in the fifth minute through Jose Tolini’s penalty corner before Nicolas Keenan doubled the advantage in the second quarter. Japan put the Rio 2016 gold medallists under serious pressure at times, but Kenta Tanaka’s excellent 60th minute field goal came too late to change the outcome of this contest.

"I was able to show my heart that I will not give up even if it was the end of the game”, said Tanaka. “However, we needed to score the goal a little earlier."

Spain 3-4 New Zealand
New Zealand moved up to third in the Pool A standings thanks to victory over Spain, fighting back from 3-2 down in the final quarter to win a pulsating fixture 4-3. The Black Sticks twice held the lead in the early stages, with Stephen Jenness and Blair Tarrant goals being cancelled out by Enrique Gonzales and Pau Quemada. Marc Bolto put the Red Sticks in the lead late in the third quarter, but Kane Russell’s penalty corner and a poacher’s goal from Jake Smith earned a fine three points for the New Zealanders. Spain’s Ricardo Sanchez made his 100th appearance for his country in the contest.

When asked how he felt about his team winning the match late on, Kane Russell said:  "Pretty ecstatic. It was a funny game. There was a lot of swings and momentum. New Zealand and Spain are always tough games so it’s a big relief.”

South Africa 3-5 Netherlands
European champions the Netherlands avoided what could have been the shock result of the tournament against South Africa, fighting back from 3-0 down to beat the African champions 5-3 in an absorbing Pool B encounter. The fired-up South Africans opened up a sensational 3-0 lead inside 18 minutes, with Dayaan Cassiam, Mustaphaa Cassiam and Tevan Kok all netting brilliantly against the bewildered Dutchmen. A backhand rocket from Mirco Pruijser and a poacher’s goal from Thijs van Dam give the Dutch hope ahead of half time, with Thierry Brinkman levelling matters six minutes after the break. Goals from Mink van der Weerden and a second for Pruijser, brilliantly assisted by Brinkman, sealed all three points for the Netherlands, who finish the day sitting fourth in the pool.

The Tokyo 2020 Hockey action continues on Monday 26 July with a further eight matches; two in the men’s competition and six in the women’s tournament. In men’s Pool B, European heavyweights Germany and Belgium take to the field before Great Britain go head-to-head with Canada. In Women’s Pool A the Netherlands face Ireland in a re-match of the 2018 FIH Women's World Cup final, while South Africa face Great Britain and Germany meet India. In Women’s Pool B, Australia play China, Japan take on New Zealand and Argentina face Spain.