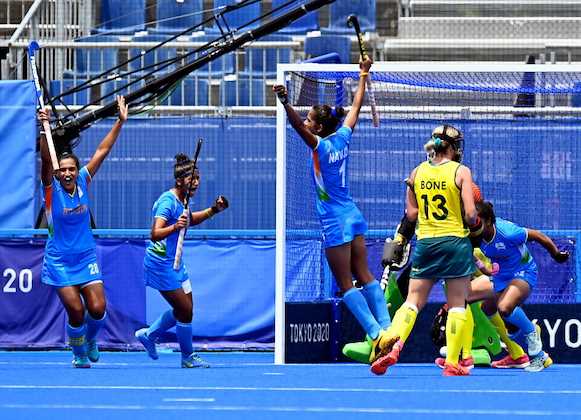 Day 10 (Morning): India women produced the performance of their lives to claim a stunning quarter-final victory over Pool B winners Australia, with the team that finished fourth in Pool A to be guarenteed a first top four finish at an Olympic Games since Moscow 1980.

Gurjit Kaur scored the only goal of the game as India, who finished 12th in the standings at the Rio 2016 Olympic Games, ensured their ambition of medalling in Tokyo was kept alive and kicking.

India’s opponents in the semi-finals will be Argentina, who defeated the much-fancied Germany in the day’s first quarter-final. Goals for Agustina Albertarrio, Victoria Granatto and rising star Valentina Raposo earned Las Leonas a comprehensive 3-0 victory over the much-fancied Germany, eliminating the team that finished second in Pool A to march into the semi-finals.

It is the fifth time that Argentina’s women have reached the final four of the Olympic Games, having medalled on each of the four previous occasions (silver – Sydney 2000, London 2012; bronze – Athens 2004, Beijing 2008).

The two remaining women’s quarter-finals – the Netherlands versus New Zealand and Spain versus Great Britain – will take place this evening. The women’s semi-finals will take place on Wednesday 4th August.

More information about this morning’s quarter-finals can be found below.

Germany 0-3 Argentina
Argentina were worthy winners of their quarter-final against Germany, with the team that finished 3rd in Pool B claiming their place in the semi-finals by defeating the 2nd ranked team from Pool A.

Las Leonas produced arguably their best performance of the competition to overpower Die Danas, a team many saw as potential medallists here in Tokyo thanks to a European silver medal and four wins out of five in their pool.

The giants of Pan American hockey were largely dominant in the first two quarters but excellent defending from Germany kept them at bay until the final three minutes of the second period, with Agustina Albertarrio’s close range tip-in and Victoria Granatto’s angled penalty corner deflection establishing a 2-0 lead.

Germany gave everything they had to get back into the contest but goal-scoring chances came and went before Argentina put the result beyond all doubt with eight minutes of the match remaining. The goal came from the stick of 18-year-old defender Valentina Raposo – one of the breakout stars of Tokyo 2020 – who smashed a blistering penalty corner strike against the Germany backboard.

"I can't believe it”, said Argentina’s Victoria Granatto, referring to scoring in an Olympic quarter-final. “Every player who scores it's a great moment for us and today was for me. But I think we did a very, very good game and all the team needs to be happy for this because we fight till the end."

Germany’s Franzisca Hauke, who announced her international retirement, said: “We are so disappointed. We had the goal to win a medal in Tokyo and it didn't work out.  We haven't been at our best today and that's what makes us really sad because we could do better. And if you do your best game and you lose, it's not that disappointing like it is now.”


Australia 0-1 India
India’s women are now certain to at least match their highest ever finish at an Olympic Games after recording the biggest shock of the competition to beat the Hockeyroos of Australia. A fourth-place finish at Moscow 1980 was India’s previous best, although they have good reason to set their sights even higher this time around.

India, who lost their first three matches of the competition and finished fourth in Pool A, matched runaway Pool B winners Australia throughout the first two quarters, and came closest to breaking the deadlock when Rani’s angled deflection rattled the right post as lively Indian attackers caused real problems for the Hockeyroos’ defence.

Australia certainly had their chances, with India goalkeeper Savita being tested numerous times before the Asians snatched a shock lead when Gurjit Kaur’s penalty corner drag-flick somehow found its way into the bottom right corner.

The Hockeyroos threw everything they had at India in the latter stages, winning numerous penalty corner opportunities. However, India – with goalkeeper Savita in truly inspired form – stopped the three times Olympic gold medallists from getting the goal they so desperately needed, with India’s women matching the achievement of their men’s team by reaching the final four for the first time in over 40 years.

“I don't know what to say because emotions are too high at the moment, and we all are very happy because it was not an easy game to win from Australia", said elated India captain Rani. "But I'm super proud of my team; each one of them really worked so hard throughout the game. And we just said one thing to each other, 'Just believe in ourselves, we can do this well.'”

Hockeyroos captain Edwina Bone said: "There's all sorts of emotions that are going on. Disappointment, but I'm still really proud of the way that we played today.  We came in with lots of momentum, we created lots of opportunities and unfortunately that's how sport goes sometimes. It can be cruel and today just wasn't our day unfortunately."