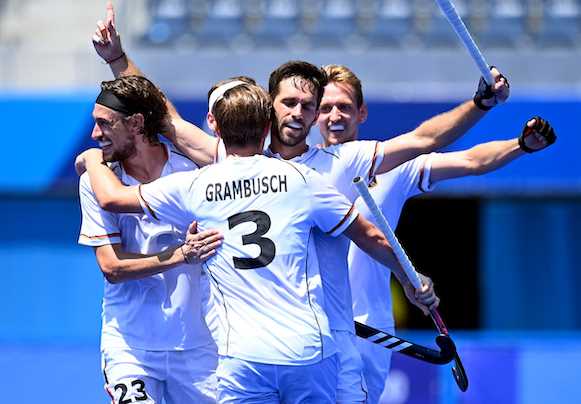 Day 9 (Morning): Germany and Australia will meet in the semi-finals of the men’s Hockey competition at the Olympic Games Tokyo 2020 after winning their respective quarter-finals on a thrilling morning at the Oi Hockey Stadium.

Pool B runners up Germany booked their fifth successive Olympic semi-final appearance with a fine win over Rio 2016 gold medallists Argentina, with exquisite penalty corner goals from Lukas Windfeder (2) and Timm Herzbruch proving to be enough as Die Honamas continue their quest for a fifth Olympic title in men’s hockey.

Germany’s opponents in the semi-finals – which will be played on Tuesday 3rd August (time TBC) – will be Pool A winners Australia, who were pushed all the way by the Netherlands, who finished fourth in Pool B, before winning a shoot-out in a dramatic second semi-final.

The two remaining men’s quarter-finals – Belgium versus Spain and India versus Great Britain – will take place this evening. More information about this morning’s semi-finals can be found below.

Germany 3-1 Argentina
Argentina’s hopes of defending the Olympic title that they so brilliantly won at Rio 2016 was ended thanks to a clinical performance from Germany, who moved into the semis and continue their hunt for a 12th men's hockey medal in Olympic competition.

Die Honamas scored three times from just four penalty corner opportunities, an intimidating conversion rate that will not go unnoticed by the respective coaches of the other teams that reach the final four.

Germany’s first penalty corner chance resulted in a re-award, with Lukas Windfeder making no mistake with his team’s second chance by rattling the backboard of the Argentina goal in the 19th minute.

The Rio 2016 bronze medallists extended their advantage in the third quarter when Timm Herzbruch deflected home a exceptionally worked routine, with a precise exchange of passes leaving Argentina’s defenders utterly bewildered and goalkeeper Juan Vivaldi – who made some incredible saves in this contest – no chance of saving.

Windfeder took the score to 3-0 with another ripping drag-flick twelve minutes from time before Argentina pulled a goal back thanks to Maico Casella’s penalty corner drag-flick. It proved to be only a consolation, with Germany deservedly taking a victory to book their quarter-final ticket.

"It was a really, really tough match today”, said Germany goal-scorer Timm Herzbruch. “The Argentinian team is a really aggressive and emotional team in the defence, and we played very good in our structure. In the end, it's a 3-1 (win) and we're very happy to play in the semis."

Argentina goalkeeper Juan Vivaldi, 42, confirmed he was bringing down the curtain on his illustrious career, stating: “It was very emotional, my last game. I want to enjoy all of this. I have played a lot of years, matches and games so this is a moment to look back and enjoy all that.”

Australia 2-2 Netherlands (3-0 After Shoot-Out
Despite this being a meeting between the winner of Pool A and the team that finished fourth in Pool B, the undefeated Kookaburras were given a huge test by the Netherlands, who produced their best performance of the competition by far to push the Oceania giants all the way.

Australia took the lead when Tom Wickham forced home a close-range field goal after excellent work from Tim Brand, scoring 13 minutes into a first half in which the Netherlands had the most scoring opportunities but were thwarted by the brilliance of Kookaburras goalkeeper Andrew Charter.

The Oranje snatched a deserved equaliser early in the third period when Mink van der Weerden found a gap between Charter’s legs from a penalty corner. However, the Australians were soon back in front, with outstanding Brand and Wickham combining again for the latter to slap-shot into the Netherlands goal via the right post.

The Dutch again hit back thanks to a perfectly placed penalty stroke from Jeroen Hertzberger ten minutes from time after Mirco Pruijser’s goal-bound shot hit the body of an Australian defender, setting up a shoot-out for a place in the semi-finals.

It was the Australians who would emerge triumphant in the one-on-ones, with Charter producing goalkeeping heroics to deny Hertzberger, Robbert Kemperman and Jonas de Geus before rising superstar Brand sealed victory following converted efforts from Blake Govers and Flynn Ogilvie. It was a moment of redemption for Australia, who suffered a shoot-out defeat against the Netherlands in thre semi-finals of the Odisha Hockey Men's World Cup 2018.

"It feels absolutely amazing", said 22-year-old Brand, who was born in the Netherlands but moved to Australia with his family when he was three years old. "To reach the semi-finals of an Olympics is always special. I don't think it was our best game. We had to grind out that one. We've been practising shoot-outs for a long time, after the World Cup three years ago, so to get a win there was really good."

Kookaburras goalkeeper Andrew Charter was also thrilled with the team's victory. "It was amazing. We had a bit of disappointment at the World Cup a couple of years ago against Holland and to come out here and put on a performance, not our best, but we managed to get into the shoot-out and to win it is just euphoria. We've got to come back now and put it together in the semi."

The evening semi-finals matches at the Oi Hockey Stadium features Pool B winners Belgium, the reigning world champions, up against Spain, who finished fourth in Pool A, at 18:30 (JST). The last match of the day sees Pool A runners up India – the eight times Olympic gold medallists – taking on Great Britain, who finished 3rd in Pool B, at 21:00. The winner of the Belgium vs Spain match will face either India or Great Britain in the competition semi-finals.