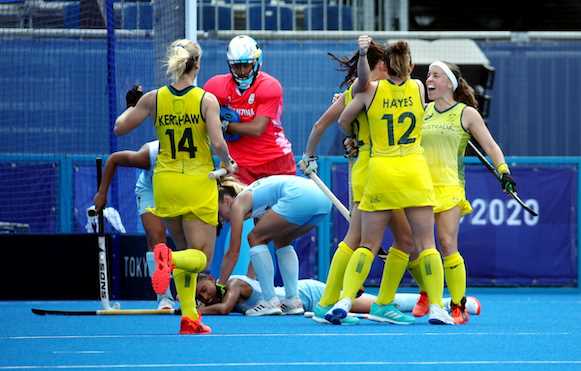 Tokyo 2020: Five out of five for Hockeyroos as Pool B closes out

Day 8 (Morning): Australia completed their Pool B campaign with a perfect record of five wins from five matches, beating Argentina 2-0 to set in stone their status as pool winners.

Remarkably, it is the first time that the Hockeyroos, who are triple Olympic gold medallists, have finished the pool phase at an Olympic Games with a 100% win record.

A 2-0 defeat proved costly for Las Leonas, who finished third in Pool B behind Spain – 4-1 winners against Japan earlier in the day – on goal difference.

Despite losing against China, New Zealand finished fourth in Pool B and will take their place in the quarter-finals.

In Pool A, India were pushed all the way by South Africa before taking a 4-3 win, moving them ahead of Ireland and into the top four ahead of the Green Army’s must-win clash against reigning Olympic champions Great Britain this evening.

More information about the matches can be found below, with the women’s competition quarter-final line-up being revealed following the conclusion of the evening session here at the Oi Hockey Stadium.

China 3-2 New Zealand
China came into their match against New Zealand knowing that they needed a big win against the Black Sticks to have any chance of reaching the quarter-finals, but their 3-2 success was not enough for a top four finish. Despite defeat, New Zealand’s qualification for the knock-out stages was confirmed, although they had to wait for the outcome of Spain’s match against Japan before knowing their final placement in Pool B.

China were arguably the better team in the first quarter before a yellow card five minute suspension for Liang Meiyu swung the contest in the Black Sticks’ favour, with Ella Gunson scoring a penalty corner tap-in just ahead of the quarter time break. Liu Meng restored parity when she slapped home a second quarter penalty corner before Chen Yang put China ahead mid-way through the third quarter. A fierce forehand drive from Rose Keddell tied the scores at the end of the period, but Liang Meiyu’s 54th minute winner ensured that the points – but not the ticket to the quarter-finals – went to China.

New Zealand’s Katie Doar said: "China played really well. At critical times we didn't really do the right things, so I guess we're just gonna have to reflect tonight. We've got a rest day tomorrow, so we'll definitely learn from that to come out better in our quarter-final.”

It was a milestone game for China’s Wang Na, who made her 100th senior international appearance.

Japan 1-4 Spain
Spain knew that a point against Japan would be enough to book their place in the competition quarter-finals, but a comfortable victory over the Cherry Blossoms guaranteed them at Pool B finish of at least third before the result of the Argentina vs Australia match was known. It was a sad ending for the players and coaching staff representing the host nation, who finished sixth in the pool.

Japan took a sixth minute lead when Kanon Mori scored from open play, an advantage that they held until mid-way through the second quarter when Laura Barrios ensured that the teams went into half time with the scores level. The Red Sticks kicked on after the break, with Begona Garcia and Candela Mejias on target before Berta Bonastre fired into an empty net three minutes from the end.

It was a brilliant win for Spain head coach Adrian Lock, who returned to the sidelines today after being in Covid-19 quarantine since the start of the tournament.

“We are so happy to have him back, it gives us a big plus on the pitch”, said Spain’s Maria Lopez after the match. “He came back this morning at 5am. We are so lucky to have him as our coach. It was extra motivation for us.”

Commenting on her team’s third successive win, Lopez said: ““I think we are ready. We have been improving in each game, and [here] we scored four goals. It gives us a lot of confidence going into the next game.”

Argentina 0-2 Australia
Australia’s Hockeyroos continued their magnificent Tokyo form by completing the pool phase with a perfect five wins out of five, beating Argentina 2-0 to confirm their status as Pool B winners, with Las Leonas finishing third in the standings due to Spain’s marginally better goal-difference.

There was little to choose between the two teams throughout the contest, although Argentina perhaps had the better of the early scoring chances with Delfina Merino and Agustina Gorzelany both going close. However, Australia’s magnificent defence, which has conceded just once in five matches here in Tokyo, proved to be almost impenetrable. The deadlock was eventually broken by Savannah Fitzpatrick, who stole possession from Argentina’s hugely impressive teenage defender Valentina Raposo before powering a backhand strike against the backboard. The win was confirmed a minute from the end when Emily Chalker bundled home from close range, finishing off a fine attacking move down the right.

Commenting on winning five from five pool matches and finishing on top of Pool B, Jane Claxton said: "It's pretty special. I think it's a new record for (Australian) women's hockey (to win all five pool matches) which obviously you can't not acknowledge. It's not every day that you win five out of five at an Olympic Games. But unfortunately, this is now the business end and that won't count if we go into a quarter-final and aren't successful."

Argentina’s Agustina Gorzelany said: "No one wants to lose and we are angry about this result. We were trying some changes and I think this was the game to try them. These things do happen but from now on we know where we need to get better so we are now focusing on the quarterfinals and getting ready for that."

India 4-3 South Africa
Three goals from Vandana Katariya helped India complete their Pool A campaign with an important win over South Africa, a result which keeps alive their dream of qualifying for the competition quarter-finals. The result puts India into fourth place in the pool, but will have to wait until the end of today’s play before knowing if it is enough to progress, with fifth placed Ireland needing to defeat Olympic champions Great Britain to snatch quarter-final qualification away from the Indians.

It was far from straight-forward for the India, who faced a South Africa team utterly determined to end their own competition on a high. Katariya’s fourth minute opener was cancelled out by South Africa’s Tarryn Glasby on the stroke of quarter time, with Katariya restoring India’s lead shortly after the re-start. Erin Hunter restored parity seconds before half time, but again India hit back when Neha established a 3-2 lead. Marizen Marais made the score 3-3 in the latter stages of the third quarter, putting real pressure on India’s hopes of claiming a crucial three points. However, the Indian victory was sealed 11 minutes from the end when Katariya completed her hat-trick.


The action continues later today with the final two matches in Women’s Pool A, with Germany and the Netherlands going head-to-head to determine which nation will finish top of the standings. That match is followed by the Ireland versus Great Britain clash, with Ireland needing to defeat the reigning Olympic champions in order to leap-frog India into the fourth quarter-final qualification position.