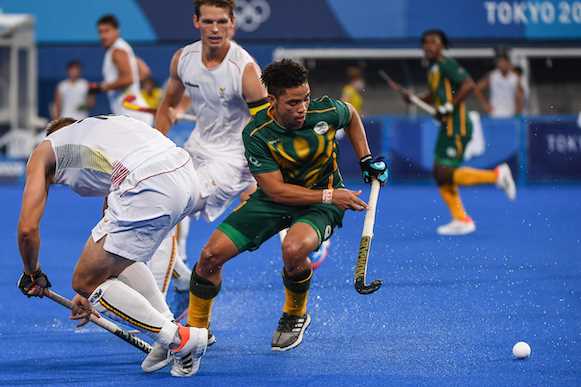 Day 4 (Evening): A third win in succession has ensured that World champions Belgium finished the day three points clear at the top of Pool B, with Germany (2nd), Netherlands (3rd) and Great Britain (4th) tied on six points but separated by goal difference as the quest for the quarter-final berths continued. South Africa and Canada, who both produced excellent displays this evening, are in fifth and sixth respectively with two rounds of matches left to play.

Belgium 9-4 South Africa
Belgium men consolidated their place at the top of the Pool B standings with a big victory against South Africa, but the score-line did not reflect the true nature of a fascinating encounter between the World champions and a South Africa team that is clearly growing in stature with every game.

John-John Dohmen’s opening goal was cancelled out by a sensational individual strike from Dayaan Cassiem, who covered half the length of the field in possession before flicking over the shoulder of goalkeeper Vincent Vanasch. Belgium’s response was swift and brutally effective, opening up a 5-1 lead with Hendrickx, Briels, Dohmen again and Arthur Van Doren – who made his 200th international appearance – all on target before the quarter finished. 5-1 became 7-3 by half time as the two nations traded blows, Hendrickx and Gougnard on target for the Belgians while 19-year-old Mustaphaa Cassiem (Dayaan’s younger brother) and Nqobile Ntule netted for South Africa. The African continental champions rattled the Pool B leaders further when the brilliant Dayaan Cassiem netted his second of the game before competition top scorer Hendrickx, completing his second hat-trick of the tournament, and Cedric Charlier finished the scoring.

Commenting on the South African team, Belgium ace Arthur Van Doren said: “They've got some speed on them and real skill. You've got to respect the quality they've brought and been bringing in the whole tournament. I'm looking forward to seeing how they progress in this tournament and the coming years because they'll probably make some extra steps as well."

Netherlands 4-2 Canada
The Netherlands moved level on six points with Germany and Great Britain with a 4-2 win against Canada, but were certainly made to work hard for the spoils thanks to a tireless performance from the North Americans.

The Netherlands made an electrifying start to the contest, powering into a 2-0 lead within four minutes thanks to backhand strikes from Billy Bakker and Thierry Brinkman. It was a tough opening spell for the Canadians, but they soon settled and began to create problems for the Dutch defenders. Ten minutes in, the Canadians pulled a goal back when James Wallace pounced from close range after the Netherlands failed to clear their lines. Whilst Canada’s attackers battled hard in an attempt to find an equaliser, they were indebted to goalkeeper Antoni Kindler and his fellow defenders who made numerous crucial interceptions. Canadian hopes were dashed when defender Jop de Mol powered into the circle and slapped home with ten minutes remaining, but Mark Pearson pulled his team back to within one goal three minutes later with a penalty corner deflection.

Canada went for broke in the final minutes by replacing goalkeeper Kindler with an outfield player, but the Dutch put the result beyond all doubt when Mirco Pruijser passed into an empty net from a break-away move.

"We did a good job today", said Netherlands captain Billy Bakker.  "The previous two matches were not the games how we wanted to play. Today we started from the first minute very aggressively, with a lot of energy and that's the standard we need to have. I'm glad that we made a big step forward to growing into the tournament."

Canada goalscorer James Wallace said: "We're playing really well. I think we're just missing that final five (or) 10% that's gonna help us get results against teams like GB, teams like the Dutch and it's a bit disappointing, a bit heartbreaking at times."

Day 5 of the Olympic Games Tokyo 2020 Hockey competition will feature eight matches, six of which will be in the women’s competition. In Pool A, table-toppers the Netherlands take on fifth-placed South Africa, with Great Britain facing India and Germany playing Ireland. The Pool B matches see New Zealand doing battle with Spain, Japan in action against Australia and Argentina locking horns with China. There are also two matches in Men’s Pool A, with Japan and Spain going head-to-head before the Oceania derby match between league leaders Australia and New Zealand.