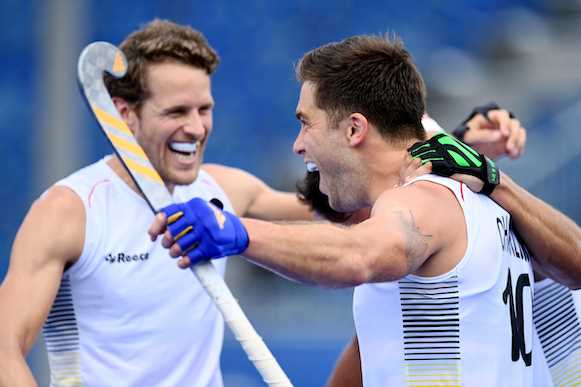 Day 3 (Morning): Belgium and Great Britain ended the morning session joint top of men’s Pool B after both recorded second successive victories at the Oi Hockey Stadium. In the women’s competition, the Netherlands and Australia continued their excellent starts to the competition with wins.

Germany 1-3 Belgium
Cedric Charlier hit a double as reigning World and FIH Hockey Pro League maintained their 100% winning start with a 3-1 victory over European rivals Germany. Charlier’s fifth minute opener was fortunate, with a speculative cross-shot being diverted into the goal via a Germany stick. However, there was nothing lucky about the second goal, with the Red Lions attacker smashing a ferocious strike from the top of the circle under the crossbar just two minutes after his first. Belgian penalty corner ace Alexander Hendrickx made it 3-0 five minutes after half time, with Germany’s Martin Haner netting a consolation goal from a penalty corner nine minutes from time.

“I think we can be really happy with the performance”, said Belgium’s Simon Gougnard. “We’ve had two good first games in the pool, which puts us in a good position and I’m looking forward to the next game [against South Africa on Tuesday] already. We still have some stuff to improve, so we’ll keep our feet on the ground as we haven’t done anything yet, but it is a really good start.”

Germany captain Tobias Hauke said: "We didn't start well. The first quarter we weren't aggressive enough and then we needed some time to get into the game. The second half was quite good and at the end, we did have enough ball possessions in the circle of Belgium but just one goal and three corners is not enough against this team.”

Great Britain 3-1 Canada
Great Britain moved level on points with Belgium by claiming their second win on the bounce, beating Canada 3-1. Great Britain dominated for long periods, twice hitting the frame of the goal but failing to convert in either of the opening two quarters. The breakthrough came three minutes after half time when Liam Ansell fired home an ingenious pass from Sam Ward, who himself doubled the advantage eight minutes later with a perfectly executed penalty corner drag-flick. Floris van Son’s superb backhand strike in the fourth quarter made things interesting, but Ansell tapped home from close range to kill off any danger of a Canadian comeback.

“I’m obviously really happy”, said Great Britain captain Adam Dixon. “Another three points, six points in total so far, so in some ways it is the perfect start. I think we are still finding our way into the tournament, which is the same for lots of teams, having not played lots of international hockey in the last few weeks. I keep saying the same message: it’s about building momentum. We’ve got the European leg of the pool stage now, so three pretty big games [against Germany, Netherlands and Belgium] coming up, which we are going to have to be ready for.”

There was a milestone moment for Polish umpire Marcin Grochal, who took charge of his 100th international to earn his Golden Whistle.

Netherlands 4-0 Ireland
World, European and FIH Hockey Pro League champions the Netherlands produced a dominant display to record a 4-0 victory over Ireland, making it two wins from their first two matches in Women’s Pool A. Marloes Keetels put the Dutch ahead in the eighth minute, but a brilliant goalkeeping performance from Ireland’s Ayeisha McFerran kept the Oranje out for the next 41 minutes. Eventually though, the pressure told, with Malou Pheninckx, Laurien Leurink and Frederique Matla all on target as the competition favourites strengthened their position at the top of the pool.

"I'm just so proud”, said Netherlands captain Eva de Goede, commenting on the performance of her team. “I think when you get into the team as a youngster you just don't know what to expect and you just play. Now, looking at the girls who are younger and really fitting into the team nicely, I think the level of playing and level is passing is so high. I really love that we can play like that because I really do think that that's one of our strengths and we can really outplay another team."

Ireland goalkeeper Ayeisha McFerran said: "Unfortunately today just wasn't quite our day. We dug in well and I'm really proud of the defensive effort everyone put in. It was a team effort out there but that's the Dutch for you. They're just quite good, aren't they? There's several things we have to take and learn from it. We can't just brush it under the carpet, but we have to move on."

It was a milestone game for Ireland captain Katie Mullan, who played her 200th senior international match.

Australia 6-0 China
The Hockeyroos made it two wins by comprehensively thrashing China, with the team coached by double Olympic gold medallist Katrina Powell netting six times from open play in a 6-0 win. Emily Chalker scored twice in the second quarter before Brooke Peris slotted home just after half time. Three goals arrived in just four fourth quarter minutes as Rosie Malone, Steph Kershaw and Grace Stewart completed the scoring to put the Australians both top of the standings and firmly on course for a place in the competition quarter-finals.

It was a milestone game for China captain Peng Yang, who played her 200th senior international match.

The evening matches at the Oi Hockey Stadium all take place in the women’s competition. In Pool A, South Africa take on Great Britain while Germany face India. The Pool B matches feature hosts Japan playing New Zealand while Argentina and Spain go head-to-head.