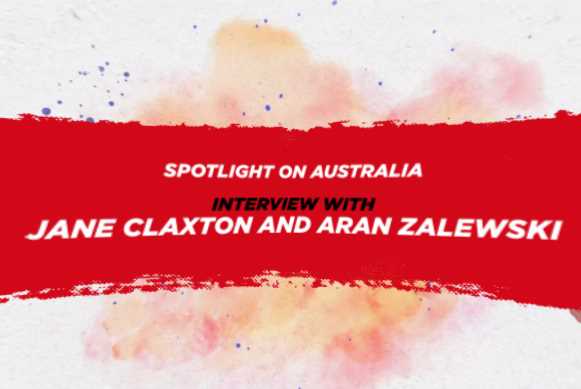 In the latest of our Olympic Spotlight series, we focus on the men’s and women’s teams of Australia, two sides that will very much fancy their chances of achieving glory at the Olympic Games Tokyo 2020. Jane Claxton and Aran Zalewski, both long time servants of the Australian national teams who will be in the heart of the action in Tokyo, tell us about how the preparations are going in their respective quests for gold. The interview was recorded in May, before the Australia’s Olympic squads were finalised.

Jane Claxton, Aran Zalewski, thank you so much for talking to us about the upcoming Olympic Games Tokyo 2020.  With everything that has happened over the past 18 months and covid delaying the Games by one year, are you excited about the prospect of competing at Tokyo 2020? We’ll start with you, Jane. How is the mood in the Hockeyroos camp?
Jane Claxton: “As you said, I guess it has been a year of contemplation and hope that it would go ahead, so to get confirmation earlier this year that we are actually going to an Olympic Games, fulfilling a lot of childhood dreams, I think the group by and large are just very excited.”

And you, Aran – how are Kookaburras feeling about the that it is getting so close.
Aran Zalewski: “I certainly echo Jane’s words. For us, this year has been a fair bit easier, as we’ve been able to narrow our focus towards Tokyo. Last year there was a lot more uncertainty about what we might be doing and how the schedule looked in terms of the amount of matches we might play in the build-up to the Olympics. That has still been difficult, being here in Australia, due to the amount of isolation we have and our strict boarder requirements. For us, to narrow our focus, and how close the Olympics are now, it certainly feels much more real for me and a lot of the guys.”

To represent your country at the Olympic Games, arguably the world’s biggest sporting stage, must mean a great deal both of you. Aran, I appreciate the results didn’t go the Kookaburras’ way at Rio 2016, but it still must have been an incredibly proud moment to step out for your first match at an Olympic competition. Not just for you, but also your family.
Aran Zalewski: “As hockey players, all we want to do is compete, play internationals and play at the highest level at the ultimate events like World Cups and the Commonwealth Games. But for us, the Olympic Games is the major event on our timeline as hockey players. That is where we want to be, performing at our best under the pressure that we get from family and friends, the media and so on. For us, we really enjoy going to the Olympic Games. I was lucky enough to go to one, and it was interesting circumstances for me as it didn’t go as well as we would have liked [6th place at Rio 2016]. So, we are looking forward to going to prove ourselves at an Olympics, because we have only won one [men’s] gold medal as a nation. For such a strong hockey nation that gets such strong results in other competitions, we’d like to amend that total of gold medals that we have.”

And Jane, you’ve already mentioned childhood dreams. Going to an Olympics really is that, isn’t it?
Jane Claxton: “Yes. I think that anyone who enters a sport, at any age or when you go into the junior or senior ranks, as Aran said that is the pinnacle of our sport. Not just attending an Olympic Games, but also doing extremely well at those Games. Coming from a sporting nation like Australia, the focus is medals, that is the expectation. I think the Olympic Games is the pinnacle for hockey, and that is the biggest accolade you can get in our sport. All of the girls in the team, especially for those who will go to their first Olympics, it is a pretty special period in the lead-up to our selection.”

It was a while back now but securing qualification for Tokyo was obviously a crucially important step. For you Jane, it was against Russia in the FIH Olympic Qualifiers, played at the Perth Hockey Stadium.
Jane Claxton: “It was an incredibly nerve-wracking experience. I know world ranking wise we are probably significantly higher than Russia, but I think it was more the unpredictable factor – we’d never play Russia before, and a lot of the girls probably didn’t even know that Russia played hockey. That was probably one of the games where I could explain to most of the girls how nerve-wracking it felt – that game was a replica of what the first game of an Olympic Games feels like. You go in with unknowns but good intentions, but when the whistle blows it is a bit chaotic to start with. That was a unique experience that we hadn’t gone through before. Once it was over, it was almost a sigh of relief, knowing that we had consolidated our qualification for the Olympics, and we could now go all guns blazing into our prep.”

And Aran, it was the Oceania Cup victory against neighbours New Zealand in Rockhampton. You dominated the first game, running out 4-0 winners, but a 2-2 draw in the second game gave the Black Sticks a glimmer of hope going into the final game.  You came out on top, winning 3-0 to seal that all important Olympic ticket. As captain, securing that Olympic berth must have been a source of great pride for you.
Aran Zalewski: “Yes, certainly. It’s always a relief when you win those games and secure your qualification. As Jane said, there is always a little bit of anxiety in the lead up, and you want to make sure you secure your position. Doing that in Rockhampton was great. We had a lot of ex-Kookaburras players up there watching us play, a lot of them Rockhampton born and bred players like Jamie Dwyer, Mark Knowles, Matt Gohdes. They were all playing in an exhibition game, so to have them there around the group for that week or ten days in Rockhampton while we qualified for the Olympic Games was good. It gave us a little bit of perspective, a look into our history. But like I said, there was a bit of relief and it was very rewarding at the time.”

Looking ahead to Tokyo now, where the focus will be all about getting out of the pool phase and into the quarter-finals. Aran, in Pool A you guys face Olympic champions Argentina, India, Spain, Oceania rivals New Zealand and hosts Japan, who you start your campaign against on 24 July. Any thoughts about that match against the Samurais, and the pool in particular?
Aran Zalewski: “Yes, our first game is against Japan and for sure we are really looking forward to that game. Similar to Russia [for the Hockeyroos], there is a bit of unpredictability about Japan. They are not a team we have played a lot against. Certainly, we know that, leading into Tokyo, they have done a lot of preparation and really ramped up their training and matches. They’ll certainly be someone who I would expect to maybe cause a few upsets or get a few goals where maybe you wouldn’t expect it. They are on our radar for the first game, and then we’ve got Argentina, who are coming off the back of some pretty good results over the last four to six years. New Zealand often prove a difficult rival for us, we’ve had some very tight results against them. That rivalry is very much alive and well. We’ve got some challenging games in our pool. I guess the best think about the format in international competition is quarter-finals. If it was eight years ago, or six years ago in a World Cup, it would just be a semi-final. For us to have an opportunity to make the quarter-finals, it’s much more realistic now, with four teams going through in your pool. We certainly want to make sure we are right up there, aiming to top our pool, which would give us a better opportunity to win those games later on in the tournament.”

And Jane, the Hockeyroos are in Pool B where you will meet against Argentina, New Zealand – another Oceania derby – China, hosts Japan and Spain, your first opponents on 25 July. You’ll be keen to hit the ground running, as will your Head Coach Katrina Powell, herself a double Olympic gold medallist with the Hockeyroos! Has she set you a target in the pool phase?
Jane Claxton: “I definitely think, by and large, we are such a competitive group that I would say top two or even top of our pool which, as Aran has said, will put us in good stead for the quarter-finals. That is our first target, being successful through those ‘round’ stages, and making sure we are putting in some good performances on the pitch so we can carry that on into the final series. Spain is another opponent we haven’t played too much against. They are quite flamboyant in the way that they play, like Argentina. It will be a game where I think a lot of nerves will be able to get played out. We’ll have a unique match-up with game styles, as they do have that kind of ‘run-and-gun’, flamboyant style of hockey. Also, some of their tactics when we played them last time took us by surprise, so I think it will be a pretty interesting first game.”

If you get through that pool phase, the sky is the limit. Is there any process that the team will apply to the competition, or is it a case of taking it game by game and seeing where the journey takes you, as the old cliché states?
Jane Claxton: “I think that first game sets you in good stead for the rest of the tournament. If you can gain some good confidence from that first game; an early win with early goals on the board, that can be taken through to the next game. At an Olympic Games, learning from Rio, it is over in a blink of an eye. Suddenly you are in a quarter-final matching up against a quality team from the other pool, so you want to be in the moment as much as possible in each of those ‘round’ games to make sure you are getting the most out of them.

Aran, you have already mentioned that Rio 2016 didn’t quite go to plan and that you want to set the record straight in Tokyo. Have you set yourselves the target of that gold medal?
Aran Zalewski: “I mean, would you set yourselves anything less? You must strive to achieve the highest, and that has always been the goal of this group. So, for us, certainly, that is the target. Whether we reach it and achieve or not, that is another story. That is the exciting bit about sport – we get to go out to see if we can achieve our dream, and that is why it captivates so many people and audiences all around the world. If we can do that, we can inspire those who come after us as well.”