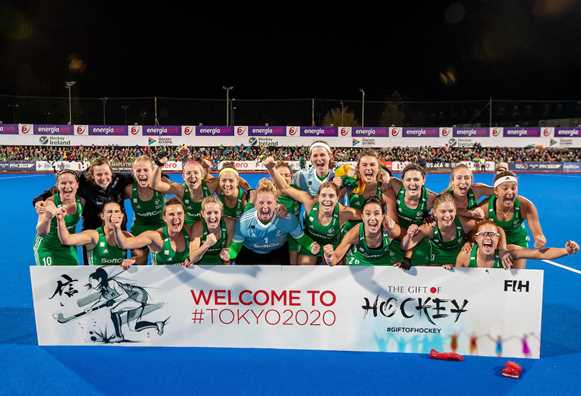 Ireland women qualified for the Olympic Games for the first time in their history. Photo Copyright: Luke Duffy / Hockey Ireland

The sixth and final day of the FIH Hockey Olympic qualifiers has drawn to a close, and the final six tickets to Tokyo 2020 have been claimed.

New Zealand's men booked a safe passage through to next year's Olympic Games Tokyo 2020 thanks to a 3-0 victory over Korea in Stratford.

Great Britain's women claimed a 2-1 win over Chile in the second match of the day, a result which gave them a 5-1 victory on aggregate to keep alive the dream of successfully defending the Olympic title that they won at Rio 2016. Later in the day, Great Britain's men joined their women on the plane to Tokyo thanks largely to Alan Forsyth, who bagged a hat-trick as the hosts won 5-2 against Malaysia on the day and 9-3 on aggregate.

Germany's women also booked their place at Tokyo 2020 with a dominant and impressive 7-0 win over Italy. The earlier game had seen Die Danas run out as slightly more tentative 2-0 winners, but the 9-0 aggregate score underlined their superiority over the lower-ranked European neighbours. Germany's men followed up their 5-0 first leg win over Austria on Saturday with a 5-3 triumph in Sunday's second game to earn their Olympic berth.

The final ticket to Tokyo 2020 was dramaticaly claimed by Ireland's women at Dublin's Energia Park, with the hosts claiming a 4-3 shoot-out victory over Canada in front of 6000 enthralled fans. The Green Army - silver medallists at least year's Vitality Hockey Women's World Cup London 2018 - trailed 3-1 in the shoot-out before staging a remarkable comeback before winning in sudden-death to achieve Olympic qualification for the first time in their history.

The final participation in the Olympic Games for any team must be approved and confirmed beforehand by their respective National Olympic Committee. More information about today's matches can be found below.

Stratford (NZL) – Men: New Zealand 4, Korea 0 (New Zealand win 6-2 on aggregate)
Goals from Stephen Jenness, Sam Lane and Russell Kane gave New Zealand men a 3-0 triumph over Korea in Stratford (NZL) to secure a place at the Olympic Games Tokyo 2020. The Black Sticks came into the contest knowing that a draw would be good enough to seal Olympic qualification thanks to their narrow 3-2 win in the first leg on Saturday. However, open play strikes from Jenness - who scored twice in Saturday's win over Korea - and Lane in the second quarter put the 1976 Olympic champions on course for victory before Kane's third quarter penalty corner goal put the contest beyond the reach of the visitors. Korea piled on the pressure in the final quarter, but the Black Sticks held their nerve to book a 13th appearance on the Olympic stage.
For more information on this match please visit the Live Reporting page by clicking here.

London (ENG) - Women: Great Britain 2, Chile 1 [Great Britain win 5-1 on aggregate]
Reigning Olympic champions Great Britain defeated Chile for the second time in two days, with Sunday's 2-1 triumph being coupled with a 3-0 success on Saturday to create a comprehensive 5-1 aggregate score-line at the Lee Valley Hockey and Tennis Centre. Mark Hager's team did all of the damage in the first quarter, with Tessa Howard and Laura Unsworth both scoring superb backhand goals to all but guarantee a place at Tokyo 2020. Great Britain were perhaps guilty of wastefulness in front of goal for the remainder of the match, with Chile netting a consolation goal thanks to Fernanda Villagran's well taken penalty corner effort.
For more information on the match please visit the Live Reporting page by clicking here.

Mönchengladbach (GER) – Women: Germany 7, Italy 0 (Germany win 9-0 on aggregate)
Three goals in the space of 8 minutes was enough to put an early damper on the Italian threat and send Germany women on their way to a dominant 7-0 victory. Added to their 2-0 win from the previous day, the aggregate 9-0 score underlines Die Danas' Olympic ambitions. The goals came from Cecile Pieper (2), Elisa Grave (2), Lena Micheel, Pia Maertens and Player of the Match Nike Lorenz. Italy fought hard but they found the German defence impenetrable and once the German's had the ball, their attacking movements were sharp, instinctive and precise.
For more information on the match please visit the Live Reporting page by clicking here.

London (ENG) - Men: Great Britain 5, Malaysia 2 (Great Britain win 9-3 on aggregate)
Thanks to a 4-1 victory in the Saturday's first leg, Great Britain's men brought a healthy advantage into their second match against Malaysia and quickly added to their aggregate tally with two goals in the first period. Alan Forsyth put GB ahead from the penalty spot with his 100th international goal (Scotland and Great Britain combined) before Sam Ward added a brilliant second, catching veteran Malaysia goalkeeper Kumar Subramiam off-guard with an unexpected shot from a tight angle. Fitri Saari pulled a goal back for Malaysia in the second quarter before Ward slammed home a penalty corner early in the third period. Razie Rahim's penalty corner rocket reduced GB's match-day lead to 3-2 before Forsyth put the result beyond all doubt, sliding home from open play before completing his hat-trick from the penalty spot to give his side a richly-deserved place at the Olympic Games Tokyo 2020.
For more information on the match please visit the Live Reporting page by clicking here.

Mönchengladbach (GER) – Men: Germany 5, Austria 3 (Germany win 10-3 on aggregate)
The teams went into this game with different agendas. Germany's interim Head Coach Markus Weise wanted a stronger performance from his team, while Austria's Head Coach Tomasz Szmidt asked his players to play for their own honour. In the end, both teams will have positives. Germany scored five top class goals, all created from fast, slick passing moves and finished with style. Austria, for their part, took the game to their much higher-ranked rivals and scored three penalty corners – all from the stick of Michael Korper. The result gives Germany the chance to build on their Olympic medal tally of 11 medals, four of them gold.
For more information on the match please visit the Live Reporting page by clicking here.

Dublin (IRL) – Women: Ireland 0, Canada 0 (Ireland win 4-3 on shoot-out)
For the second day in succession, over 6000 people packed into Dublin's Energia Park to witness Ireland's women take on Canada, and the home fans certainly went home happy. Following on from Saturday's score-less first leg, both teams showed a real determination to settle this contest in regular time, but excellent defending meant that the Olympic ticket would be decided by a shoot-out. It all seemed to go wrong for the home team, who found themselves facing heartbreak as Gillian Pinder and Roisin Upton failed to convert while goals from Stephanie Norlander, Amanda Woodcroft and captain Kate Wright gave Canada what looked like an unassailable 3-1 advantage. However, Ireland's never-say-die spirit once more came to the fore, with goalkeeper Ayeisha McFerran keeping Brienne Stairs and Shanlee Johnston off the score-sheet while sensational finishes from Ireland's Beth Barr and Chloe Watkins sent the match to sudden-death. Roisin Upton then put the Irish ahead with another wonderful finish before McFerran denied Woodcroft, giving Ireland an incredible victory and triggering scenes of utter joy in the stadium. It was a heartbreaking defeat for Canada, who matched their higher-ranked opponents throughout but fell just short in the shoot-out.
For more information on the match please visit the Live Reporting page by clicking here.

How Olympic qualification works: The winners will be determined as follows: teams will be ranked according to the number of points each has accumulated in both matches (for each match, 3 points are awarded to the winner, 1 point to each team in the event of a draw and 0 point to the loser). If there is equality among the two teams, then the teams will be ranked according to their respective goal difference. If the equality remains, a shoot-out competition will be played to establish the winner.