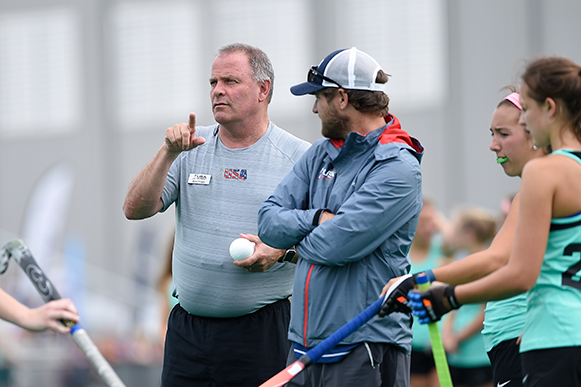 Countdown to Tokyo: Steve Horgan explains the role of an Olympic Umpires Manager

Steve Horgan is a man utterly devoted to umpiring. The American blew his whistle at both the Atlanta 1996 and Sydney 2000 Olympic Games as well as World Cup and Champions Trophy events. Since 2012, he has regularly been appointed to FIH events as an Umpires Manager, putting those years of international umpiring experience to very good use.

Later this year, Steve – who is also Director of Umpiring at USA Field Hockey – will attend the Olympic Games Tokyo 2020 as one of four Umpires Managers, working alongside Marelize de Klerk (RSA), Philip Schellekens (NED) and Minka Woolley (AUS) of Australia overseeing a team of 28 umpires.

But what exactly is an Umpires Manager? In a special interview, Steve Horgan gives some insight into what it takes to ensure that the umpires can perform at their best on the biggest stage in world sport.

Steve Horgan, thanks for talking to us! You have been appointed as one of four Umpires Managers for the upcoming Olympic Games in Tokyo. You must have been thrilled about the appointment, which was made some time ago now!
Steve Horgan: “It’s been 20 years, I guess! My last Olympics [as an umpire] was Sydney 2000, and now we are in 2021, with the extension. I’m very honoured. I am the luckiest person when it comes to hockey, to be able to do what I’ve been able to do. I’m very blessed, having great support from USA Field Hockey, friends, family, you name it. I could not be more thrilled. I’m very honoured that the FIH appointed me to the Tokyo Olympics. It’s been a lot of work. It’s going to be two years preparation for it, given the first [postponement].”

Can you give a summary of the roles and responsibilities of an Umpires Manager at an FIH events? For the Olympics we know you will be working alongside Marelize de Klerk of South Africa, Philip Schellekens of the Netherlands and Minka Woolley of Australia. There is a lot of experience there. How does that all combine together to help the umpires do their jobs?
Steve Horgan: “What we try to do is monitor them leading up to the Olympics.  They have their on-field practice, we have communications, fitness reports. It is just like a team would prepare. However, teams can stay within their group and know what they are doing. But for umpires, we have to reach around the world to make contact with them and understand what they are doing. Their challenges, their successes. So that’s kind of how we do it, to keep them going. We know that the FIH Hockey Pro League is a little slow right now, so the opportunities of high-level hockey have been minimal, but we try to monitor their domestic hockey, their international hockey and just try to get them prepared, thinking about the game. We are just getting ready to have our first full Zoom meeting with all of the umpires, but we’ve been in contact with them for over a year now. It’s been a bit of a roller-coaster, as you can imagine. But our job is to prepare them the best that we can remotely, so that when we hit Tokyo, we know that they are fit, we know that they have practised and studied, ensuring that they are as ready as they can be to go for the Games.

“Once we get there, our job is to manage them just like a team manager would. We manage the appointments; we make sure that their hotels are taken care of. Any issues that they have, they come to us. With the umpires, I believe that on six of the first seven days in Tokyo there are eight games a day, so you can imagine four Umpires Managers trying to manage eight games a day! The umpires are going to be coming and going, and we have to make appointments – there will be four appointments for each match, when you factor in the video umpire and reserve umpire and of course the two on the pitch. There is a lot of work to do there, but we basically manage. We know we are not going to sleep, which is okay! We also do video review of their games with them, things of that nature. We try to keep them as positive and engaged as possible when we are at these events, trying to manage everything from the on-field to the off-field issues that they might have.”

You umpired at both the Atlanta 1996 and Sydney 2000 Olympic Games. Clearly those experiences stand you in good stead for when you are trying to communicate with the umpires and what they are experiencing, especially when it might be their first Olympics.
Steve Horgan: “The things I hope to be able to bring to a number of them is things that we lived through. My point being that nerves are through the roof! When you walk onto that pitch at your first Olympic Games, it is like ‘oh my gosh, this is real, and I am here’. You can go to all the other events, but when you walk onto that pitch, I really cannot explain it other than saying it is awesome. But you cannot let that shatter you, knowing where you are. One of the things I know we can bring to them is yes, you are going to be in awe at the beginning of it. But once you start blowing your whistle, you pretty much get into your element. You just do what you do, and have fun doing what you do. You can block the rest of it out, it is another hockey game – a very important hockey game, don’t get me wrong! But you can enjoy it by inserting yourself into the match like you would normally do. Yes, there is a lot of tension, but trying to keep the nerves down will probably be the biggest goal as an Umpires Manager, because [playing] teams don’t accept second best. You have to be sharp as soon as you walk in and cannot let some of these outside things bother you a whole lot.”