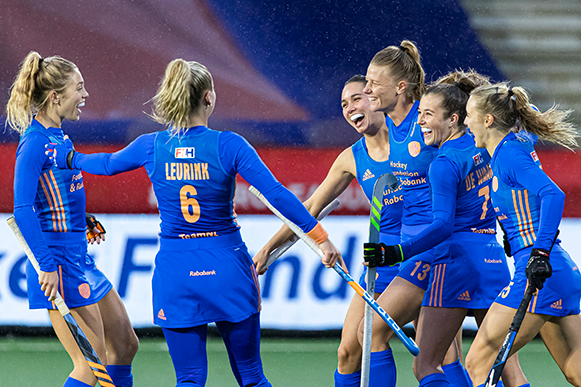 Tokyo 2020: Women’s Pool A Preview: Can anyone stop the dazzling Dutch?

With the start of the Olympic Games Tokyo 2020 just days away, we bring you the first of four preview features examining the teams that will compete in each pool. With six teams battling it out for a top four finish in order to secure a place in the cross-over quarter finals, the result of every match in the pool phase will have genuine significance.

Our first preview looks at the teams competing in Women’s Pool A, where hot favourites the Netherlands take on reigning Olympic champions Great Britain, European silver medallists Germany as well as Ireland, India and South Africa.

The Netherlands
They may not be the reigning Olympic champions, but the Netherlands are without question the team to beat at Tokyo 2020. Head coach Alyson Annan, the legendary former Australia international, double Olympic gold medallist and two-time FIH Player of the Year, has created a team very much in her own image: a perfect balance of outrageous talent, discipline and an unbreakable winning mentality. The team has been almost unstoppable in recent years, claiming the 2018 Women’s World Cup before becoming both FIH Hockey Pro League and European champions in 2019 and 2021. Can anyone stop the dazzling Dutch from reclaiming their Olympic crown?

Player perspective – Lauren Stam: “It is a tough pool, but the other pool is also tough. All of the opponents are great opponents. Of course, we are going for first place and to do our best in the pool. That is the goal in the first phase of the tournament.”
One to watch: Eva de Goede. In team full of superstars, it takes a player of rare quality to shine, but Netherlands captain Eva de Goede does just that. A defensive minded midfielder with a flawless skillset, de Goede’s ball running, tacking and visionary passes are a joy to behold. Named FIH Player of the Year both in 2018 and 2019.

For more information on the Netherlands, check out or special interview spotlight feature by clicking here.

Germany
Following their wonderful Olympic bronze medal success at Rio 2016, Germany have continued to look like a team that can challenge the very best in the world. A bronze medal in the inaugural FIH Hockey Pro League and silver medals at the two most recent European Championship events prove that Die Danas – coached by former Belgian international Xavier Reckinger – really are a class act, and they will be looking to get amongst the medals in Japan. Germany faced Italy in the 2019 FIH Hockey Olympic Qualifiers, comfortably winning both matches to create an emphatic 9-0 aggregate score-line to reach Tokyo 2020.

Player perspective – Charlotte Stapenhorst: “We have a really good pool! We know that we have to look at ourselves and make sure that every pool game, we come out a little better. We’ll proceed from game to game, I think.”
One to watch: Charlotte Stapenhorst. This lively attacker is always an impressive performer, with her magical 3D skills and creativity being a constant scourge to opposition defences.

For more information on Germany, check out or special interview spotlight feature by clicking here.

Great Britain
Having stunned the world by winning Olympic gold at Rio 2016, where they defeated the Netherlands in a thrilling shoot-out thanks to a sensational goalkeeping display from Maddie Hinch, Great Britain will be determined to defend their title at Tokyo 2020. Following Olympic gold medal-winning head coach Danny Kerry’s switch to the England and Great Britain men’s programme in 2018, the responsibility for preparing GB for Tokyo is now in the hands of former Australian international striker Mark Hager, a man who worked wonders in New Zealand with the women’s Black Sticks team. Hager successfully guided his team to a place at Tokyo 2020 by defeating Chile in the 2019 FIH Hockey Olympic Qualifiers, claiming 3-0 and 2-1 victories over Las Diablas at the Lee Valley Hockey & Tennis Centre in London.

Captain’s comment – Hollie Pearne-Webb: “I think from our point of view as a squad, we definitely don’t see it as trying to defend the title. We are a completely new group of players with a completely new coaching structure and a completely different way of playing. Our aim for our squad is to go and win a gold medal, and it would be the first time as our squad.”
One to watch: Lily Owsley. Blisteringly quick with an eye for goal, attacking star Lily Owsley is blessed with all the attributes that keep defenders awake at night. She made her senior international debut in 2013 at the age of 18 and within three years was a European and Olympic champion, with England and Great Britain respectively.

For more information on Great Britain, check out or special interview spotlight feature by clicking here.

Ireland
Ireland’s women secured Olympic qualification for the first time in their history in dramatic style, edging Canada 4-3 in a shoot-out in front of 6000 enthralled fans at Dublin’s Energia Park, also known as the Donnybrook Stadium. The Green Army – surprise silver medallists at the Vitality Hockey Women's World Cup London 2018, despite starting the event as the second lowest ranked of the 16 competing teams - trailed 3-1 in the shoot-out before staging a remarkable comeback, eventually winning in sudden-death. Ireland have been both authors and protagonists of an astounding story in recent years. Will they add another fascinating chapter in Tokyo?

Player perspective – Anna O’Flanagan: “I think our pool is extremely difficult. It is a pool that we can set our sights on doing well in, and I think there are some key games in there that we really need to win. We’ve targeted some key games that we really need to win if we want to progress in the tournament.”
One to watch: Anna O’Flanagan. Strong, fast and a great finisher, Anna O’Flanagan is a central figure in Ireland’s attacking line-up who was instrumental in the Green Army’s incredible silver medal finish at the 2018 Women’s World Cup. As Ireland’s all-time record goal-scorer, expect her to regularly find the net in Tokyo.

For more information on Ireland, check out or special interview spotlight feature by clicking here.

India
India women, coached by Dutchman Sjoerd Marijne, have been making steady progress in the past few years, moving up the FIH World Rankings as well as making the cut for the major events. Rio 2016 was India’s first Olympic appearance since 1980, and The Eves are back again for a second successive Games here at Tokyo 2020. They earned their place in dramatic fashion through the 2019 FIH Hockey Olympic Qualifiers, claiming a thrilling 6-5 aggregate victory over USA in Bhubaneswar. Having won the opening game 5-1, India found themselves 4-0 down to the Americans in Match 2 before team captain Rani fired home a stunning fourth quarter strike to secure that all important ticket to Tokyo.

Coach quote – Sjoerd Marijne: “This team has worked very hard over the last few years and has made progress consistently. There’s a good mix of experienced players and new talent, which is excellent. We look forward to taking on the best in the world in Tokyo. This is a team with a lot of potential and drive which we hope to channelise to our best performance yet.”
One to watch: Rani. India’s captain has a reputation for scoring important goals, a fact proven by netting the decisive strike against USA in the 2019 FIH Hockey Olympic Qualifiers.

For more information on India, check out or special interview spotlight feature by clicking here.

South Africa
South Africa have long been the dominant force in African hockey, a fact perfectly highlighted by their staggering record in the Africa Cup of Nations continental championship. Following Zimbabwe’s title success at the inaugural event in 1990, South Africa have won six successive Africa Cup of Nations events, their most recent being in Ismailia, Egypt in 2017. Additionally, they have also won all four of the African Olympic Qualifier competitions played since 2007, with the most recent being the 2019 competition on home soil in Stellenbosch to earn their ticket to Tokyo 2020.

Coach quote - Robin van Ginkel: “The year that we have had extra as a result of the postponement, has been a massive positive for us in growth. Our energy has been revived and I truly believe we are in a better position than we would have been a year ago. We went through a rigorous selection process and came across the team that is what we believe is the right combination to make South Africa proud.”
One to watch: Erin Hunter. South Africa’s captain is calm and inspirational defender who will be determined to play an influential role for her team at the world’s greatest sporting spectacle.

For more information on South Africa, check out or special interview spotlight feature by clicking here.

On Tuesday, we will take a look at Men’s Pool A, where Australia, India, Argentina, New Zealand, Spain and Japan will all go head-to-head in a bid to secure a place in the competition quarter-finals.