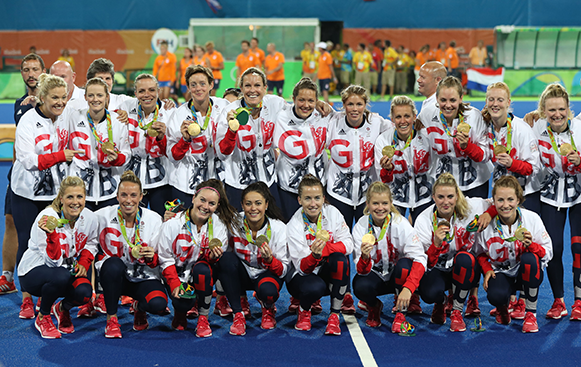 When Great Britain women won the gold medal at the Rio Olympic Games in 2016, the result was a culmination of years of hard graft and preparation for a moment just like this.

‘So much of the work was done in the build-up to the Olympic campaign,’ says former Great Britain and England striker Alex Danson. ‘We had covered every base, we dotted every ‘i’ and crossed every ’t’.

Danson was speaking as one of the guests on Episode 9 of HockeyPod, the FIH monthly hockey podcast. During the conversation the hugely respected striker explained how the gold medal was borne initially of deep disappointment suffered two years previously.

’If I think specifically around what we did that put us in such a good place, well, if I go back to the World Cup in 2014, as England, we came 11th, it was terribly disappointing. We had let ourselves and everyone else down and when we came back together as Great Britain, it was as if we had hit the lowest of the low and we had a huge mountain to climb.’

Danson, who retired in 2019 with more than 300 combined caps, pays tribute to the work of Andrea Fürst, who joined the squad as a sports psychologist, saying she was pivotal to the team’s success.

‘We reset out values and visions and they became the bedrock of our team. We learnt to win on the training field,’ says Danson as she recalls the hours of preparation that the team went through as they climbed back from the ravages of a disappointing World Cup campaign.

In the months leading to the Olympic Games, the team undertook many tasks off-field as well as on-field to ensure their preparation – physical and mental – was complete. One example Danson gives involved the squad players being asked to say what they saw as their roles within the team and on the pitch. Dansonsays the often striking differences between what players thought their role was and how others saw them really made each of the squad reconsider their place in the team.

‘It took time and many conversations but what we had at the end was a squad that knew exactly what their job was. That was pivotal when it came to the Olympics.’

Once in Rio, Great Britain hit their stride and by the end of the pool games and knock-out stages were unbeaten. The only thing between Danson and her team mates was the orange wall of the Dutch.

‘I will never forget the final. Holland were outstanding all match,’ says Danson. ‘We were defending for our lives for most of the game. We had three shots and scored three goals, well that’s the nature of the game. But, we went in for the team huddle with a quarter of the match left and we were all looking for something, a tactical change, to change the course of the game.

‘Craig [Keegan], our assistant coach called us all in and said, “put your arms round each other and look at each other”. I remember thinking, “Come on Craig, we need a hell of a lot more than just looking at each other.”

‘He just said that we should remember all that we had done back home. And, just as had we had spent hours doing in training, we had to find our way to win. He captured the fact that we had learnt how to win back at our training ground at Bisham Abbey, away from the tournament. It didn’t matter that this was an Olympic final, we needed to do no more and no less than what we had been doing every day at Bisham Abbey.”

For Danson, that was the biggest learning point from the Rio experience. ‘For me, that summed up the whole Great Britain campaign, and actually how we should approach life. We can’t ever expect something to happen, it really is about the work you put in before, the culture you develop and the relationships you build. so when you get to a moment, you know what your job is and you do it as you have been doing year in, year out.’