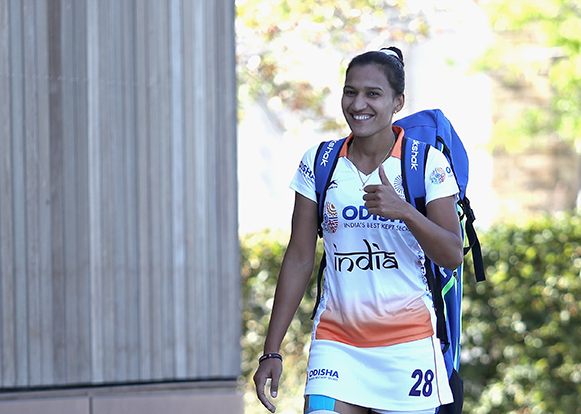 In the latest of a series of video interviews with the teams that will participate in the upcoming FIH Hockey Olympic qualifiers, India (FIH World Ranking: 9) women’s captain Rani looks ahead to her team’s crucial two-game clash against USA (WR:13). The all-important matches will take place at the Kalinga Stadium in Bhubaneswar on 1/2 November 2019, with timings to be confirmed in the coming weeks. The interview transcript can be found below.


The FIH Hockey Olympic qualifiers will be taking place very soon. How will your team prepare for these hugely important matches?
Rani: “We are very excited to play in front of our home crowd, and we are well prepared for these games, to play here in India. I think our crowd is also excited to see the women’s team playing in front of them. In the last couple of years, the women’s hockey has been growing, and in the last couple of months we have won so many tournaments. Recently we won the Tokyo Olympic test event. That gives us lots of confidence and we will carry forward that confidence into the Olympic qualifiers in Bhubaneswar. Our team is well prepared, and we are just looking forward to playing in front of the home crowd.”

What can we expect to see from your team in the FIH Hockey Olympic qualifiers?
Rani: “So far [it’s about] what we’ve changed in the training [sessions] and we just want to execute that in the Olympic qualifiers against USA, who are one of the best teams. We played them in the London World Cup [in 2018] and we played a 1-1 draw. But since then our team has improved a lot in structured hockey and in a physical way, so we will try to execute what we have [learned] in the last couple of years. We cannot beat them easily because every team wants to fight for every second to be in the Olympics.”

What are your thoughts about USA, and how is your squad feeling about these matches?
Rani: “When the draw came, we knew that [we would have to play] one of four teams. Everyone is excited that, firstly, we are playing in front of the home crowd, and secondly, we are playing against the US. The US are a good team, and we will try for every second and every ball to be in the Olympics. We know it will not be easy and USA will also fight for every second. We are looking forward to playing in front of our crowd, and that may be an advantage for the Indian team.”

Finally, what would qualifying for the Olympic Games Tokyo 2020 mean to you and your team?
Rani: “I think it is a dream for every player and every team to be in the Olympics, to represent your country and win medals for your country. It’s the same for us and our team is really excited to go to the Olympics. When we played our first Olympics in 2016 it was not a really good Olympics [for us, finishing 12th], but it was a good experience for the team, and we learned a lot from that. Now we are looking forward to the qualifiers. The first step is the qualifiers, then we will move onto the Tokyo Olympics.”

Each qualifier consists of two back-to-back matches which will be played in the same venue. The winners of these FIH Hockey Olympic qualifiers will qualify for the 2020 Olympic hockey tournaments which will be staged in Japan’s capital city from 25 July to 7 August next year and involve 12 Men’s and 12 Women’s teams.

For complete information about the men’s and women’s draw for the FIH Hockey Olympic qualifiers, click here.

For all the latest news on the FIH Hockey Olympic qualifiers, please visit our  official event website.