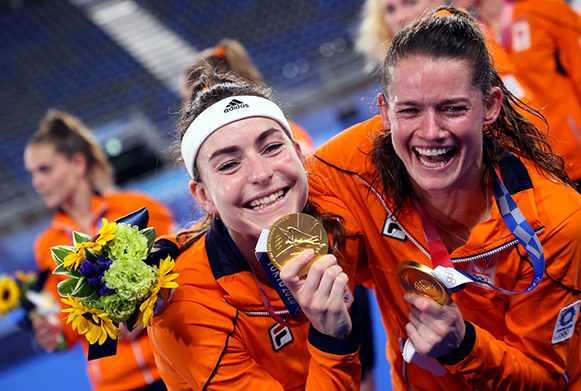 “It hasn’t really sunk in,” she admits before the interview begins. “It has been like a whirlwind between winning the gold medal and now.”

The last few days may have been a whirlwind to the 32-year-old midfielder, but to all the opposing teams who faced the Dutch on their way to the gold medal, it was more like a steam roller. Unbeaten throughout the Olympic Games Tokyo 2020 women’s hockey competition, the world number one side lived up to their billing.

“I can’t believe that we did it. I am very happy and proud of the way we played,” says de Goede. “The pressure was quite high for us. A lot of people expected us to win and that is not easy. But we stayed focused from the start and we played a little bit better each game and that was what we wanted.

“First we had to get used to each other and get used to playing at the Olympics. We excelled through the quarter-final, semi-final and then played our best in the final.”

As she compared her previous Olympic experiences, which also include a silver medal win at the 2016 Rio Olympic Games, de Goede says that the first thing she noticed was the quiet in the stadium. At such a major event, the Netherlands would normally be playing in front of thousands of people, either cheering them on or cheering against them. Either way, the quiet atmosphere was unsettling.

“But also,” she says, “it was very special because it was so intimate with the team. And we knew that we had the support of thousands of people around the world.”

The Netherlands won the gold medal after defeating Argentina 3-1 in the final. De Goede recalls the moment the final whistle went. “It was a very special moment. I still can’t believe we actually did it.

“It [the Olympic Games] took way longer than expected, so for another year and a half we had to keep pushing. And then, after all the delay, it all went by so quickly at the end.”

On their return to the Netherlands, the team went straight to the beach at Scheveningen where the Dutch National Olympic Committee hosted a party for returning athletes, family and friends. “It was special that we could have a celebration even in these times,” says de Goede.

Speaking about the Netherlands Head Coach, Alyson Annan, Eva said: “Alyson is so good at giving us trust and confidence that we can do it. She also gets us to talk about things. Apart from that, she is an amazing coach. Because of that, you go to the Games knowing and trusting you are fully prepared.”

Fans of Dutch hockey and fans of hockey generally will be disappointed to hear that Eva de Goede has hinted that she may not be gracing the stage at the Olympic Games Paris 2024 but, if this is to be the midfielder’s last Olympics, then she can gracefully retire as a true champion at the pinnacle of her sport.

Watch the full interview on Watch.Hockey