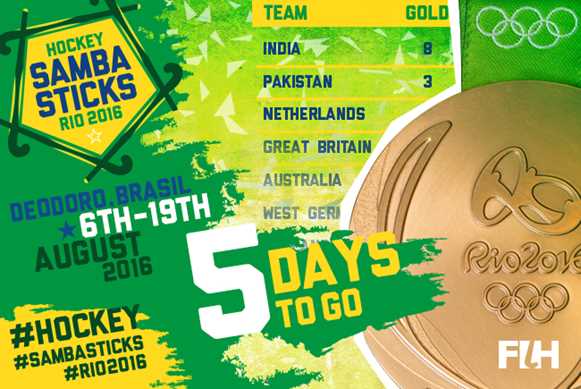 With just five days to go until the start of the Rio 2016 Olympic Games, we provide a quick look at some of the interesting statistics from the women’s Olympic hockey medals table.

The Netherlands have won the most medals in women’s Olympic hockey, with three golds, one silver and three bronzes. They were gold medallists at Los Angeles 1984, Beijing 2008 and London 2012, silver medallists at Athens 2004 and bronze medallists at Seoul 1988, Atlanta 1996 and Sydney 2000. If the team win gold in Rio, they will become the first women’s team in history to win three Olympic titles in succession.

Like the Netherlands, Australia have also won three Olympic gold medals, taking the title at Seoul 1988, Atlanta 1996 and Sydney 2000. The 1996 and 2000 victories came during the Hockeyroos’ golden era, when Head Coach Ric Charlesworth and superstar player Alyson Annan - now Head Coach of the Netherlands – ruled the hockey world, a period of dominance which also saw them also win the 1994 and 1998 World Cups.

Of the 12 women’s hockey teams competing at Rio 2016, nine have won at least one Olympic medal – Netherlands, Australia, Great Britain, Germany, Spain, Argentina, Korea, USA and China. New Zealand, Japan and India are all targeting their first ever Olympic medal in Rio.

In terms of individual achievements, Australia’s Rechelle Hawkes is the most successful female hockey Olympian of all-time, having been part of the title-winning squads from Seoul 1988, Atlanta 1996 and Sydney 2000. If the Netherlands win gold in Rio, Hawkes will have to share that title with Maartje Paumen, Naomi van As, Eva de Goede, Ellen Hoog and Lidewij Welten, who were gold medallists at both Beijing 2008 and London 2012 and have been named in the Oranje squad for Rio 2016.

Since the introduction of a women’s hockey competition at the Moscow 1980 Olympic Games, five nations have been lucky enough to strike gold in the nine editions played so far. The first four editions featured four different Olympic champions, with Zimbabwe being the surprise gold medallists in 1980 before the Netherlands (Los Angeles 1984), Australia (Seoul 1988) and Spain (Barcelona 1992) secured their respective places in Olympic history. Following Australia’s victories at Atlanta 1996 and Sydney 2000, Germany emerged champions at the Athens 2004 Games before the Netherlands claimed their second and third Olympic titles at Beijing 2008 and London 2012 respectively.