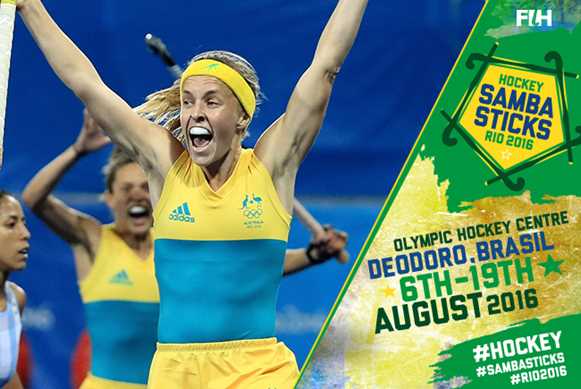 Australia’s Hockeyroos claimed a second successive victory on day six of the Rio 2016 hockey competitions, although their fine form was not good news for defeated opponents Argentina, who suffered a third loss in four matches at the Deodoro Hockey Centre.

The opening women’s fixture of the day came in Pool A, where the previously unbeaten Germany (FIH Hero World Ranking: 9) went down to a surprise 2-1 defeat at the hands of Spain (WR: 14). The Red Sticks scored twice in the opening quarter through Cristina Guinea and Carola Salvatella to establish a 2-0 advantage before Lisa Schütze pulled a goal back for Die Danas in the second period. However, the Spaniards held on for a win which has reignited hopes of a place in the Quarter-Finals. The result moved Spain onto three points, just one point behind China (WR: 7), who currently occupy the fourth Quarter-Final qualification spot but have played one game fewer than the Europeans.

In Pool B, Australia (WR: 3) inflicted a third defeat of the competition on 2016 Hockey Champions Trophy winners Argentina (WR: 2) thanks to a solitary strike from Emily Smith three minutes after half time. The 1-0 win ensures that the Hockeyroos are now certain to feature in the Quarter-Finals of the competition as they can no longer be caught by either India and Japan, who occupy the bottom two positions in the Pool B standings.

"We definitely needed that win”, said Hockeyroos captain Madonna Blyth, speaking after the match. “After we didn't start the tournament particularly well we couldn't afford to drop any more games. We knew we could win this match but we had to play really well to do it. I think our group put on a really solid performance in both attack and defence."

For Argentina, their dream of gold medal glory in Rio now hangs very much in the balance. Las Leonas currently occupy the fourth Quarter-Final qualification spot in Pool B, but need at least a draw in their final pool match on Friday (12 August) if they are to continue their Olympic journey. Their opponents in that match will be India (WR: 13), who will go into their meeting with the Pan American champions knowing that a win would be enough for them to reach the last eight.

USA (WR: 5) and Great Britain (WR: 7) claimed fourth successive victories at Rio 2016, meaning that both are now certain to achieve top two finishes in Pool B. Competition top scorer Katie Bam netted twice as USA powered to a 3-0 success over India, while strikes from Lily Owsley and Nic White helped Great Britain overcome strong resistance from Japan (WR: 10) before winning 2-0. USA and Great Britain will go head-to-head on Saturday (13 August) to decide who will top Pool B, with the winner setting up a Quarter-Final meeting with the team that finishes fourth in Pool A.