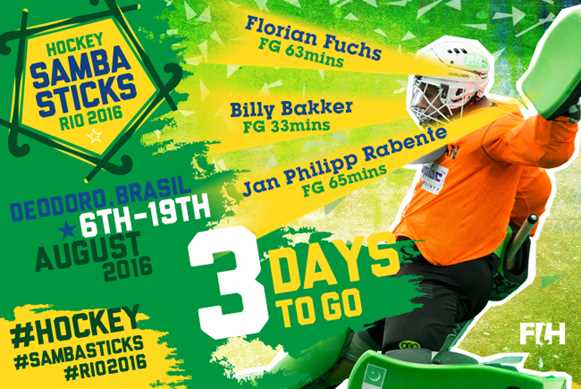 With three days to go until the start of Rio 2016, we look back at three hugely significant goals from the men’s hockey competition at the London 2012 Olympic Games, in no particular order.

For the fourth time in five Olympic Games, Australia were defeated at the semi-final stage as Germany overcame the top-ranked Kookaburras to secure their place in the London 2012 final. The Aussies lead twice in the match thanks to strikes from Kieran Govers and Glenn Turner, with goals from Moritz Fürste and Matthias Witthaus levelling the scores before a penalty corner from Timo Wess put the Germans ahead for the first time with 11 minutes remaining. The killer blow arrived seven minutes from the end, with goal-machine Florian Fuchs sliding in at full stretch to slam a first time strike into the goal. Although Fuch’s finish was excellent, the goal was made by Timo’s younger brother Benni Wess, who surged down the left before eliminating both the chasing Australian defenders and the goalkeeper with a perfectly weighted pass into the path of his onrushing compatriot. Fuchs rarely needs a second invitation, and Die Honamas took a huge step towards winning their second successive Olympic title.

The second men’s semi-final at the London 2012 Olympic Games will be forever remembered for one of the most stunning team performances in the modern era. Great Britain were widely predicted to give the Netherlands a stern test, but the in-form Dutch simply blew their opponents off the field with an immense display, powering to a 9-2 victory over the home favourites. Dutch attacking midfielder Billy Bakker had a sensational game, scoring a hat-trick in the contest. Bakker’s third goal – a breathtaking backhand effort from an almost unfeasibly tight angle - was certainly his best of the game, but it was his first goal that really showed that the Dutch were simply a cut above the Brits on the day. With the score at 3-1 just before half time, Oranje tore through the Great Britain defence with a string of high-speed, one-touch passes, with Bakker being on hand to both finish the move and effectively put the Dutch into the gold medal game. It was a team goal of the highest order, showing that the Netherlands were absolutely at the top of their game. It also sent a message to Germany that they would need to produce something extraordinary in the final if they were to successfully defend the Olympic title that they won in Beijing four years earlier.

Jan Philipp Rabente scored both of Germany’s goals in their remarkable victory over the Netherlands, ensuring that his side claimed the gold medal ahead of a team that had beaten them in the pool phase and crushed Great Britain so convincingly in the semi-finals. Rabente’s winner arrived five minutes from full time, with Tobias Hauke’s searching pass from midfield being touched on by Benni Wess before Rabente netted from close range to break Oranje hearts. Although an Olympic gold medal-winning goal is always going to be the most important strike of the competition, the significance of Rabente’s first strike should not be underestimated. The Netherlands had dominated the majority of the first half but could not find a way past Germany’s supremely organized defensive line before Rabente produced a moment of brilliance, weaving into the Dutch circle and scoring with a glorious diving finish. It was Germany's first shot on target in the game. Remarkably, Rabente went into the match having scored just six times in his previous 77 internationals, making him the squad’s joint lowest scoring outfield player alongside central defender Max Müller. Speaking after the match, Rabente said: "My aim in my career is not to score goals but just to win. If there is a need to score two goals to win, then I'll score two goals. I don't even know how I scored that first goal."