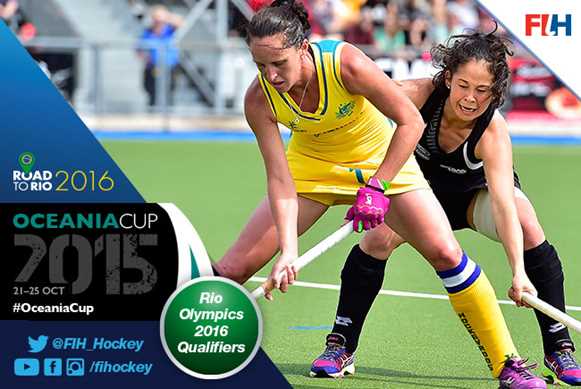 Its a double header between New Zealand and Australia as the men’s and women’s teams will both face off in the Oceania Cup finals tomorrow in Stratford, New Zealand.

Men
For New Zealand men, it is a must-win game as nothing less means they will not be going to Rio for the 2016 Olympics.

Coach Colin Batch said: “We are clear - we just need to forget the occasion and go out and play. We have a lot to gain from the game and that is how we will approach it.”

Australia top the table going into the finals after a 36-0 win against Samoa in their final pool game. Six goals apiece for Jamie Dwyer and Matt Ghodes, with four goals for Trent Mitton and hat tricks for Flynn Ogilvie, Glenn Turner and Tom Craig ensured that Australia finished unbeaten at the top of the group.

Looking ahead to Australia's clash with New Zealand, coach Paul Gaudoin said: “The important thing tomorrow is that we try to make sure we play a high intensity match and put them under a lot of pressure.”

New Zealand's Black Sticks also eased their way into the final with a 12-0 victory over Fiji. Although Fiji have been on the end of high scoring defeats in this tournament, they are a side that is making rapid improvement.

The Black Sticks were held to a 2-0 lead in the first quarter. Ryan Archibald scored from open play in the first minute, and Simon Child added to the scoreline with a penalty corner, but Fiji defended effectively in those opening stages.

It was in the third quarter that the damage was done. The score at half-time had been 5-0, but a further five goals in an 11 minute frenzy consigned Fiji to a double figures loss. There were hat tricks for Hugo Inglis and Kane Russell, with Archibald and Child both adding to their tally and Stephen Jenness finding the net.

Samoa and Fiji men will now battle it out for bronze on Sunday.

Women
The scene is set for the final between rivals New Zealand and Australia in the women’s competition as the two teams met in the last pool game and came away with a hard-fought 2-2 draw.

Kat Slattery gave Australia's Hockeyroos the lead just before the end of the first quarter. This lead was wiped out in the 17th minute when Kirsten-Leigh Pearce managed to evade her marker and shoot past Ashlee Wells. The Australian ‘keeper had only just come on the pitch after Rachel Lynch went off.

It was then New Zealand’s turn to enjoy the lead, Olivia Merry scoring from a penalty corner in the 39th minute. New Zealand's Black Sticks defended their lead right until the final few minutes of the game, but a drag flick penalty corner from Jodie Kenny with just four minutes remaining was as accurate and reliable as ever to score one goal and end the game 2-2.

The result means New Zealand top the group by virtue of a better goal difference. Although both teams have qualified for Rio, expect the final to be a fierce competition to establish continental bragging rights.