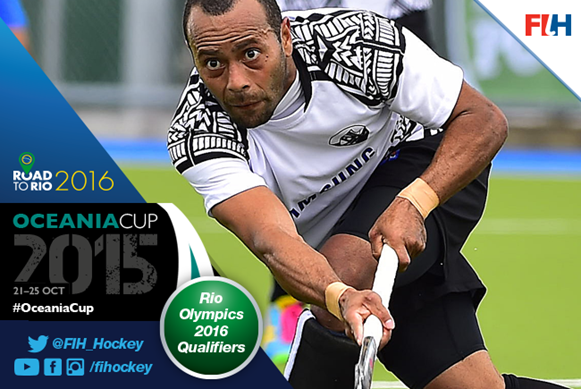 This result meant that Japan, not involved in this continental championship, qualified for the Rio 2016 Olympic Games.

Japan's qualification was confirmed due to the fact that the winner of the Oceania Cup will qualify for the 2016 Olympic Games as Oceania continental champions, while the loser of the final, whether Australia or New Zealand, will qualify from their ranking at the Hockey World League Semi-Final.

As a result, this opened up a further qualification spot which Japan secure as the team who ranked highest at the Hockey World League Semi-Finals not already qualified.

Jodie Kenny opened the scoring for Australia's Hockeyroos in the fifth minute and then went on to score a hat trick – two penalty corners and a penalty stroke. Emily Smith scored four goals, while Brooke Peris and Ashleigh Nelson also scored hat tricks.

In an astounding period of play in the first quarter, the Hockeyroos scored three goals within a one minute time frame.

The match was a memorable one for Laura Barden, as she scored her first goal while wearing the green and gold since making her debut in September.

Australia Coach Adam Commens, said: “Its difficult playing a team like Samoa in terms of trying to play the way you want but trying to be respectful at the same time. I thought our girls did really well today.”

Men
Fiji and Samoa met in international competition during Hockey World League Round One, a match that Fiji won 13-1.

Today's match demonstrated Fiji’s improvement over the past two seasons as they put 20 goals past a Samoa team that worked hard but were unable to cope with Fiji's pace and intensity.

The Samoans weren’t helped by patches of ill-discipline, which meant they played a quarter of the game with only 10 men on the pitch.

Leevan Dutta was the architect of much of Samoa’s downfall as he hit eight goals past Taumaloto Tuiuli in the Samoa goal.

Adrian Smith scored a further four goals and there was a brace a piece for James Saqacala, Martin Fong and Jerome Edwards. Mark Tapusoa of Samoa received a green, followed by a yellow card in a match that was feisty and competitive.

Speaking after the Fiji game, Laijipa Naulivou, Secretary of the Fiji Hockey Federation and Team Manager at the Oceania Cup, told FIH: "It's a great experience being here and playing against the likes of Australia and New Zealand. For a small nation like Fiji, we can learn a lot from some of the world's top ranked teams (Australia and New Zealand). It is also important for us to earn (FIH) world ranking points."

The third match of the day, between the host nation and Australia, was a cagey affair with the Kookaburras claiming bragging rights as they emerged 3-1 winners and moved to the top of the table.

The match looked set to be a Kookaburra onslaught when Jamie Dwyer scored in the first 20 seconds of the game, but New Zealand's Black Sticks regrouped and there was no further score, although there was plenty of fast-paced action at both ends.

Australia finally broke the deadlock and doubled their lead through Tom Craig in the 51st minute – a well-taken field goal.

The Black Sticks fought back and Hugo Inglis reduced the deficit four minutes later, another fine field goal. As the host nation pushed for the equaliser, Australia were able to capitalise on some gaps in the defence and Glenn Turner put the game beyond doubt in the 57th minute.

With one pool match each remaining for the four men’s teams, New Zealand and Fiji will play in a winner takes all game, with a place in the final against Australia and one last shot at Olympic qualification awaiting the victors.