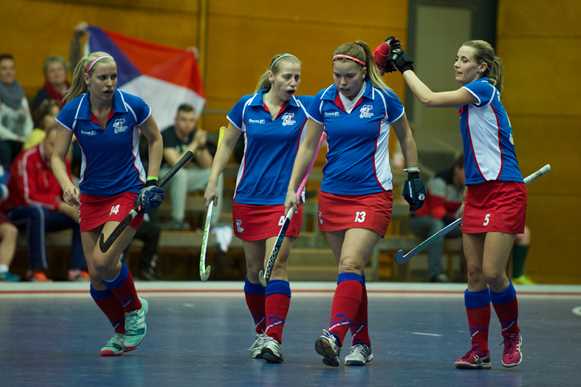 Day 2 of the women’s Indoor World Cup competition has come to an end, with reigning champions Germany and 2007 champions the Netherlands maintaining their winning ways by each claiming their fourth successive victories. However, when it comes to eye-catching performances, Australia and Czech Republic are certainly giving them a run for their money in Leipzig.

Germany continue to please the home fans by producing top class indoor hockey, and made it four wins from four by defeating Austria 10-1. “We made a super start”, said Germany’s Lydia Haase, who scored three times in the contest. “It is amazing to play here as there are so many people in the stands supporting us. We are looking forward to playing Australia tomorrow. We know that they are good, and if we want to win the tournament we have to beat everybody.”

In-form Australia stayed level on points with Germany at the top of Pool A by edging past Belgium 4-3, bagging a remarkable fourth successive victory. The Aussies have openly admitted that their squad came into this event with masses of indoor training in the bank, and their efforts are clearly paying dividends.  Friday’s meeting with the host nation is all set to be a cracker, with the winner sealing top spot in the Pool.

Ukraine missed the chance to join Germany, Australia and Austria as the Pool A quarter-finalists by drawing 4-4 with Canada, a score-line that disappointed Ukrainian scorer Yana Vorushylo. “We are not happy with today’s result as we had opportunities to score but we didn’t do it. We definitely need to improve this but it remains our target to reach the quarter-finals.”

Although one place remains up for grabs in Pool A, Pool B is already settled, with Netherlands, Czech Republic, Poland and Belarus all qualifying for the last eight. The Netherlands have been in brilliant form so far here in Leipzig, so much so that many see them as potential champions. Their fourth victory of the tournament came against Belarus, winning 8-1 with Lieke Hulsen and Pauline van Nes both scoring hat-tricks as the Dutch extended their advantage at the top of Pool B.

Despite the fine form shown by her team, Netherlands captain Karin den Ouden was keen to play down the hype. “You can never be satisfied as we know that there will be tighter games from the quarter-finals. The fact that we are now seen as the big favourites doesn’t mean anything to us. The first day to be satisfied could be after the final on Sunday.”

Although the Dutch have been the standout team, Czech Republic have certainly left their mark on Pool B. Following this morning’s defeat against the Netherlands, the Czechs made it nine points from a possible twelve with an 11-1 thrashing of Kazakhstan, helped greatly by four goals from Katerina Lacina. "I think this was a good game”, said Czech star Kamila Dukatova. “We tried to continue on the same level in the second half but this was difficult as we scored six goals in the first. I think our first two days are very satisfying. The experience gained in the morning's game against Netherlands will help us to progress in this tournament."

It was a good day in terms of results for Poland, who following up this morning’s 6-1 victory over Kazakhstan with a 5-1 win against South Africa. “We are glad that we got six points today, but we are not happy with the way we played”, said Poland’s Joanna Wieloch. “We will put everything into tomorrow when we play the Netherlands as we really want to avoid playing Germany in the quarter-final.”

You Tube - Live from Friday
The FIH You Tube channel will become active from the quarter-finals, with highlights of key matches being posted as soon as they become available. To visit our You Tube channel, click the link below: www.youtube.com/fihockey