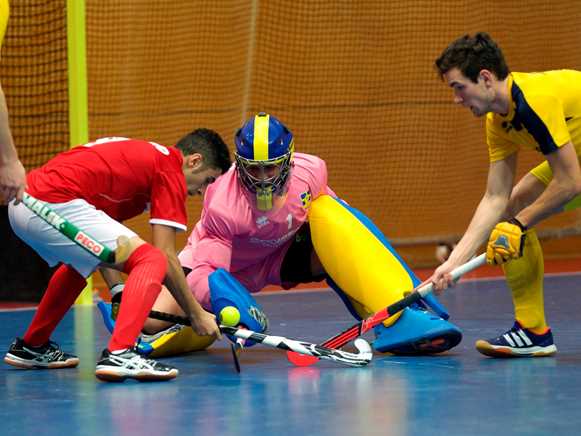 Sweden qualify as quarter-finals are confirmed

The final Pool matches of the men’s competition at the Indoor Hockey World Cup have been played and the line-up for the Saturday’s quarter-finals has been confirmed. Germany, Russia and Poland are the only teams who remain unbeaten in the competition and are joined in the last eight by Austria, Netherlands, Sweden, Switzerland and Iran.

Pool A runners up Austria face Pool B’s third placed team Poland at 0900 (UTC / GMT +1), with Pool B runners-up the Netherlands playing Sweden, who finished third in Pool A at 1030. Home favourites and Pool A winners Germany butt heads with Pool B’s fourth ranked team Switzerland at 1200 before Pool B winners Russia clash with Iran, who finished fourth in Pool A, at 1330.

All of the quarter-final matches will be live streamed on the FIH You Tube Channel, so make sure you tune into the action. More information about the final round of Pool matches can be found below.

Pool A winners Germany made it five wins out of five with another convincing display against Australia, who finished bottom of the table. Alexander Otte contributed three goals to a 9-4 win over the Aussies. Germany team captain Moritz Fürste said: “I’m loving playing in front of the crowd here, it really is a very special experience.”

Austria finished second in Pool A but were disappointed by their 2-2 draw against Czech Republic, who finished the pool in 5th place. Austrian captain Benjamin Stanzl said: “This result hurts. We need to check on the video what when wrong.  Although we had already qualified, we really wanted to play our best today not just for ourselves but also out of respect for our opponent.”

Sweden grabbed a place in the quarter-finals with a remarkable 10-8 victory over Iran, who finished level on points with Czech Republic but qualified for the quarters due to more wins. Sweden’s Björkman brothers had a massive influence on the game, with Johan netting five times with brother Joakim scoring a hat-trick. “In the beginning we played very well, but we made simple mistakes”, said Johan. “I’m sure that we are now in the flow, and the team also gives 100%.”

A brilliant treble from Alexander Zhirkov inspired Russia to a 5-4 triumph over the Netherlands, a result which sees them finish at the top of Pool B ahead of their opponents. “We are a team which is very strong physically and today we displayed the true team spirit”, said Russia’s Sergey Spichkovskiy. “Our coach and our fans gave us the power to win this match today.” Bjorn Kellerman, who scored twice for the Netherlands, said: “We are disappointed because in my opinion we were the better side. It is not a great feeling to lose our last match before the quarter-finals.”

Triple World Indoor Silver medallists Poland may have finished third in the Pool but remain unbeaten going into the quarter-finals, having completed their Pool B campaign with a 6-3 win over bottom-placed Canada.  “We were up 3-0 but we saw that we still need to find ourselves”, said Poland’s hat-trick hero Philipp Weide. “We are looking forward to playing Austria in the quarter-final although we wouldn’t have chosen to play them, something which is probably true for them regarding us.”

Fourth place in the Pool went to Switzerland, who defeated South Africa 4-1 thanks in part to a double strike from Manuel Keller.  “We have reached our goal by qualifying for the quarter-final”, said Keller. “Meeting Germany there is a highlight for us and we will play the best we can, but we also want to enjoy the atmosphere.”

There were also four matches from the men’s 9-12 classification phase, with Czech Republic defeating South Africa while Australia took the win against Canada on Friday night. The winning teams will play-off in the 9-10 classification game, with the losers playing for 11-12.