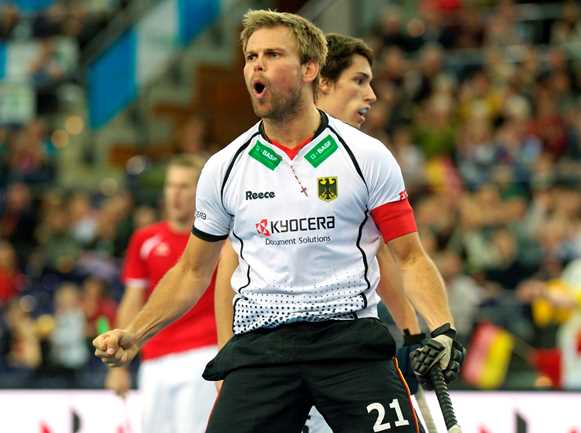 Germany defeat Austria in “clash of the giants”

The reigning Indoor World Champions were given a stern test in their Pool A encounter, with the Austrians fighting back from 3-0 down before time eventually ran out with the score at 5-4. “We knew that it was always going to be a tough game against the Austrians, but we are very glad to have won it”, said Germany’s goalie Tobias Walter.

Germany and Austria remain the only confirmed quarter-finalists from Pool A at the end of Day 2, with Iran, Australia, Czech Republic and Sweden all still in contention going into Friday’s final round of Pool matches. It was a good day for the Iranians, who added a 3-3 draw with Czech Republic to the three points they claimed against Australia earlier in the day. Iran’s Hamid Noraniyan netted the equaliser in the final minute of the match to earn what could be a crucial point in the race for the quarter-finals. The Czech team currently sits on two points alongside Australia and Sweden, two teams that went head-to-head and also recorded also recorded a 3-3 draw.

Russia and the Netherlands remain unbeaten after four matches in Pool B, with both teams having three wins and a draw ahead of Friday’s showdown between the two nations in the final round of Pool matches. Russia dropped their first points of the tournament in an electrifying 5-5 draw with Poland, who have also qualified for the quarter-finals. Remarkably, Russia fought back from 4-0 down against the triple Indoor World Cup Silver medallists before drawing level ahead of a dramatic finish.

Two goals were scored in the final minute of the contest, with Bartosz Zywiczka seemingly winning the game for Poland before Russia’s Mikhail Proskuryakov levelled seconds later. “Poland played very well, but I’m glad we came back with the equaliser”, said Russian goalkeeper Artem Dryanitsyn. “We showed great character, but it seems that we needed the challenge to show our full power.”

“In my opinion, we lost two points instead of winning one in this match”, said Poland’s Dawid Zimnicki. “The draw was really unfortunate. Our goal should have been to reach the final of this tournament, but for now we need to ensure that we avoid playing Germany in the quarter-final.”

Two goals from team captain Robert Tigges helped the Netherlands to a 5-2 win against Switzerland. “After drawing with Poland in the morning we focused on our match against Switzerland because we really want to finish first in the table, which would help us get an easier opponent in the quarter-final”, said Robbert van der Peppel.  “We dealt with the pressure much better than in the morning.”

Christian Stengler gave his reaction the result, stating: “We accepted the challenge and we knew that it was going to be a tough match. We were a bit unlucky in our attacking play today, but now we have a real knock-out match tomorrow against South Africa to see who gets in the quarter-final.”

South Africa and Canada played out an entertaining 5-5 draw, a point which keeps the South Africans in with a chance of reaching the quarters but was not enough for Canada.


You Tube - Live from Friday
The FIH You Tube channel will become active from the quarter-finals, with highlights of key matches being posted as soon as they become available. To visit our You Tube channel, click the link below:
www.youtube.com/fihockey