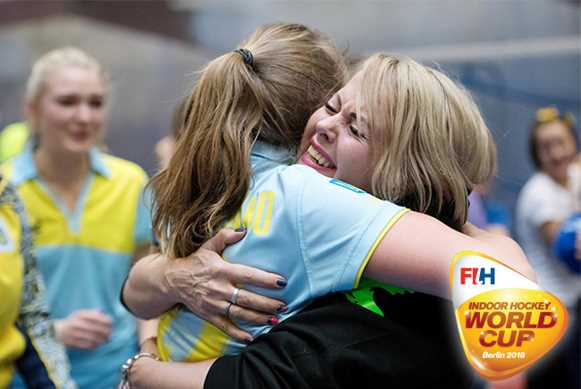 Berlin, Germany: Following an exciting final round of pool matches at the Max-Schmeling-Halle on Friday (9 February), the line-up for the quarter-finals of the 5th Women’s Indoor Hockey World Cup 2018 is now known.

The cross-over quarter-finals will take place on Saturday 10th February, with Belarus versus Australia getting underway at 1000 Central European Time, followed by Ukraine taking on Switzerland at 1130. Germany and Poland go head-to-head at 1300 before Netherlands play Czech Republic at 1430.

In Pool A, Netherlands made it five wins from five matches with an 8-4 victory over USA (WR:20) thanks in part to a hat-trick from Donja Zwinkels. The result left the Americans just outside the quarter-final qualification positions due to their inferior goal difference to Poland, meaning that USA were relying on the Poles to slip up in their later match against Belarus. While Poland finished on the wrong end of a 2-1 score-line against the impressive Belarusians, their effect on the goal-difference was not enough to give USA a place in the quarter-finals.

Switzerland claimed a third place finish in Pool A thanks to their third win in succession, overpowering bottom-of-the-table Kazakhstan (WR:12) 4-0 thanks to goals from Karin Bugmann, Alexandra Wälti, Stephanie Wälti and Tamara Trösch.

"We set ourselves the goal of reaching the quarter-finals but that is not always easy as you have to win the matches to do it”, said Switzerland’s Julia Stühlinger after the match. “We are pleased to do it and also that we avoid Germany in the quarter-finals.”

The opening Pool B match of the day saw Czech Republic fall to a 2-1 defeat against Ukraine, with captain Yana Vorushylo and Oksana Ponomarenko scoring the goals that left the Czechs in real danger of missing the quarter-finals. A win for Namibia (WR:14)  against bottom of the table Russia (WR:17) would have been enough for them to leapfrog Czech Republic into fourth position. Although the Namibians lead for long periods of the match, Russia always remained within touching distance and eventually secured a 5-5 draw, with Svetlana Eroshina’s late strike breaking Namibian hearts.

"I’m disappointed as there was some energy lacking in our team today, so the result is quite tough to take”, said Namibia captain Magreth Mengo immediately after the match. “I’m proud of the team but because I believed so much that we could do it and the disappointment is now hitting me.”

Pool B winners Germany were held to a surprise 2-2 draw by Australia, who fought back from 2-0 down to earn an impressive point against the European champions. Viktoria Huse and Anne Schröder established a 2-0 advantage for the home favourites, but two goals in the final four minutes from Tegan Boucher and Lauren Austin denied Germany what would have been a fifth successive victory at this year’s championships.

The match schedule and all other official information for the event will be available on FIH.CH, with extended coverage coming via the FIH social media channels.

Keep up to date with live games at the 5th Indoor Hockey World Cup in Berlin using FIH's new 'remind me' calendar: https://fih.calreply.net/remindme