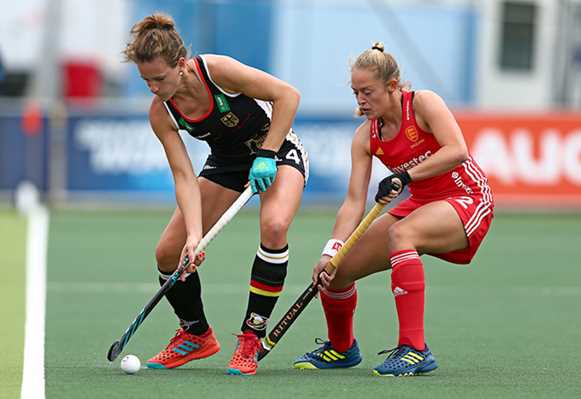 Pitch size, playing surface, temperature, number of players on the pitch – the basic differences between the indoor game and the outdoor game are obvious. But what about the skills and abilities that are needed to be a successful indoor or outdoor player? And can you be good at both?

Steve Willer is Head Coach to the Australia men’s indoor hockey team. He gives us his opinions on the difference between the two disciplines.

“The main differences are the close-in skills, the passing techniques and the consequences for simple skill errors. In outdoor hockey there is a reliance on hitting or slapping the ball to pass, with the ball moving greater distances and players away from the ball not being involved.

“In indoor hockey, the ball is moved shorter distances, with pushing and a greater use of deception in passing, and all players on the court are continually involved.”

These are all points that German women’s captain Janne Muller-Weiland agrees with. She said: “In the indoor game, with just six players on the pitch, you know that every mistake will be punished. This means you need very good skills and a high level of decision making. You need to be able to make quick decisions under immense pressure. Your passing must be effective, fast and quick.”

When it comes to the outdoor game, being able to play the ball in the air gives another dimension. Netherland’s women’s Head Coach Marieke Dijkstra says: “While there are many similarities, once you move outdoors, the skills become 3D and it becomes far more physical. It is a bigger area and you are doing a lot more running over further distances, with a lot more running back and changing direction.

“One thing I would say is that the press we use indoors, if you used it outdoors, it would be very effective. A good press will make it very difficult for a team to get out.”

"In the indoor game you know that every mistake will be punished. This means you need very good skills and a high level of decision making."
Janne Muller-Weiland, Germany (Indoor & Outdoor)

Muller-Weiland agrees that there are many things that outdoor teams can learn from the indoor game. “If you are good at skills indoors, you will be even better outdoors,” she said.

“It is very hard to go one-on-one in the indoor game against a flat stick. If you are good at that, and then you take the skill outdoors where you can lift the ball as well, so you get to use 3D skills, then you will be an even better outdoor player.”

That said, there are some people within the game who feel the two versions are incompatible. “The most common comment I hear from outdoor hockey coaches and players is that indoor hockey is not good for outdoor hockey as players get into a bad habit of tackling with a flat stick,” says Willer.

“I would argue that the ability of a player to tackle flat stick and protect their feet is critical in outdoor hockey, especially when defending in one’s own circle. I do not personally believe there are any bad habits that a player picks up from indoor hockey, especially when it is coached correctly. In fact, what players pick up from indoor hockey enhances and improves their outdoor game.

He continued: "Often outdoor training sessions are small games or drills involving 5v5, 4v4, 3v2, etc situations. The game of indoor is basically a 5v5 game (with the addition of goalkeepers) where players need to perform under pressure, in confined spaces, as a team.”

The Australia Head Coach identified the qualities needed to be a great indoor hockey player. He said: “They can both defend and attack. They perform all their skills at a high level, while under pressure from opponents and in confined spaces. They have outstanding 2D elimination skills and can manipulate the ball through the smallest gaps. Indoor hockey is fast paced and great indoor players think multiple moves ahead, working as a team. And yes, players can be equally good at both indoor hockey and outdoor hockey. Look at Germany’s Moritz Fürste and Tobias Hauke for great examples.”

See the stars of indoor hockey in action at the Indoor Hockey World Cup from 7-11 February. Watch all of the action free and live from the Main Hall via FIH's YouTube channel.