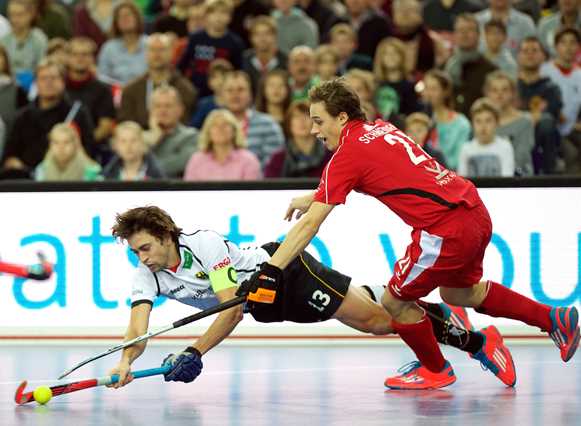 The fifth Men's Indoor Hockey World Cup takes place at the magnificent 7,000-seat Max-Schmeling-Halle in Berlin, Germany, from 7-11 February 2018. The sports stadium will play host to 80 international matches, with 24 matches taking place each day on the first two days of competition. In total, 24 teams are participating, 12 men’s teams and 12 women’s teams.

Among the participating nations are the current title holders, Netherlands women; the newly-crowned EuroHockey Indoor champions, Germany women; Germany men, who have won three of the four previous editions; and tournament debutants USA women, Kazakhstan men. The current men’s title holders, the Netherlands, failed to qualify for this event.

The competition format comprises pool matches, followed by cross-over quarter-finals involving the top four placed teams in each pool. The winners of the quarter-finals progress to semi-finals and contest places 1-4; the other four teams play for positions 5-8.

Germany have won the title three out of four times. At the 2015 event in Leipzig they lost their title to the Netherlands but this year they are seeking to regain the title. A team comprising Tobias Hauke, Matsa Grambusch, Martin Häner and Christopher Rühr will certainly mean business. Add in a home crowd and you have a team that will be pushing for gold.

Three second place finishes for Poland means the European team have come tantalisingly close to realising their potential at this event. A seventh place finish in 2015 was a blot on an otherwise excellent indoor hockey cv. In Artur Mikula, Poland have one of the game’s greats, while Kristin Makowski played a huge role in Poland’s fourth place finish at the 2018 EuroHockey Championships – an entertaining match in which they lost 9-8 to Germany.

A podium finish has to be a viable aim for the Czech Republic. They come to the competition on the back of a workmanlike campaign at 2018 EuroHockey Championships. They finished in fifth place there but over the course of the event, players such as Lukas Plochy and Jakub Kyndl showed immense ability. With seven players over 30 in the team, this is a squad with a depth of experience.

Australia have qualified for every edition of the Indoor World Cup but have never finished higher than seventh. Their current ranking suggest that they might not push for a podium place this time but as everyone knows, the Australia team will always leave everything on the pitch as they strive for a victory. Coach Steve Willer will look to Thomas Sinclair, Benjamin Rennie and Heath Ogilvie to pass on the experience they gained at the 2015 Indoor World Cup.

Kazakhstan are making their debut at the Indoor World Cup this year after finishing runners-up to Iran in the 2017 Indoor Asia Cup. The event is certain to be a huge step forward in Kazakhstan’s elite hockey development and Berlin will provide a great platform for the likes of talented forward Yermek Tashkeyev.

Pan American Hockey Federation continental champions Trinidad & Tobago are making their second appearance at the Indoor World Cup. They finished 12th at the 2007 edition in Vienna. Several members of the current squad were in Vienna and will be bringing all the experience gained then to this competition. Expect strong performances from Akim Toussaint, captain Solomon Eccles, goalkeeper Ron Alexander and Mickel Pierre, who all know what it take to compete at this level.

In Pool B, Austria are the current in-form team and many people’s favourite to lift the trophy. Silver medallists in 2015, the pain of loss could drive Austria to go one better this time around. Crowned continental champions in Antwerp at the recent EuroHockey Indoor Championships, the team has names synonymous with indoor hockey. Benjamin Stanzl and Michael Koper are standout players on the pitch, while Mateusz Szymczyk is an outstanding goalkeeper.

Russia have finished in the top five of the past three editions of the Indoor Hockey World Cup, showing a consistency in form and performance. If it wants to go one better and contest the medal places, the team will need to up its game following a sixth place finish at the 2018 EuroHockey Championships. Sergei Kostarev brings experience to the side as he competes in his fourth World Cup.

The Asia indoor champions Iran, bring a new style of hockey to the competition. The team has become renowned for its passion, skill and creativity. Iran gets better with each edition – a ninth place finish in 2003 has been followed by two fifth place finishes and a fourth. Head coach Safaei Esfandyar has brought an experienced squad to Berlin, with most of the team veterans of at least one Indoor World Cup campaign.

Patrick Müller captains Switzerland in both the outdoor and indoor version of the game. The team competing in Berlin is a well-balanced mix of young players – with six players 21 or under – and experienced team members. This balance worked well at the 2018 EuroHockey Championships where Switzerland finished fourth. Yves Morard is likely to be an influential figure in front of goal.

South Africa’s highest finish at the Indoor World Cup was 10th in 2003. They will be hoping to defy both this trend and their world ranking by making the quarter-finals at the very least. This is a team with a number of experienced internationals, albeit from the outdoor team. Wade Paton, Jethro Eustice and Ryan Julius are all part of the current South Africa outdoor squad and will be hoping to get a good performance at the Indoor World Cup under their belt before the Commonwealth Games in two months time.

Like South Africa, Belgium are a team with a low ranking but high expectations. The squad is packed with talented players, many of who are current outdoor internationals and silver Olympic medallists. Cedric Charlier, Gauthier Boccard and Tom Boon are among the stellar players who are looking to make an impact on the biggest international indoor stage. Belgium arrive in Berlin on the back of a performance at the EuroHockey Indoor Championships that saw them beat five teams that lie above them in the rankings to pick up a silver medal. This is a team that will be looking for a podium finish.