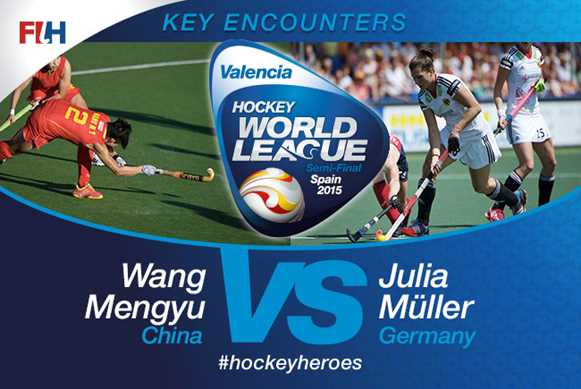 Will sleeping giants awake in Valencia

Continuing our look at key encounters in the forthcoming Hockey World League Semi Finals, we focus on two teams whose report card over recent years would probably read “could do better”. Both giants on their own continents, Germany and China have failed to impress at the major tournaments over the past few years, but both teams will be eyeing Valencia as the platform for their revival.

Germany's women's team has been one of the most consistent hockey nations in the world. Winners of Olympic Gold in 2004, winners of the World Cup in 1976 and 1981, and gold medallists in Europe in 2007 and 2013, Die Danas has a long and proud history in major championships. Despite being a regular fixture in the top 10 nations in the world – currently ranked sixth – Germany has not been the usual force to be reckoned with in recent years and now joins New Zealand, Great Britain/England and China as a team that perennially sits around the fourth-eighth ranking positions.

China is a team that also has a solidly consistent presence in the top 10 middle ranking, but unlike their European rivals, the Chinese – currently ranked seventh – has never translated that enduring presence into major medals. An Olympic silver in Beijing in 2008 and bronze in the 2002 World Cup, are the extent of the team's success in the most prestigious tournaments. However, consistently high performances on their own continent, including three gold medals in the Asian Games, means the Chinese team enjoy a presence at all major tournaments.

The two teams last met at the most recent World Cup, and to the surprise of many observers, it was China who emerged the more successful team. Victories over the then third-ranked England side and another win over South Africa, plus a 1-1 draw with Germany meant that China were left playing for fifth place, while Germany – who had a disappointing tournament by their own high standards – were left playing for seventh place, a match they lost to Korea.

More recently China participated in the Hawkes Bay Eight Nations in New Zealand, where they finished in bronze position. Yang Peng, one of the experienced Chinese players, said that her team had been working on their defence, and this was demonstrated as they held Australia to a 2-2 draw in the pool matches and only succumbed to a late penalty corner in the semi-finals, also against the Hockeyroos. In the bronze medal match, China beat Asian neighbours Korea 2-1. The Chinese coach, You Baodong, will be pleased that his top striker, Wang Mengyu has found her scoring ways again after a dry spell in the Hague at the World Cup and China will be eyeing their opening match against Canada with relish. The North American side lie 13 places below China in the world rankings and China will be confident of getting their HWL campaign off to a good start in Valencia.

There is no doubt that the Hockey World League Semi Final will be a high pressured event for China and Germany this year, as it will be both team's best chance of qualifying for the 2016 Olympics. China will be rueing their loss to Korea in the Asian Games, as their continental rivals will be able to contest the HWL, and possibly the HWL Finals in December, without the pressure of Olympic qualification hanging over them. For Germany, a poor result in Valencia will mean that they will need to do well in the European Championships in August.

But Germany has an uncanny knack of getting it right when it really matters. Coach Jamilon Mulders is an engaging and vivacious personality, who has proved that he is prepared to try unorthodox methods to get a win. Playing sweeper Julia Muller as a striker against Japan in the Champions Trophy was a case in point. Germany had failed to make any impression in the opposition’s goal circle until Muller took up her new role, but a brace for the defender spearheaded a victory. “We are always learning about the game and about each other,” said Mulders after that game. With two new assistant coaches in tow and a settled and experienced core of players, including the energetic Nina Hasselmann and the formidable Julia Muller, the teams in Die Danas’ pool will be wary of providing the platform for a German revival.