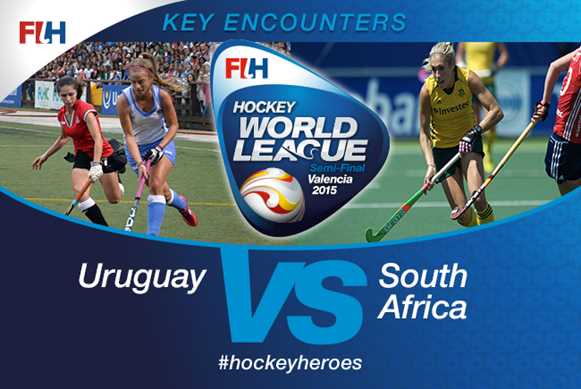 Punching above their weight

The Hockey World League Semi-Finals are the events where hockey dreams can come true, but is it possible for a team ranked 29th in the world to overturn the form books? When Uruguay face the likes of Germany and the USA, they are playing teams that are ranked more than 20 places above them, but also in their pool are South Africa, a team that knows that rankings can be overturned and no side can be discounted.

The South American team has a short hockey history. While other Pan-American nations such as Argentina, USA and Canada have long been involved in international events and competing on the global stage, Uruguay’s activities has largely been restricted to competition on the American continent. A bronze medal in the 2007 Pan American Games and a third place finish in the 2014 South American Games are the team’s best achievements to date.

At this year’s Round Two event, held in the Uruguayan capital Montevideo, Uruguay demonstrated just how far the team has come in the past few months. Comprehensive victories over fellow Pan-American teams, the Dominican Republic and Mexico, as well as a victory in the early round against eventual winners Italy meant that Uruguay out performed three teams with a higher ranking. Head coach Gonzalo Ferrer, will be looking to build on the success his team enjoyed at the Round Two event and will be reminding his team that a David and Goliath ending is never out of the question.

A team that is often cast in the role of the underdog is the South African women’s hockey team. Currently ranked 11th in the world, South Africa are more than capable of upsetting the form book. In Valencia, new head coach Sheldon Rostron will be looking for his charges to challenge the higher ranked teams for a quarter-final place.

The two teams will compete in Pool B in Valencia, Spain – a pool that also includes top 10-ranked teams Germany (6), the USA (5), and another Round Two qualifier, Ireland (14).

While Uruguay will be an unknown quantity to most of their rivals, South Africa are well-known. At the 2014 Hockey World Cup in the Netherlands they surprised England - who were ranked third in the world at the time – with a smash and grab 4-1 victory, and they came close to upsetting the Chinese in a thrilling 4-3 encounter. Although they lost to both Germany and USA in that event, the matches were close and South Africa proved they are not afraid to play attacking hockey.

Both Uruguay and South Africa have players in their teams who can turn matches. The advantage the South Africans have over their pool rivals is a squad of great experience including players such as Nicolene Terblanche, Illse Davids, Shelley Russell and Dirkie Chamberlain – all players who have experienced World Cup, Commonwealth Games and Olympic competition.

On the Uruguayan team, players that shone at the recent Hockey World League Round Two competition include the team’s top scorers Florencia Norbis and Sofia Mora, and Constanza Barrandeguy who was voted young player of the tournament in Montevideo.

South Africa will travel to Valencia knowing that they have the ability to cause an upset against the higher-ranked teams. Their form at the Hockey World Cup demonstrated that. But when they face Uruguay, roles will be reversed and as Sheldon Rostron and his team know so well, underdogs have a fierce bite.