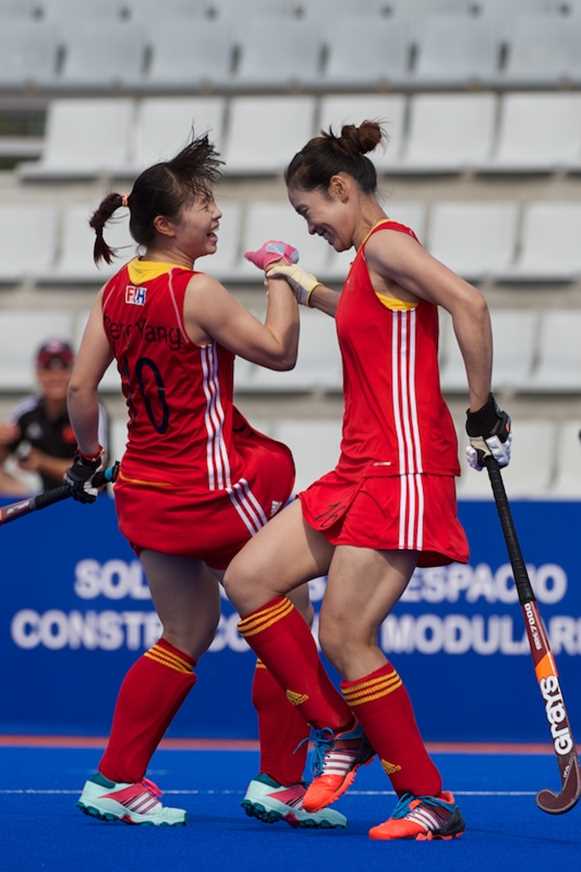 Pool A saw China and Great Britain emerge as winners in their opening games of the Hockey World League Semi-Finals Pool A in Valencia.

China’s turn of speed proved too hot for Canada, while Alex Danson was scorer turned provider in Great Britain's victory over Spain.

China found their shooting sights as superb left-wing goals from Ma Wei and Yang Peng put them on course for a 3-0 victory in the first game of Pool A in Valencia. The north American side held plenty of possession but found China a tough nut to crack.

After a scoreless first quarter – Canada earning two penalty corners to China’s one – the game burst to life when Ma Wei was picked out at the left edge of the circle. She unleashed a fine shot to catch out Kaitlyn Williams and make it 1-0. And it was a lead that was doubled just nine minutes into the second half thanks to a breathtaking counter-attack.

Hugging the left sideline, the ball was funnelled into the path of Yang. Initially, she looked to be well marshalled but a sudden turn of speed cut her loose and despite a heavy tackle, she kept her balance to slip home the goal. Jiaojiao De made their position even stronger with nine minutes to go, touching in a perfectly executed corner move for a comfortable win.

Canada captain, Kate Gillis, said: “We are happy with our first half but we had a dip in the second. We’re never satisfied with that. They are a great team and we’re coming up the ranks but we can definitely move forward from this and have a great game against Argentina. China is a high ranked team, going to multiple Olympics, and that is where we are looking to get.

Quixia Cui, the captain of China said: “Honestly, I think our speed and skill is a bit higher than the Canadian team and it made it possible for us to get out of a couple of close areas when they were pressing high in our half.”

Alex Danson’s goal and assist in the 49th minute got Great Britain's World League campaign off to a great start with a 2-0 victory over hosts Spain to close day one in Valencia.

After three quarters of intense, but ultimately scoreless, hockey, Danson was fouled at the head of the circle. She dusted herself off to convert the ensuing penalty stroke for 1-0. Within a minute, Danson was found on the left baseline from where she pinged a low cross into the path of Joie Leigh who applied a delicate touch into the right corner.

Speaking after the game, Alex Danson said: “We are absolutely delighted. One of our real strengths is we have time together and we do our research. The Spanish team are fantastic so we’re delighted with how it went.

“For both teams, penalty corner defence was world class. It went down to the little moments so we’re delighted to come away with the points.

Talking about the stroke, she said: “It’s certainly the longest I have had to wait to take a stroke with the referral. I had to keep thinking ‘stick to processes’. The second goal was off the training park; we’ve been doing a lot of work in the attacking circle and it was a composed finish from Joie [Leigh].”

Georgina Oliva (ESP)said: “The first half, they were better than us and more competitive. We were a little bit nervous. Finally, we started to play in the second half so we lost out on 30 minutes [to make an impact]. But I think it was a good match and we are pushing ourselves. “Unfortunately, I think we needed 10 more minutes to turn things around. But they are really good and scored twice which was really difficult.”