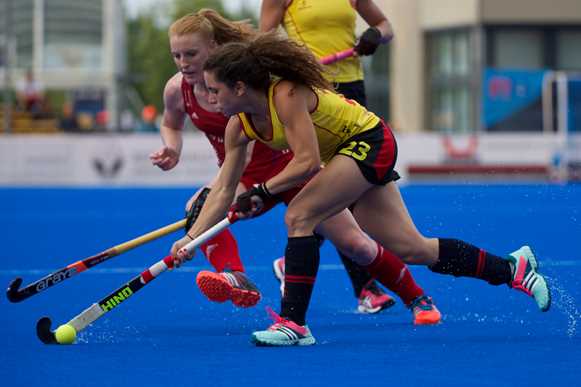 Spanish coach Adrian Lock paid tribute to Hockey World League Semi-Final Player of the Tournament Georgina Oliva, saying she is “without any shadow of doubt one of the best players in the world at the moment”.

Lock’s side finished the competition in sixth place and now face a waiting game until October to see if it is enough for Spain to reach the 2016 Olympic Games. It was not for want of effort as his side produced some sterling hockey, beating China, drawing with world number three side Argentina and coming within seconds of a semi-final spot before Germany snatched a late draw and shoot-out win.

Oliva was an integral part throughout and Lock said she was a deserving winner of the Player of the Tournament title.

“But, in the last two years, she has trained really hard, the same as the rest of the team. Her performance level has increased enormously along with the team.

“She’s a top quality player who gives us huge stability in our defence and an outlet at any stage and any circumstance from the back. And she leads on the pitch along with Rocio [Ybarra] as vice-captain. It’s a huge asset for us to have to have a star quality player along with a group of high quality players.”

Lock was also effusive when talking about the support his side had in preparing for the tournament to enable his side to optimise their performance compared to previous years.

“We have had a bit more funding available to prepare properly for the tournament. In 2013, for Round 3, we had virtually no preparation. We didn’t go to the World Cup so we tried to take advantage of the time we did have together. This year, we have had a lot more time together to practice on this pitch.

"We know the ins and outs of the facilities and how everything works. To have the home crowd behind us obviously makes everyone run that little bit more. That’s maybe helped us push through the more difficult situations we have faced in the game.”

Maddie Hinch of Great Britain picked up the award for goalkeeper of the tournament. She conceded just two goals in the entire competition, and was praised by her teammate Sophie Bray for her consistency between the sticks.

Young player of the tournament was Charlotte Stapenhorst, a young midfielder who produced a string of strong performances to guide Germany to third place and an automatic Olympic qualification spot.