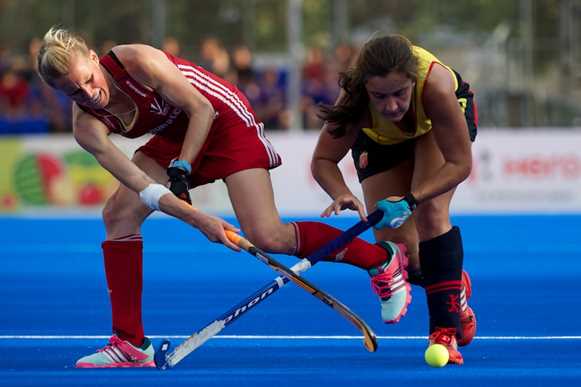 Ireland upset the form book, but Uruguay feel the heat in Valencia

Ireland, Germany, China and Great Britain will all be pleased to have recorded wins in the opening day of the Women's Hockey World League Semi-Finals in Valencia.

It was a day that Ireland's Nikki Evans and Germany's Charlotte Stapenhorst will remember as they both scored hat tricks for their respective teams; while Emily McGuire celebrated 150 caps during Great Britain's victory over the host nation Spain.

In the first match of the day, the Green Army took just five minutes to make their mark on the competition, beating their higher-ranked rivals, South Africa, in convincing fashion. Evans opened her account with a lovely clip home from the left-side of the pitch and although South Africa's Kelly Madsen levelled soon after with a deflection at the top of the circle, Ireland were quickly back in front via another Evans touch, this time from a deflection at penalty corner time.

Ireland continued to take their chances with Evans diving onto the end of Chloe Watkins’ powerful cross in the 50th minute for 3-1 and then Nicci Daly then completed the result with a spectacular solo goal, lifting the ball into the circle and cracking home on the volley.

In the second Pool B match, Germany cruised to a comfortable 8-0 win over Uruguay to get their World League semi-final campaign off to a great start, scoring five goals in the first half to the set the tone. Indeed, three of them came in the first quarter, Eileen Hoffmann volleying home after just a couple of minutes to start the goal rush. Nike Lorenz netted the first of a series of penalty corner goals before Charlotte Stapenhorst clattered home a close range finish.

Lydia Haase and Stapenhorst’s second made it 5-0 at the big break before back to back-to-back corners stretched the lead to seven – Stapenhorst’s third and one from Hannah Kruger doing the damage. Lisa Altenburg completed the win in the closing minutes.

In Pool A, China’s turn of speed proved too hot for Canada and, after a score-less first quarter, they found their shooting sights through superb goals from Ma Wei and Yang Peng. The north American side held plenty of possession but found China a tough nut to crack and succumbed to two razor-sharp incisions that broke the game.

After a scoreless first quarter – Canada earning two penalty corners to China’s one – the game burst to life when Ma Wei was picked out at the left edge of the circle. She unleashed a fine shot to catch out Kaitlyn Williams and make it 1-0. And it was a lead that was doubled just nine minutes into the second half thanks to a breathtaking counter-attack, that was completed by the agile Peng Yang. Jiaojiao De made it 3-0 with nine minutes to go, touching in a perfectly executed corner move for a comfortable win.

Alex Danson’s goal and assist in the 49th minute gave Great Britain the impetus to begin their World League campaign with a 2-0 victory over hosts Spain to close day one in Valencia. After three quarters of intense, but ultimately scoreless, hockey, Danson was fouled at the head of the circle off the back of Lily Owsley’s surging run. She dusted herself off to convert the ensuing penalty stroke for 1-0.

Within a minute, Danson was found on the left baseline from where she pinged a low cross into the path of Joie Leigh who applied a delicate touch into the right corner. These were the defining moments in a big tussle between two well matched teams who took turns to carry the momentum. Great Britain started brighter before Spain turned the screw toward the end of the first quarter. Plenty of corners were awarded to both teams with Kate Richardson-Walsh hitting the post from another set piece while Berta Bonastre’s sweep clipped off Maddie Hinch and onto the post before Danson’s late salvo won the day.