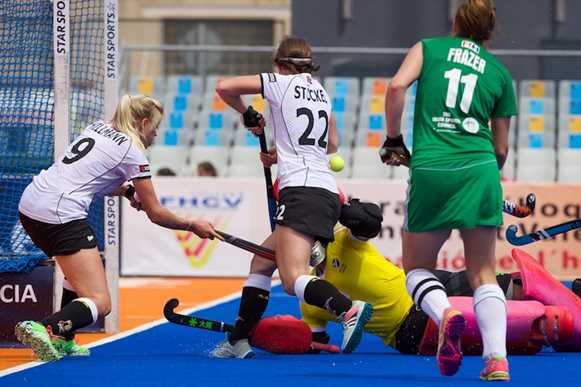 Hockey World League Valencia: USA and Germany tough it out for Pool B victories

The second day of hockey in Pool B saw USA and Germany working hard to breakdown the stubborn defences of Uruguay and Ireland respectively.

USA struggled to break down Pan-American rivals Uruguay as they battled to a 2-0 victory in their first game of the competition, while Die Danas racked up their second win of the competition with a 3-1 win over Ireland.

In their opening game of the HWL Semi-Final, USA's Rachel Dawson’s drag-flick and Kat Sharkey’s late goal gave the USA victory but the team had scratched their collective heads wondering how they could beat the diminutive Rosanna Paselle and her hard-working defence.

Speaking after the game, Paselle said: "It was a lot of hard work but we are pleased to have played an excellent match. It was good for us after yesterday. “Facing so many corners is no problem for me; I like it! We were all 100 per cent focused for this match, wanting to go better than we did against Germany. We hope to have more opportunities against Ireland and South Africa.”

Dawson broke the deadlock toward the end of the first half after 25 minutes of near total dominance. The second half followed a similar pattern with Lauren Crandall and Paige Selenski going close but no further goals accrued until the final minute, when Kat Sharkey controlled a bouncing ball and smartly turned and shot.

The opening goal scorer, Rachel Dawson (USA) said: “It was definitely a battle for our first game of the tournament, one we can learn and grow from. We did come away with the three points and that is what these tournaments are all about. “They are one of our Pan-Am competitors that we have seen in the past. They are a tough, talented team and we knew we would need to stick it out to get the result.”

In the second Pool B match, Germany held on for the second win of the tournament but they were made to work all the way in a classic battle with Ireland in Valencia in a 3-1 victory. It was a thrilling match with three efforts bouncing off the post and both sides having to save shots off the line. Ultimately, two goals in quick succession from Anna Schroder and Marie Mavers in the third quarter proved all-important. Anna O’Flanagan got one back but Ireland could not nab another to force a result before Lydia Haase nabbed a late third goal.

The Germans were first to cause danger, with Ireland's keeper, Cliodhna Sargent, saving off the line and Charlotte Stapenhorst hammering a shot off the frame of the goal. It was Ireland's turn to create, when Kate Dillon had an effort disallowed after she tipped on to the post from Nikki Evans’s cross – an earlier foot the infringement. Megan Frazer slammed a clever corner routine onto the post as the match somehow stayed 0-0 at half-time.

Germany broke the deadlock through Schroder in the 32nd minute and Mavers then got on the end of a great cross from the right to touch in for 2-0. Germany then killed off the game in the dying moments when Lydia Haase touched in for 3-1.

It was not the result that Shirley McCay – who celebrated 200 caps for Ireland – wanted. "We are a bit disappointed with the result but proud of the performance. We are disappointed to concede so late on when we had come back into the game. We created enough chances to nick a result, at least a draw. But they are European champions for a reason and they took their chances and were clinical.”

Kristina Hillman paid tribute to the opposition: "That was really hard, a big challenge. Ireland had a good structure and a good game plan. For us, we have a nice progression in this tournament because our next game, against USA, will be even tougher."