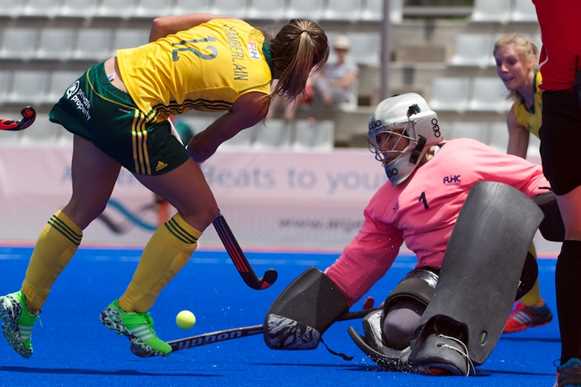 Uruguay earned their first point of the Hockey World League Semi-Finals when Manuela Vilar scored the equalising goal from a penalty corner with just two minutes left on the clock. The South Americans fought back after Celia Evans had given South Africa the lead.

The result still means that Uruguay will need Germany to beat South Africa by six or more goals to avoid coming last in the Pool, but the South Americans were pleased to have made their mark on this event.

"We had been playing well but not scoring," said Vilar, "We knew we had to score at this minute, and we had a plan against the South African defence." The other Pool B match was a titanic clash between Germany and the USA. Katie Reinprecht was the two-goal hero for USA, but Lisa Altenburg and Hannah Kruger both got on score sheet in a game where shots rained in on both goals – but both Kristina Reynolds and Jackie Briggs were up to the challenge.

In Pool A, Great Britain continued their winning ways with a 4-2 victory over Canada.

Two goals for Sophie Bray and a goal apiece for Alex Danson and Georgie Twigg sentenced the Canadians to their third defeat of the tournament.

Laura Unsworth, who celebrated 50 combined caps (Great Britain and England) said: "It was good for us to play Canada as they are not a team we come up against often. They have a well-structured press and they are aggressive."

The final match of the day was a clash between China and Argentina. Very much like the first match against Canada, the Argentinians hit the ground running and were 3-0 up by the end of the first 30 minutes of play. An uneventful second half saw China attempt to break down the Argentine defence, but as Carla Rebecchi commented after the game, "Our defensive work from the forwards all the way back, was very good today."

Wang Mengyu, captain of China, said: “Argentina is one of the strongest teams in the world. At first, we were prepared to play a really tough game. My team mates played quite well, in my opinion, today but it’s only that we didn’t convert our chances into goals while the Argentinians converted theirs, especially in the first period.