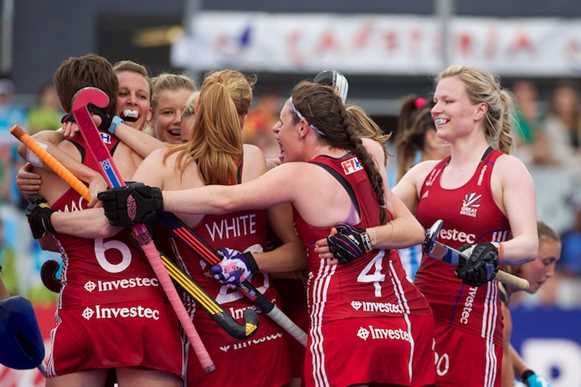 Hockey World League Valencia: Spain are singing in the rain

Heavy storms caused more than an hour's disruption on day three of the Hockey World League Semi-Finals in Valencia but the rain didn't dampen the host's spirit as they outplayed Canada.

The opening match of Pool A on day three saw Great Britain take on Argentina in a fiercely contested game with little to separate the two sides. The clearest chance in the first half fell to Alex Danson from the penalty spot but her effort, however, pinged off the outside of the post. Maddie Hinch ensured that it remained scoreless into the big break when she poked out a leg to kick away a Carla Rebecchi drag-flick.

Hannah MacLeod broke the deadlock, though, seven minutes after the restart. She pounced when Danson’s shot was half-stopped by Belen Succi, lifting the ball up and over the prone goalkeeper for a key goal.

Argentina responded with vigour, winning numerous corners and causing plenty of danger with a string of big chances but Hinch was not to be beaten. GB held their nerve and caused their own problems with the swift running of Susannah Townsend a factor. From a corner in the 58th minute, Kate Richardson-Walsh’s sweep was charged down but Lily Owsley swooped to get the ball into the danger zone where Bray nipped in to score.

Maddie Hinch, speaking after the game said: "That was a massive team effort. The goals were scrappy, but we don't care about that. We were playing probably against the best forwards in the world and we worked hard to negate that.

Carla Rebecchi spoke of her disappointment at the result. "We were good in the press and we got to the ball well, but we didn't take our chances. We had penalty corners, but they just didn't go our way today."

Great Britain's goal scorer, Sophie Bray added: “We are really happy; they are a great side and third in the world. It gives us great momentum. Coming into the game, one of our mantras was just to believe! Believe we have the capabilities in the team to beat team and it showed.

“Two wins and two clean sheets; our defence were awesome today and so was Maddie [Hinch]. We will get back to the hotel, recover well and look forward to playing Canada tomorrow.”

Spain delighted their rain-soaked home fans with a comfortable 3-0 victory over Canada to reach the quarter-finals, joining Great Britain who also advance as a result.

The first half was a low key affair which ended scoreless. The best of the chances fell to Spain for whom Maria Gomez was the main threat. From one thrust, she won a corner when she out-stripped Natalie Sourisseau on the right who picked up a yellow card for her foul.

Just as the sides were ready for the second half, the lightning cracked and thunder roared with the accompanying rain teeming down. It led to a break of an hour and 19 minutes. The volunteers, with their multi-coloured brushes performed wonders to remove all the excess water.

After the delay, it was the Spanish who kept their wits about them and they took just a few minutes to capitalise. Berta Bonastre stole the ball in midfield, thrust forward before slipping the ball under her arm to Roccio Ybarra. Her effort was more of a cross than shot but it had enough direction to evade both the back-pedalling defence and her team mate who eventually stepped out of the way to let the ball plane through the water and just over the line.

Lola Riera added her second drag-flick goal of the tournament with 11 minutes left to add some extra insurance to their position. And they added an extra gloss to the scoreline when Beatriz Perez tore down the right wing. Her cross popped off a couple of near post sticks into Gomez’s path. She volleyed in via Sara McManus’s face, leading to a video referral but the goal stood for 3-0.

Speaking after the game, Berta Bonastre said: “This victory was so nice. In the first half, we were a little bit afraid because they are quite physically strong team. But we kept trying to find a way into the circle and make chances. “In the second half, I don’t know if the pause helped but we found some really good moments, pressed much harder and found the goals. “In breaks like this, you have to concentrate because you can think outside the match and it becomes difficult to get your head back into the match. But our coach repeated our game plan and we all knew what we had to do.”