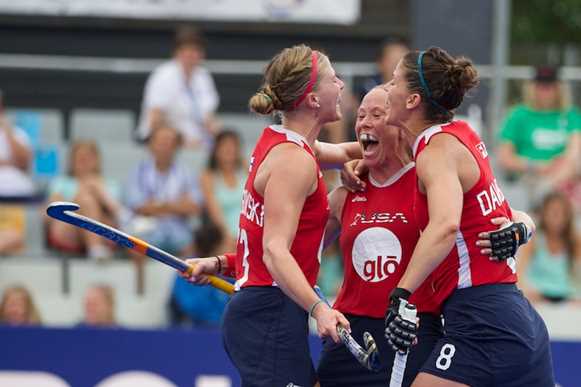 Rain in Spain is rare, but it certainly put in an extended stormy appearance on day three of the Hockey World League Semi-Finals in Valencia, keeping the players in the final match of the day waiting for an hour and 19 minutes between half time and the start of the second half.

It was eventually a celebration for the hosts as they joined Ireland, USA and Great Britain on the winning sides, after a 3-0 win over Canada. The result means the four winning teams progress to the quarter-finals.

The first match of the day was a close-fought affair between Ireland and Uruguay, with the South Americans scoring their first goals of the competition, as they ran the Irish to the wire in a tight 3-2 encounter. Aine Connery was the hero as she scored the 55th minute winner that saw Ireland become the first side guaranteed to make it through to the quarter-finals as they survived a second half onslaught.

Florencia Norbis, speaking after the game, spoke of her side overcoming their early tournament nerves to play "the game we are capable of."

While the Irish looked to be in control at 2-0 up. Anna O’Flanagan and Nikki Evans put Ireland 2-0 up in the early stages of the game. But indiscipline was nearly the undoing of the Green Army – they ended with four yellow cards and two green – as first Janine Stanley, then Manuela Vilar got on the score-sheet to even things up. Ireland replied, though, with a solid final quarter and won a couple of corners, one of which Cliodhna Sargent swept to Connery to guide home for the victory.

The USA made it two wins from two as they came from a goal down to beat South Africa 4-1. Dirkie Chamberlain had given South Africa an early lead when she burst through and planted the ball past Jackie Briggs. But the Americans were in aggressive mood and they set about dismantling the South African defence in a powerful show of defiance.

Captain Lauren Crandall – on her 250th international appearance – pumped a corner shot at goal which took a nick off a defender and hit the net for 1-1. Katelyn Falgowski – another celebrant on her 200th cap – added the second in brilliant style, exchanging passes down the right with Michelle Vittese and slamming home from mid-circle.

Kat Sharkey made it 3-1 and Jill Witmer completed the win in the last 90 seconds of the game.

A scrappy couple of goals were the difference between Great Britain and Argentina, with Great Britain picking off two real poacher’s goals to beat Argentina 2-0 in a crucial Pool A clash. Hannah MacLeod and Sophie Bray were the scorers, both diving on to close range chances, getting in ahead of multiple Argentine defenders.

Prior to that, Alex Danson had seen her penalty stroke ping off the outside of the post.

MacLeod broke the deadlock seven minutes after the restart. She pounced when Danson’s shot was half-stopped by Belen Succi, lifting the ball up and over the prone goalkeeper for a key goal. GB held their nerve and were rewarded in the 58th minute, when Lily Owsley swooped on a penalty corner rebound and Bray nipped in to score from her cross.

Spain delighted their rain-soaked home fans with a comfortable 3-0 victory over Canada to reach the quarter-finals.

The first half was a low key affair which ended scoreless. The best of the chances fell to Spain for whom Maria Gomez was the main threat. From one thrust, she won a corner when she out-stripped Natalie Sourisseau on the right who picked up a yellow card for her foul.

Just as the sides were ready for the second half, the lightning cracked and thunder roared with the accompanying rain teeming down. It led to a break of an hour and 19 minutes. The volunteers, with their multi-coloured brushes performed wonders to remove all the excess water.

After the delay, it was the Spanish who kept their wits about them and they took just a few minutes to capitalise. Berta Bonastre stole the ball in midfield, thrust forward before slipping the ball under her arm to Roccio Ybarra. Lola Riera added her second drag-flick goal of the tournament with 11 minutes left. And they added an extra gloss to the scoreline when Beatriz Perez tore down the right wing. Her cross popped off a couple of near post sticks into Gomez’s path. She volleyed in via Sara McManus’s face, for 3-0.

Speaking after the game, Berta Bonastre said: “This victory was so nice. In the first half, we were a little bit afraid because they are quite physically strong team. But we kept trying to find a way into the circle and make chances.

“In the second half, I don’t know if the pause helped but we found some really good moments, pressed much harder and found the goals.

“In breaks like this, you have to concentrate because you can think outside the match and it becomes difficult to get your head back into the match. But our coach repeated our game plan and we all knew what we had to do.”