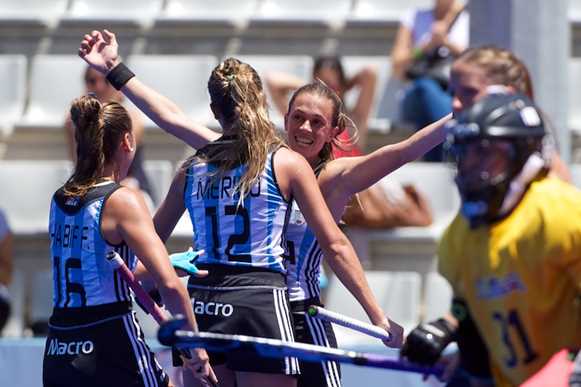 Argentina moved to within touching distance of an Olympic berth as Carla Rebecchi inspired them to a 3-0 victory over USA in the Pan-Am El Classico.

Rebecchi fired home a corner rocket before unleashing a stunning backhand shot to build a 2-0 lead at half-time and Noel Barrionuevo whizzed home another from a set piece to kill off the second quarter-final of the Hockey World League Semi-Final in Valencia.

It was a superb performance from Las Leonas who move a huge step towards Rio in 2016. USA did start well, drawing some big saves from Belen Succi with Paige Selenski and Michelle Vittese buzzing around up front. But once Argentina found their mojo, they were not going to be denied.

Rebecchi’s 17th minute corner set the tone, finding a low route past Jackie Briggs. They continued to squeeze the life out of the USA defence and the press allowed Florencia Habif to intercept and quickly feed the ball into the circle for Rebecchi. With nimble feet, she got out of Briggs’s reach and, moving away from goal, pinged the ball into the top corner.

Barrionuevo made the result even more certain, setting up a semi-final date with China while USA go into the fifth to eighth place playoffs against Ireland.

Argentina's Macarena Rodriguez Perez, said: “It was such an intense battle because each side knows each other really well. The goal just after the first quarter was a definitive moment and then we were able to build confidence in the way we play.

“The side is growing up and learning how to build towards Rio in the best form. Because we don’t now have the best player in the world like last year, this tournament is a really good tournament to help us prepare and grow for Rio in 2016.”

USA coach Craig Parnham said: "We started well and we created a number of chances, but we fed Argentina some scraps and they took them. That put us in a chasing position."