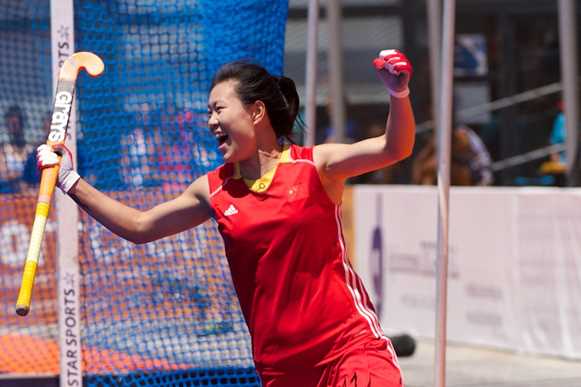 China battle through seven round shoot-out to beat brave Ireland

"I had dreamed of how I would score this goal," said Liang Meiyu, as she proved the shoot-out hero for China in their hard-fought game against Ireland.

China became the first side through to the semi-finals of the Hockey World League Semi-Final in Valencia as they withstood 15 penalty corners to eventually beat Ireland in a shoot-out. Liang Meiyu was the one to hold her nerve and slot the winner in the seventh round of the shoot-out to seal the deal after a scrappy match packed with drama.

China got off to a flying start when Zhang Xiaoxue latched on to a long overhead pass and found a narrow gap at the left post to flick in the first goal after five minutes. From there, the Asian side sat deep and soaked up pressure before counter-attacking at speed.

Ireland did win plenty of corners – eight in the first half – while Katie Mullan was also denied by Li Dongxiao. The second half followed a similar pattern with Ireland running up seven more corners but they scarcely threatened from the set plays.

Chloe Watkins, however, did equalise with a slap from close range after Kate Dillon’s pass. Megan Frazer then shot home a corner chance but the second goal was disallowed on an umpire’s referral.

It meant the tie went to a shoot-out and the first series of five ended 3-3. The next three were all saved before Liang raced left and slid in the winning shoot-out for a 4-3 success.

Speaking after the game, Liang said: "I was very confident and knew exactly where I would score, we were very well prepared and had been practising since before we travelled to the Netherlands in preparation for this tournament."

Cui Qiuxia explained just what this meant to her team: "This was out last shot at a place at the 2016 Olympics. We knew what we had to do, there was no-where to go."

Darren Smith, coach of Ireland, said: “It’s devastating to lose in a shoot-out. All you want is that ticket to Rio and we will do all we can to try and get that. We put our heart and soul into that match. We could have been more clinical from our penalty corners. They defended them pretty well but it was a tight and tough match.”