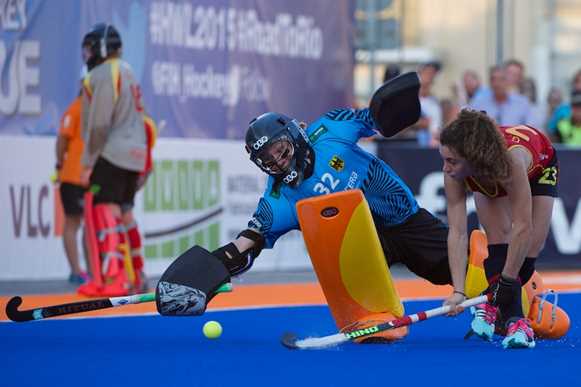 Germany are never out of a competition until they are on the bus home. So said Janne Muller-Wieland, and her words were proven prescient as Germany won their encounter with Spain in dramatic fashion.

Franziska Hauke was the German heroine as she scored two nerveless shoot-out goals to see her side through to the Hockey World League Semi-Final last four, beating Spain in sudden death after normal time had ended 1-1.

On a couple of occasions, Germany looked to be on their way out of the running, trailing 1-0 with nine minutes left of normal time and also 2-0 in the shoot-out before they came back to win it 3-2.

Germany had the best of the opening exchanges but Maria Lopez de Eguilaz was equal to everything thrown at her. When she was beaten, Rocio Gutierrez did the mopping up work, one time clearing off the line, the other in slightly fortuitous fashion as she half-stopped the ball onto her body. A video referral deemed it another corner and not a stroke.

Spain, though, were having their moments as Roccio Ybarra first-timed one shot just wide while a couple of corners in the last minute of the half were also spurned.

And they carried that momentum into the second half, creating a string of chances which Kristina Reynolds needed to be on top form to keep out. Twice, she was drawn into double saves in quick succession. She was eventually beaten when Carlota Petchamé lined up a shot only for a German defender to impede her. Lola Riera kept her calm to make it 1-0 from the penalty spot with 18 minutes to go.

Germany got level with just under nine minutes to go when Charlotte Stapenhorst embarked on a stunning, 3D run down the right flank before pushing across the face of goal via Franziska Hauke to where Eileen Hoffmann was on hand to finish off.

Spain had a couple more chances to win it but Germany stayed on terms, forcing the game to the shoot-out.

The hosts built a 2-0 lead straightaway but Germany clawed back the deficit with Reynolds again heroic while Hauke equalised in the fifth round before scoring again in the first round of sudden death.

Moments earlier, Reynolds made an incredible stick-save to deny and Gigi Oliva, setting up the victory.

Germany next face Great Britain in the semi-final while Spain will meet South Africa in the classification matches.

Germany's Janne Muller-Wieland said: “We are delighted. It was a big drama and so German of us! Especially after being down 1-0 and then coming back in the shoot-out. It was just amazing and I am so proud of the girls and I want to say we deserved it.

“There are rumours about us that we are never beaten until we are on the bus on the way home. I am quite happy today that this was the case. We fight until the last minute and the last second.”

“GB will definitely be a tough challenge but we definitely want to beat them and not be hanging on and calculating whether we have the Olympic spot or not. We didn’t think about it before now. Tomorrow we will think about it properly but, for now, we are just happy.”