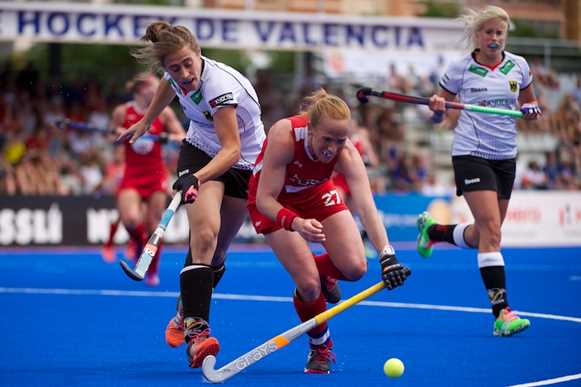 USA and Germany slug it out, while Uruguay get first point on board

It may have been honours even in both Pool B matches, but these were scintillating affairs. The opening game between Uruguay and South Africa was end-to-end, but with few open chances, while the second match was a physical battle of the highest order.

Uruguay recorded their first point of the competition, when Manuela Vilar scored in the 58th minute. Her equaliser meant that nothing is formally decided for the fourth quarter-final spot between Uruguay and South Africa after they shared a 1-1 draw.

The first half was an even affair. Uruguay forced four corners, while South Africa had the pick of the chances when Jade Mayne burst into the circle and was only denied by an excellent stick save from Rosanna Paselle. Celia Evans got the critical breakthrough in the 38th minute from her side’s first corner, a sweetly executed routine that saw a stepover at the top of the D before it was slapped by Dirkie Chamberlain to the injector spot. Evans adjusted her hands quickly to turn the ball home.

But Uruguay managed to summon up a corner with a couple of minutes remaining and Manuela Vilar strode forward – under little pressure from the runners – to the middle of the circle and powered home her drag-flick.

The result means the two sides are level with one draw to their name but South Africa have one game left in order to pin down their place in the last eight.

Dirkie Chamberlain (RSA): “We’re obviously very frustrated. We took a long time to get going. Again, focus in the last quarter [was an issue]. It seems like teams are always scoring against us in the last few minutes so that’s something we need to look at and fix."

Manuela Vilar, who scored Uruguay's last minute equaliser, said: "We knew we had to score. We had been playing well but not scoring, luckily this went in. We had studied how South Africa defended corners. so we had a plan."

Katie Reinprecht said she was "really pleased to have scored twice against Germany" in her side's 2-2 draw. The match was a real showcase event, with innovative attack being foiled by outstanding 'keeping.

Reinprecht opened the scoring, getting on the end of a superb team move, half-volleying home first time from Michelle Vitesse’s backhand cross. And they continued to be the more aggressive force for much of the first half though Germany did have some great chances to equalise.

The game turned, though, around the 39th minute as Germany scored twice in quick succession. First, Kristina Hillmann picked out Lisa Altenburg who worked the ball home and then a minute later, Hannah Kruger drove home a penalty corner to make it 2-1 to the Germans. "We were pleased with the way we turned the game around," said German captain Anne Schroder.

The US battled back once again and had their leveller when Kelsey Kolojejchick, amid heavy traffic, weaved into some room to roll the ball across goal where Reinprecht was able to nab her second goal. Germany did have a corner in the final minute but USA held on for the draw. They will battle it out again on Tuesday afternoon against South Africa and Ireland, respectively, to see who claims top spot.