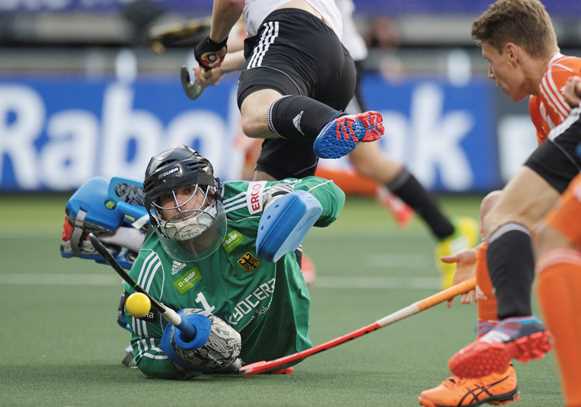 Germany, Argentina, Spain, Canada and Austria are playing off in Pool B at the Argentina Hockey World League Semi-Final in Buenos Aires. Let us provide you the key facts on them.

GERMANY – current world ranking 3
One of the undisputed giants of global hockey, Germany have been a powerhouse of the game for decades and the current group is certainly no different. They are the current holders of the Olympic, European and Champions Trophy titles and are always capable of winning every tournament that they enter. Germany’s squad contains some of the most gifted players in the game, including two winners of the FIH Men’s Player
of the Year Award – Tobias Hauke (2013) and Moritz Fürste (2012). Another player to watch is 21-year-old rising star Christopher Rühr, the FIH Young Player of the Year for 2013, who has already proven himself to be an explosive game-changer with a very bright future ahead of him. Germany recently faced Pool B opponents Argentina in a two match series in Hamburg, with Moritz Fürste scoring twice in a 4-2 victory in the opener
before Argentina levelled the series with a 2-1 win in the second and final match.

ARGENTINA – current world ranking 6
2014 Pan American Champions Argentina have always produced international teams with plenty of talent, but over the past two years the current men’s team has developed into a side that can challenge the very best in the world. Coach and former Argentina international Carlos Retegui – the man who, remarkably, guided both the men and
the women’s national sides to Bronze medals at the Rabobank Hockey World Cup - is overseeing the revolution, helping “Los Leones” to realise their massive potential.
Key players include free-scoring attackers Lucas Vila, Matias Paredes and Facundo Callioni as well as defender and dragflick ace Gonzalo Peillat, who was named FIH Young Player of the Year for 2014. Argentina are definitely expected to be among the front-runners to grab a place on the podium and secure that all important ticket to the Rio
2016 Olympic Games.

SPAIN – current world ranking 11
Spain may have dropped down the FIH Rankings Table in recent years but they remain a supremely talented team that should not be underestimated. Under the stewardship of Head Coach and former France international Frederic Soyez, a talented new generation of Red Sticks players are working hard in a bid to return Spain to an era of greatness that culminated in an Olympic Silver medal at the Beijing 2008 Olympic Games. 24-year-old speed merchant Xavi Lleonart is developing into a fantastic attacker, while Gabi Dabanch, Sergi Enrique, Miki Delas, Pau Quemada and brilliant goalkeeper Quico Cortes bring masses amounts of world level experience to the table.

CANADA – current world ranking 16
The Pan American giants Canada booked their place in the Semi-Final phase of the Hockey World League with a solid showing at the Round 2 event in San Diego, where they finished in third place. The Maple Leafs won five of their six matches at the tournament, losing only to higher ranked Ireland in the competition semis before crushing Russia 4-1 in the third place play-off to secure a safe passage through to the Olympic qualification phase of the HWL. Canada recently produced a fine display at the 2014 FIH Champions Challenge in Kuantan, finishing in second place behind Korea but ahead of fellow HWL Semi-Final competitors New Zealand and Japan. Scott Tupper, Mark Pearson and Matthew Guest were star performers at that tournament and are likely to play an influential role for their team in Buenos Aires.

AUSTRIA – current world ranking 22
Austria may well be the lowest ranked team in the tournament, but their epic journey to
the Semi-Finals will serve as a reminder to all that they are capable of big things at this event. The Europeans have battled their way through two qualifying rounds to reach this stage of the competition, thrashing all opponents at the Round 1 event in Lousada, before claiming a simply stunning second place finish at the Round 2 competition in San
Diego. Despite falling to a narrow 2-1 defeat against Ireland in the final, the team recorded victories over Russia, Chile, USA and Italy to put the 2015 World Indoor Silver medallists into the Olympic qualifying phase of the Hockey World League. Captained by mercurial midfielder Benjamin Stanzl and inspired by the goals of ace striker Michael Körper, Austria will give it absolutely everything in their bid to seal a first Olympic appearance since the 1952 Games in Helsinki.