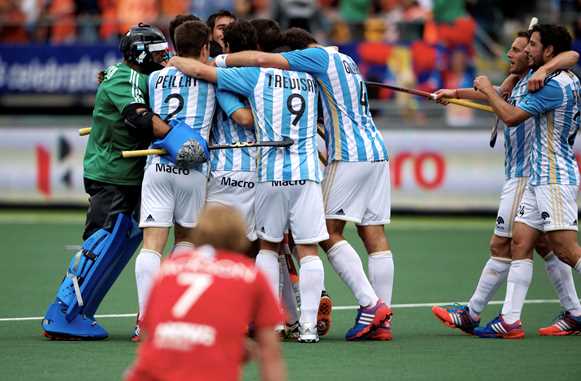 A place at the Hockey World League Final and a ticket to Rio are the rewards awaiting the teams competing in Argentina.

“We want to directly qualify for the Olympics. This is part of our job,” says German coach Markus Weise. The Olympic champions are definitely among the favourites in Buenos Aires, alongside strong contenders from the Netherlands and host nation Argentina. However, there are a few teams that have the potential to surprise, including New Zealand and Korea.

Pool A in Buenos Aires will be contested by the current Olympic and World Cup Silver medallists the Netherlands, as well as New Zealand, Korea, Japan and Egypt. Pool B sees Germany, host nation Argentina, Spain, Canada and Austria in action. The round-robin pool phase will take place over five competition days (3-9 June). Following the round-robin, the top four teams in each pool will move into the crossover quarter-final phase, while the teams that finish fifth in each pool will play off for 9/10 place. The winners of the quarter-final matches will move into semi-finals and the medal games, with the losing teams playing for placement.

“Everyone is coming with the ambition to qualify for the Olympics directly from here,”  says Black Sticks coach Colin Batch. “Then you don’t have to go through the continental championships.” Asked who he thought was the favourite to win the Argentina World League Semi-Final in Buenos Aires, Batch added: “I think Argentina are the favourites. They play at home and they know the conditions.” In the pool stage Batch sees the Netherlands as “very difficult to beat.”

The Black Sticks will open the tournament on Wednesday at 14:00 local time with their match against Egypt. Afterwards the crowd will see an Asian encounter with Korea taking on Japan. Korea coach Shin Seokkyo hopes that his team make the top three although he is aware of the strength of the others: “This is a very strong tournament, so it will be tough to win a medal. A top four finish would also put us in a good position to qualify for Rio. But we definitely want to win the quarter-final and I expect us to do this.”

The Netherlands will start their World League Semi-Final affair on Thursday against Egypt. “We came here to win every game. Getting a ticket for Rio would be our reward for winning every game,” states Dutch coach Max Caldas. “For us it is important to learn how to play against the top teams and how to beat them.” Caldas points out that six of the 10 participating teams in Buenos Aires qualified for the Rabobank Hockey World Cup in 2014.

Caldas, who recently led the Dutch women to the world cup title, added “They are all hard to beat. I think especially Germany are very well prepared and also New Zealand brought a complete senior team. However, I have a lot of trust in my players that they will be very good.”

Spain and Canada will open the pool B competition on Wednesday, followed by Argentina facing Austria. “We will take it game by game. I am very happy to play here in Buenos Aires,” says Argentine coach Carlos Retegui. “It is our main objective to qualify for the Olympics and this is why we were training so hard,” says Matias Paredes. “I hope that the spectators will push us.”

Austria’s captain Benjamin Stanzl explains: “It was our goal to reach the World League Semi-Final although it might be a surprise for other nations that Austria had qualified. We will see what we can expect now, it will be interesting to play four pool matches. We know that we need to win at least one game to keep our chances open to reach the quarter-final. It is our goal to win points against Spain or Canada.”

The Olympic champions from Germany open their account with their match against Spain on Thursday. A lot of action and breath-taking matches are guaranteed, so let’s get started!