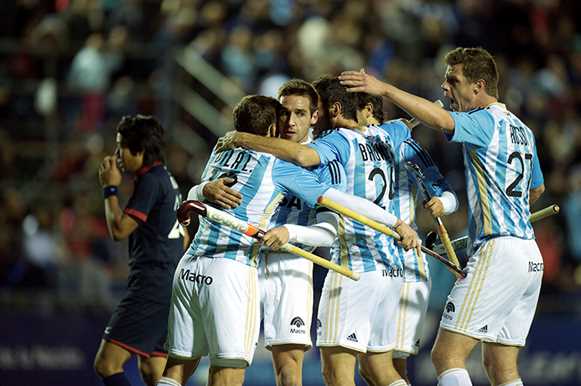 Canada will take on Argentina with Germany facing the Netherlands in Saturday’s semi-finals at the Argentina Hockey World League Semi-Final in Buenos Aires.

The 5-8 classification round sees Korea playing Spain with New Zealand taking on Japan.

Let’s take a closer look at these knock-out matches!

Canada will face Argentina in an Panamerican semi-final. Both teams have already met in pool B with Argentina winning 2-1. Canada battled their way into the semi-finals with a breath-taking 8-7 shootout victory against New Zealand. This quarter-final was tied at 0-0 after regulation time before it went into a dramatic shootout with Adam Froese scoring the winner after 14 rounds. “This Pan American semi-final will be good. We play Argentina a lot and also in a lot of important finals. They have got the home crowd but we have a lot of positive energy going right now. So we are going to come out really hard,” says Froese.

Argentina qualified for the top four through their 2-1 win over Japan. Top scorer in the Leones squad is FIH rising star 2014 Gonzalo Peillat who has scored four goals in this tournament so far making him joint top scorer. Team-captain Matias Paredes said “The corners and the circle penetrations will be the key to beat Canada. In our pool match their keeper Dave Carter saved a lot, so we need to ensure that we convert our chances.”

Germany and the Netherlands set up an European encounter in the semi-finals. Both teams know each other very well. They also met in the London 2012 Olympic Final where Germany grabbed the Gold medal following a 2-1 win. The Olympic champions reached the top four after a deserved 2-0 victory over Korea in Thursday’s quarter-final. Knowing that the ticket for Rio 2016 hasn’t been completely saved yet, coach Markus Weise said: “We definitely want to reach the final to ensure that we are qualified for the Olympics. We would like to avoid any calculations in case we finish fourth.” FIH rising star 2013 Christopher Rühr is top scorer in the squad having scored on four occasions.

The Netherlands are still unbeaten in Buenos Aires following the win of pool A and a 3-1 victory against Spain in the quarter-final. Mink van der Weerden joins Rühr & Co. on top of the tournament scoring list having also scored four goals so far. “As far as I have seen Germany here, they took a really good team which is playing very well. It will be a tough game. We need to take a look on the video to find out the key to beat them,” van der Weerden adds.

Day 7 in Buenos Aires will kick off with Spain taking on Korea in the 5-8 classification at 10.30 local time. “Korea is a tough team. We need to play our best hockey. We need to do more than in the quarter-final and with a bit of luck we can win it. We have to keep going to get the Olympic ticket,” said Spanish captain Manel Terraza. The Red Sticks lost their quarter-final 3-1 to the Netherlands while Korea were defeated 2-0 by Germany. The current FIH world ranking sees Spain on rank 11 with Korea being ranked 8th. The Koreans Lee Namyong and Nam Hyunwoo have scored four goals each in this competition so far, same as Spanish Pau Quemada, making them joint top scorers with Peillat (ARG), van der Weerden (NED) and Rühr (GER).

The second 5-8 classification match will see New Zealand facing Japan at 13.00 local time. The Blacksticks were deeply disappointed after the 8-7 loss against Canada in a heartbreaking shootout. “The Olympic dream is not over,” said Shea McAleese knowing that a 5th place finish in Buenos Aires would still mean good chances on an Olympic berth. New Zealand defeated Japan 2-1 in pool A. Top scorer in the Blacksticks team is Simon Child with three goals. Despite having grabbed just one win against Egypt so far, the Samurais will give everything to play off for the 5th place in Buenos Aires. Japan had lost their quarter-final 2-1 to host nation Argentina.