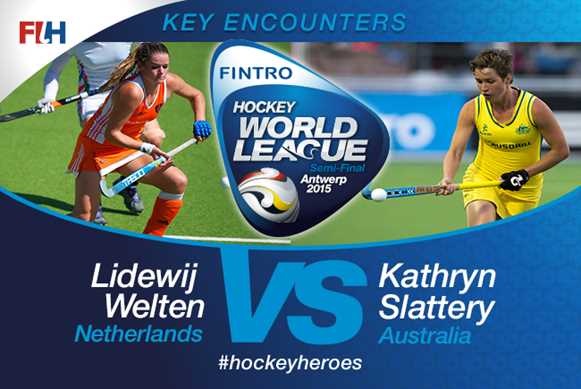 Young guns aim to fire their team to the top

Antwerp will be hosting two of the men’s and women’s Hockey World League Semi Finals, and while there will be mouth-watering fixtures throughout both tournaments, one of the most eagerly awaited encounters will be between the world number one and world number two women’s teams.

The Netherlands versus Australia; Oranje versus Hockeyroos; Hoog versus Flanagan; Sombroek versus Kenny; Paumen versus Blythe - sub-plots and dramas are inevitable as the two best hockey nations aim for the top spot in Antwerp. There is a triple prize for the victor - possible Olympic qualification, a place at the Hockey World League Finals and, of course, the confidence that finishing above close rivals will bring.

The teams are competing in different pools, so there is no guarantee they will meet, but if both teams play to their potential then an encounter in the play-off stages is likely. In recent times the Netherlands has enjoyed the upper hand. A 2-0 win against Australia in the final of the 2014 Hockey World Cup was the pinnacle of achievement for the Dutch team, cementing their place as the number one team. Paumen and company are currently World Cup holders and Olympic Champions – a title the Dutch defended at London 2012.

Australia, by contrast, are a team that has been through a long period of rebuilding.  At the 2000 Sydney Olympics, the Hockeyroos were the world leaders in the sport. Not only did they dominate the field of play, they also were the first team to introduce the hockey tunic, an all-in-one garment that soon became de rigueur. The team, which contained hockey greats such as Alyson Annan, Rechelle Hawkes and Nikki Hudson – was named Team of the Century at a glittering ball in Canberrra.

But now, the Hockeyroos, led by former Australian international Adam Commens, has its eye firmly on the future and those past glories are consigned to history. The recent Champions Trophy saw a swing towards the Hockeyroos as the team took silver after losing out on shoot-out to Argentina in the final. The Netherlands had to settle for bronze.

In the battle for hockey supremacy, many players emerge as would-be heroes. Some, such as Paumen, Hoog or Flanagan, already hold icon status. But there are also stars in waiting, and in Antwerp, two players who are likely to make an impact are 24-year-old midfielder Lidewij Welton and Hockeyroo forward Kathryn Slattery.

Welton already has two Olympic medals and a World Cup to her name. She had played just 13 times for the Dutch senior team when she picked up a gold medal at the 2008 Beijing Olympics and by London 2012 she was an integral part of the team. At the Champions Trophy in December 2014, after the Netherlands were beaten in the semi-finals by eventual winners Argentina, Welton spoke of the hunger in the Dutch squad to rebuild, reshape and chase more international success.

One of the Australian players who shone at the Mendoza Champions Trophy for the Hockeyroos was squad newcomer Kathryn Slattery. With only 15 caps to her name, the forward was always one of the busiest players on the pitch. Her harrying style of play and ability to get into goal-scoring positions will doubtless be a big plus as the Hockeyroos seek to win at Antwerp and seal their passage to Rio with just over a year to go.