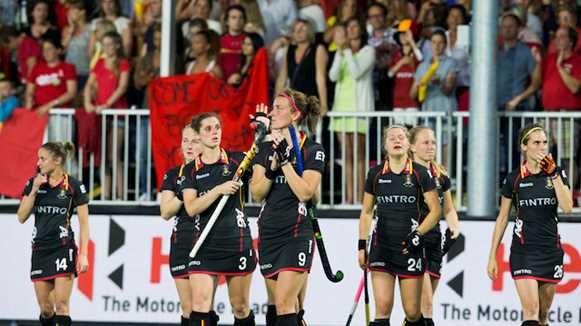 Australia, New Zealand, Netherlands and Korea sealed their places in the final four on a baking hot, drama-filled women’s quarter-final day at the FINTRO Hockey World League Semi-Finals in Antwerp.

They overcame the respective challenges of Italy, Japan, India and host nation Belgium to reach the final four and book their tickets to the prestigious end of year Hockey World League Finals that will be played in Argentina. They will be joined in that event by Great Britain, China, Germany and Argentina, who all achieved qualification by securing top four finishes at the recent Hockey World League Semi-Final event in Valencia.

The game of the day was undoubtedly Korea versus Belgium, with the Red Panthers being just seconds away from a place in the competition semi-finals before the Asian Games Gold medallists broke Belgian hearts with a late equaliser followed by a dramatic shoot-out win.

The women’s semi-finals will take place on Thursday 2nd July, with Australia facing a mouth-watering clash against the Netherlands while Korea will go head-to-head with New Zealand. More details on today matches can be found below, with the match schedule for the quarter-finals available by clicking here.

Australia 2-0 Italy
Australia have taken one step closer to securing a place in the Rio 2016 Olympic Games by defeating Italy in the opening quarter-final of the day in Antwerp.

The Aussies dominated possession and circle penetrations but were guilty of wasting numerous chances in front of goal. However, their penalty corner aces were firing on all cylinders, with Jodie Kenny and Anna Flanagan both finding the goal with powerful drag-flick efforts. Kenny’s strike was her tenth goal of the competition, with Flanagan doing her confidence the world of good with a sensational effort that sailed a fraction under the cross-bar to bag her first goal of the event.

“It was difficult and we are happy to come away with a win but they made it very hard for us in the circle”, said goal-scorer Anna Flanagan. “We were getting in there a lot but they really made it tough for us. We try to take it one game at a time, but we know what is at stake here. We are here to win it but we are going to need to be a bit more clinical in the circle if we are going to win the next game.”

Goals from Petrea Webster, Sophie Cocks, Anita Punt, Kirsten Pearce and Gemma Flynn took New Zealand within one win of landing a place at the Rio 2016 Olympic Games, something that they will be certain of if they win either their semi-final or, failing that, the third-place play-off game. Japan will now compete in the 5-8 classification places.

“It was a really good game for us and a really good lead up into the semis”, said Black Sticks goal-scorer Kirsten Pearce after the match. “To be honest, I think we came out firing in the second half and we really wanted to win it. We really want to beat the best teams and put our best efforts into achieving that.”

Netherlands 7-0 India
World number 1 the Netherlands have set up a mouthwatering final four clash with world number 2 Australia courtesy of a comprehensive 7-0 quarter-final victory over India.

The reigning World, Olympic and HWL champions were in imperious form against India’s Eves, who battled hard but found it tough going against the Pool A winners. Caia van Maasakker stepped out of Maartje Paumen's shadow to score a hat-trick of penalty corner drag-flicks for her side, with Lidewij Welten (2) and Gisela Zerbo also finding the target after Naomi van As opened the match scoring in the very first minute.

“We are very happy with this win as we worked hard and played hard, so I think it is a good result”, said triple scorer Caia van Maasakker in the post match interview. “We were very focussed and kept playing together so it we did pretty good. It was nice to score a hat-trick - I got the chance today and I scored, so that was cool of course.”

Korea 2-2 Belgium (3-0 SO)
Host nation Belgium suffered an agonising shoot-out defeat in their quarter-final meeting with Korea, who scored a last minute equaliser before breaking Belgian hearts in a dramatic final match of the day.

An early penalty stroke from Park Mihyun gave Korea a lead that they held up until the third quarter before goals from Louise Versavel and Manon Simons put Belgium within touching distance of a place in the final four. However, a long pass from defence picked out Park Mihyun, who caused havoc in the Belgian circle before Cheon Eunbi slammed home with just 35 seconds remaining. It proved to be a killer blow for Belgium, who went from ecstasy to despair in a matter of minutes as Korea’s Jang Soo Ji gave a masterclass in goalkeeping to keep a clean-sheet in the shoot-out to send her team through to the HWL Finals.

“We made a little fault, but it can happen, that is sport”, said a disappointed Stephanie de Groof after the game. “We knew that the match is only finished after the last second and maybe we were already too early in Rio, so for now it is a disappointment. We have two days to rest and focus on our next game because we still have a ticket to win.”

De Groof’s final sentence was telling, as although her team have missed the chance to qualify for the HWL Final, a fifth or sixth place finish here in Antwerp would keep alive their chances of achieving Olympic qualification after the completion of the Continental Championships.

To see an infographic mapping out the Road to Rio, click here.